Apple's iPad Lineup Is Suddenly More Complicated Than Ever. Here's How to Pick

Apple made a surprise hardware announcement Monday, unveiling updated versions of its iPad Air and iPad Mini. Each of the refreshed iOS tablets has more processing power and higher-quality display, not to mention support for the first-generation Apple Pencil stylus.

It’s always nice to see a spec boost, especially in the iPad Mini, which has gone about two years without a major refresh. But if you’re in the market for an iPad, your life suddenly became significantly more complicated. Apple now offers four tablets worth considering, including the iPad, iPad Air, iPad Pro and iPad Mini.

Having options is great, but it might make it difficult to figure out which iPad is the one you actually want, or has the features you’ll actually use. With that in mind, here’s a breakdown of the new iPads.

The iPad Air and iPad Mini are more alike than not

Choosing between four different iPads means considering everything from screen size to accessory support. But Apple’s newest iPads, at least, are more like than not.

Both tablets share a great deal of hardware, including the front and rear-facing camera, a Touch ID fingerprint sensor, and Apple’s A12 Bionic processor, also found in the iPhone XS and XR. It also means both can take advantage of the augmented reality (AR) features found in various apps, including Apple’s own AR apps like Measure.

The screen sizes are different, of course — the iPad Air has a 10.5-inch screen, while the iPad Mini has a 7.9-inch display. But both displays are fully laminated, anti-reflective, and support automatic white balance adjustment, unlike the straight-up iPad.

Both also support Apple’s first-generation Apple Pencil for drawing and writing (as does the regular iPad.) Sure, the first-generation Apple Pencil’s design flaw often meant you would have to charge it using the iPad’s Lightning port — a real inconvenience when you consider that the updated version charges wirelessly when attached magnetically. But if that’s not a dealbreaker, having the option to get a capable stylus for quick sketches is definitely preferred over no stylus support whatsoever.

Unlike the iPad Pro, however, the new iPads do not use a USB-C connector. But users who haven’t migrated to USB-C just yet may find that a relief, especially considering that the updated iPad Air and iPad Mini include both a Lightning port and headphone jack.

The iPad Mini is small but powerful

The iPad mini ($399 and up) is just as capable as the larger iPad Air, but in a smaller package. Without its own smart keyboard accessory or smart connector, it’s not much of a laptop replacement for people who need to do a lot of writing or document-editing. But with its faster processor and improved display, the new iPad Mini is a small iPad capable of some serious creative work, including drawing or creating and editing media. That could make it an artist’s best friend. And of course it’s great for browsing the web, watching videos and other light tablet use, especially if you use a smartphone that’s more on the small side.

The iPad Air is a solid iPad Pro alternative

Apple’s iPad Air ($499 and up) shares its name with the old iPad Air line, discontinued in 2017 after the iPad Air 2, but goes bigger than before. Instead of a 9.7-inch display, the new iPad Air has a 10.5-inch display, putting it closer to 11-inch iPad Pro territory. It also reintroduces the anti-reflective coating and fully laminated display removed from the cheapest iPad, meaning you’ll get sharper images and won’t have to worry as much about bright sunlight. The iPad Air also brings the smart keyboard — previously an iPad Pro feature — to the table with its smart connector. If you’ve been holding out on an alternative to the iPad Pro with a smart keyboard, the new iPad Air could be right for you.

All these updates also mean Apple’s new iPad Air is as close as you’ll get to mimicking the most desired capabilities of Apple’s $799-and-up iPad Pro. You’ll still be missing out on the iPad Pro’s extra features, like the four speakers, adjustable refresh rate, USB-C support, and improved Apple Pencil. But if you, like me, have been holding out for a new iPad different enough to replace your last one, Apple’s updated classics might be what you’re looking for. 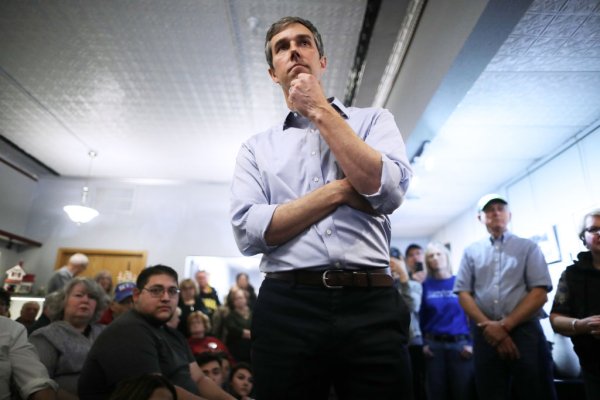 Beto O'Rourke Was Reportedly a Member of a 'Hacktivist' Group. What's That?
Next Up: Editor's Pick