'They Think They Can Silence Us.' How Nicaragua is Waging a War on Journalists

Nicaraguan journalist Carlos Fernando Chamorro looks at riot police standing guard inside the headquarters of his news outlet after a police raid in Managua on December 15, 2018.
INTI OCON/AFP/Getty Images
By Ciara Nugent

On January 1, Carlos Chamorro, one of Nicaragua’s most prominent journalists, packed his bags and snuck across the border with his wife. For months, he says, security forces from President Daniel Ortega’s authoritarian regime had been ramping up pressure on him and his colleagues to stop covering the political crisis that has gripped the Central American country of 6 million people since last April. In October, police set up a checkpoint outside his home, interrogating him whenever he stepped out. In December, they raided the offices of Confidencial and Esta Semana, the newspaper and television show that Chamorro, 63, has led for more than 20 years. As the New Year approached, sources told him authorities were planning to arrest him and fabricate a criminal case. “The aim is clearly dictatorial,” he tells TIME from exile in Costa Rica. “They think they can silence us.”

Over the past 11 months, since mass protests broke out against Ortega’s regime, the government has launched a widespread crackdown on free expression and critical media organizations. On March 7, the director of the Inter-American Press Society condemned Ortega’s “rigorous, schematic and systematic pressure” on the press and the “suffocation” of some outlets.

The targeting of journalists feels grimly familiar for Chamorro. In 1978 his father, Pedro Joaquín Chamorro, also a famous newspaper editor, was assassinated by the regime of right-wing dictator Anastasio Somoza. Back then, Ortega was the leader of the leftwing Sandinista Liberation Front, an armed resistance group fighting Somoza’s regime. Chamorro’s murder was a major factor in turning public opinion and bringing down the regime a year later. Ortega led a transition government for five years before being elected to a six year term in 1984. While in office, the leftist redistributed lands, expanded public healthcare, and fought off the Contras—right-wing rebels that the U.S. funded and trained as part of its attempt to stop the spread of Communism during the Cold War. (Chamorro’s mother, Violeta Barrios de Chamorro, was president from 1990 to 1997 after defeating Ortega in elections.)

But in recent years, critics and human rights groups say Ortega has become the kind of strongman he once fought to overthrow. After being re-elected in 2006, he pushed through changes to Nicaragua’s constitution that allow him to run for extra terms and make it harder for the opposition to win elections. Some voters and opposition parties boycotted the 2016 election, which Ortega won with his wife Rosario Murillo as his running mate. Many also accuse Ortega of corruption and of entering controversial alliances with businesses leaders, allowing them to dictate economic and labor policy. Meanwhile, the media had to operate under tight restrictions; in 2017 the Organization of American States found that journalists were experiencing intimidation, indirect censorship and a lack of access to public information and government events.

For all that, Chamorro says the regime “still tolerated criticism” from the press. “That’s precisely because they didn’t feel threatened. The government wasn’t really facing political or social opposition because it had been crushed, coopted, made illegal.”

That changed on April 18, when a small student-led protest against planned cuts to social security programs met with violent repression by police and paramilitary gangs. More protests broke out, quickly morphing into widespread calls for Ortega’s resignation.

“Immediately, we got a taste of what was to come,” Chamorro says of the crackdown on the press that began as Ortega sensed his grip on power weakening. The government ordered cable providers to take four independent news channels off the air, police and pro-government gangs beat up reporters and stole equipment from camera men. A radio reporter was struck in the head by a stick while broadcasting protesters’ clashes with the gangs on Facebook Live. Angel Gaona, a TV news reporter, was fatally shot in the head.

By the time the regime outlawed public protest in September, “effectively imposing an unofficial state of emergency,” according to Chamorro, more than 350 people had been killed — mostly by security forces and pro-government paramilitaries. Since then, Ortega has used the full force of the police and judicial system to try and stifle dissent. Political activists have been sentenced to hundreds of years in prison. In December Miguel Mora, the owner of news channel 100% Noticias, was arrested along with his news director, Lucía Pineda. Both were charged with terrorism and fomenting violence through their coverage. (They deny the charges). Their hearing has been repeatedly delayed. On March 18 a judge said it would take place on April 29. The pair remain in custody.

After the raid on Chamorro’s newsroom, armed guards took over the office in what Chamorro calls “an act of occupation.” Confidencial has remained online, operating from servers located abroad. Esta Semana had to move to YouTube after authorities threatened the owners of the television channel where it used to be broadcast, Chamorro says. He now leads a team of journalists, some also working in exile and some inside Nicaragua in clandestine conditions. “They’re working under very tense, precarious conditions. They get calls from people saying they know their every movement and they could capture them at any moment.”

Chamorro says that, despite the dangers his staff face, and the frustration of exile, he and many other Nicaraguans draw inspiration from his father. Before his father died, Chamorro says people used to ask him if he was afraid. “He’d always respond with what he claimed was a Mexican proverb: ‘Yes I’m afraid, but everyone is the owner of their own fear,’” Chamorro says, adding that he’s adopted that motto himself. “Every journalist, every university student, every priest, has to weigh their own risk and their own fear against the risks of living under a repressive dictatorship.”

Ortega has refused to step down, saying elections will be held on schedule in 2021 when his current five-year term ends. He has pledged to release some of the more than 600 people that the opposition classifies as political prisoners, in a bid to convince opposition leaders to negotiate an end to the crisis. But the day after the first 50 were released, authorities arrested another 107 at new protests on March 16.

Chamorro calls the current situation – in which Ortega clings to power but is struggles to govern a restive population – “an unsustainable state of siege.” He says that it will end in the collapse of the regime, as long as protesters keep demanding Ortega’s resignation and justice for what has happened, and if international pressure – including U.S. sanctions – remains in place. “At some point the dictatorship is going to unravel and then we’ll have a peaceful transition to democracy” he says. “I hope I’ll be there to tell that story.” 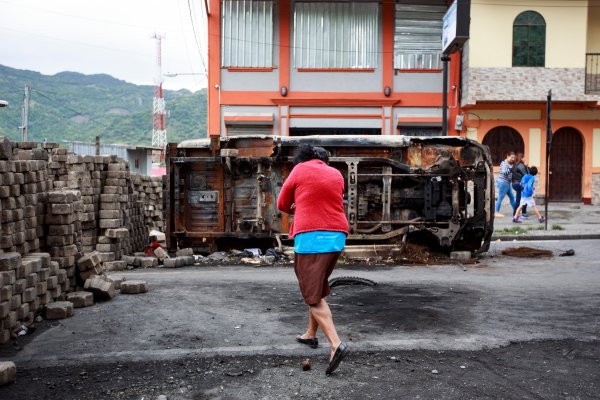 A Hundred Days of Protest in Nicaragua
Next Up: Editor's Pick