'You Are a Good Egg.' Fundraiser for Australian Teen Who Egged Senator Raises Over $30,000

A fundraiser for the Melbourne teenager who egged a controversial Queensland senator over the weekend has raised over $30,000.

Will Connolly, 17, rose to fame when a video of him throwing an egg at the back of Queensland Senator Fraser Anning’s head while talking to reporters Saturday went viral.

Anning sparked outrage when he blamed shootings in two New Zealand mosques on Friday that left 50 people dead and 36 people hospitalized on immigration. “The real cause of bloodshed on New Zealand streets today is the immigration program which allowed Muslim fanatics to migrate to New Zealand in the first place,” Anning said in a statement following the shootings.

In a recording of the incident, Connolly can be seen walking up behind the senator before raising his phone to take a video as he throws an egg at the back of the senator’s head. Anning reacts by turning around and punching the teen.

As of Monday, the GoFundMe campaign page titled “Money for EggBoi” had over 2,400 donations from people sending messages of support to Connolly, like “you are a good egg” and “omletting you know I think you’re eggcellent.”

According to the platform’s website, “EggBoi (Will) plans to send a majority of the money to the victims of the Christchurch terrorist attack.”

The fundraiser is not the only attention the teen has received. A mural depicting the egging incident popped up overnight in a Melbourne alleyway known for street art, and it is reported that several local Australian bands have offered Connolly free concert tickets for life.

The teen was initially taken into custody, but has since been released. Police are still investigating the incident, reports 7 News Melbourne.

The 17-year-old has been released. Police are still investigating the incident, reports 7 News Melbourne. 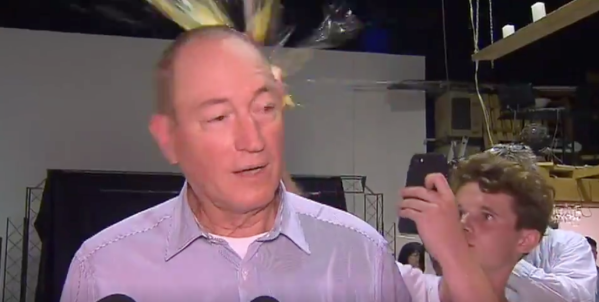 Australian Politician Egged by Teen in Viral Video
Next Up: Editor's Pick