There was no weekend vim and bustle in Christchurch on Saturday. New Zealand’s low-slung second city was cloaked in mourning, shops shuttered and residents zombified, struggling to comprehend Friday’s mass shooting that claimed 49 lives — the worst massacre in the history of this nation of five million.

Police continued to sweep for evidence outside the Al Noor mosque, where a lone gunman killed 41 people at 1:45 p.m. local time on Friday, live-streaming his barbarous crimes in ghastly detail. Seven more people were gunned down at a mosque on the other side of the city in the suburban Linwood neighborhood. One more died in hospital, where another 48 wounded are still receiving care, two in a critical condition. Children are among them.

Shackled and wearing a white smock, Brenton Harrison Tarrant, 28, appeared in court Saturday morning charged with murder. A native of Grafton, a pretty town of 17,000 some miles northeast of Sydney, he was seen to make a white supremacist hand gesture to assembled media. Assault rifles used in the massacre were daubed with the names of notorious killers of immigrants. One other 18-year-old has been charged with hate-speech though any connection to the murders is unclear.

Footage emerged Saturday of the gunman’s daring capture. A police car rammed into his white SUV after it sped away from Linwood, pushing the vehicle up and onto the curb, which allowed officers to drag him onto the pavement at gunpoint. Two improvised explosive devices had been found in the car and disabled.

Emergency services struggled to deal with the sheer number of victims. All appointments were canceled at Christchurch Hospital, where every available resource was turned over to surgery for the wounded. Family and friends hung around waiting for news of their loved ones.

“We came here as we’re wondering who’s a casualty and who’s dead,” Mohammed Ashif, who narrowly escaped the Linwood mosque during the attack, tells TIME.

Read more: What We Know About the Terror Attack in New Zealand Mosques

New Zealand is not at home with such bloodshed. The U.S. has racked up 56 mass shootings so far this year. By contrast, New Zealand is ranked the world’s second safest nation. The country’s previous deadliest shooting took place 29 years ago in the small town of Aramoana, where lone gunman David Gray murdered 13 people following a quarrel with a neighbor.

Since then, Christchurch’s 400,000 residents have feared the elements more than people; an earthquake in 2011 killed 185 and toppled many downtown buildings in what has been lovingly dubbed the “Garden City.” The biggest story until the massacre was an outbreak of measles that had affected 30 people, receiving around-the-clock coverage.

“Even if you ask someone about the earthquake today they will start crying, so this tragedy will stay in the heart of everyone,” says Raj Sandhu, 25, who moved to New Zealand from India three years ago, and came to the Al Noor mosque to pay his respects. “People are very scared and will be for a long time.”

Fear lies at the heart of all terrorism. In a 74-page hate-filled manifesto published a few days before the massacre, purportedly written by Tarrant, he said he wanted demonstrate that “nowhere in the world is safe.”

Describing himself as an “ethnonationalist and fascist,” he said he only arrived in New Zealand three months ago whilst he “planned and trained,” though was persuaded that it “was as target rich of an environment as anywhere in the world.”

That was demonstrated in high definition. The gunman donned a helmet video camera and broadcast live footage of his rampage on Facebook akin to the carnage of shoot-em-up video games. He spent more than two minutes inside the Al Noor mosque spraying terrified worshippers with bullets, coldly executing some people he’d already mowed down, before calmly reloading and even swapping rifles.

The footage shows him returning to the mosque, shooting a woman outside, and getting back in his car. The song “Fire” by English rock band “The Crazy World of Arthur Brown” blasts from the stereo, the singer yelling, “I am the god of hellfire!” as the gunman races from the scene.

Facebook and other social media that carried the video struggled to purge it from their networks, earning rebukes from the public and industry experts for not acting swiftly enough.

New Zealand Prime Minister Jacinda Ardern rounded on purveyors of hate during a news conference Friday. Immigrants, she said, ashen-faced, “have chosen to make New Zealand their home, and it is their home. They are us.”

Revelations that Tarrant had a standard gun license from 2017 despite a history of posting of hate-speech online prompted Ardern to say the nation’s gun laws “will change.”

New Zealand has a proud record of tolerance and integration, and under Ardern has boosted its annual refugee quota from 1,000 to 1,500 beginning next year. She has called it “the right thing to do.”

But not all agree. Isolated as New Zealand and neighboring Australia may be in the South Pacific, Islamophobia and hate-speech are spreading here, too. There is growing mainstream acceptance of the “Islamization” conspiracy, says Lydia Khalil, a terrorism expert at Australian think-tank the Lowy Institute.

In Australia, Senator Fraser Anning attracted widespread condemnation for tweeting, just hours after the massacre, that Muslim immigration was ultimately to blame. “The refugee issue and multiculturalism have become politicized and securitized in ways we haven’t seen before,” says Khalil.

People pay their respects for victims of the March 15 mosque attacks, in Christchurch on March 16, 2019.
Virginia Woods-Jack for TIME

Tarrant’s manifesto, which decries a “white genocide,” had clear echoes of Norwegian mass murderer Anders Breivik, who killed 77 people including schoolchildren attending a summer camp in 2011. Indeed, the writer claims to have had “brief contact” with Breivik, who he says gave his “blessing” to the Christchurch attack.

Whatever contact existed between the extremists, more than anything the mosque murders illustrate how technology has erased borders, and demonization of “the other” have been normalized in political discourse. The manifesto also claimed U.S. President Donald Trump and American alt-right commentators as inspiration.

Clarke Jones, a terrorism expert at Australia National University, says it was “inevitable” that this sort of attack was to take place. Such violence, he says, is “being nearly endorsed by political rhetoric around banning immigration of Muslims and criminalizing refugees.”

Those views were apparent even among the onlookers gathered at Al Noor Mosque. “I thought it would be the other way around, the Muslims attacking, that’s what everyone was waiting for,” says Paul Hale, 56, who runs a landscaping business in Christchurch. “It’s pretty bad that all those people got shot, but what if they had done it to us first?”

Despite New Zealand’s culture of ethnic harmony, there was also a sense that things were slipping. Stories about minorities in the mainstream media immediately attract hate-filled comments online. The live-streamed massacre received a flurry of “likes” and positive comments from New Zealanders on the extremist website it was originally posted on. Christchurch itself had a reputation for neo-Nazi skinheads in the 70s and 80s, though thought it had left that ugly history behind. There’s a fear that any reprisal attack could ignite the tinderbox.

“Right wing and jihadist extremists certainly feed off each other,” adds Khalil.

Still, in Christchurch on Saturday, local people refused to be warped by hate, bunkering down in their multicultural identity. With both the city’s mosques shrouded in police tape, churches opened their doors to Muslims wanting to pray. TIME spoke with Christians, Hindus, Sikhs, and Muslims all desperate not to let this tragedy redefine who they are. Amid a growing mound of flower tributes, someone had left a sign that read: “This is not NZ.”

“We never had any trouble here, it was completely unexpected,” says Radhika Kumar, 35, who drove from two hours away to pay her respects. “People are scared. Nobody ever thought something like this could happen in New Zealand.”

—With reporting from Elizabeth Thomson, Harry Poland and Connor Stirling/Christchurch and Sharon Verghis/Sydney 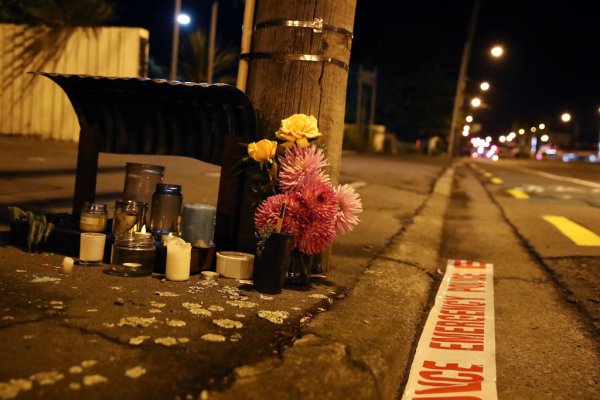 People Are Leaving Floral Tributes at Mosques Around the World After the New Zealand Attack
Next Up: Editor's Pick