In the aftermath of the Friday massacre at two mosques in Christchurch, New Zealand, a clear profile of the gunman is still being put together — but the man charged with murder appears to have posted a manifesto online before the shooting, writing: “For once, the person that will be called a fascist, is an actual fascist.”

The link between fascism and religiously and racially-motivated violence is one of the constants of the 100-year existence of fascism, say experts on its history. At the same time, the suspect’s apparent declaration highlights a recent and troubling change in the idea’s place in the world.

Almost exactly a century ago, on March 23, 1919, Italian dictator Benito Mussolini started a group called the Fasci Italiani di Combattimento, which led to the founding of the original National Fascist Party in 1921. He became Prime Minister a year later, and by 1925, he had ushered in the world’s first fascist dictatorship. The world is greatly changed since then, but the approach of violently attacking people perceived to be enemies remains a thread throughout the history of the idea on which Mussolini seized.

“In its essence, fascism is violence against people who you target as enemies,” says Ruth Ben-Ghiat, an expert on fascism and Professor of Italian and History at New York University. “You don’t discuss with your enemies, you just use violence against them, and this is how fascism rose to power in Italy.”

Specifically, Ben-Ghiat says, fascist governments and groups target people who threaten their power. From the beginning, that idea has been tied to threats to white supremacy; Mussolini himself was preoccupied with the idea that white people in Italy were dying out and being replaced by the minority groups who were the targets of his hatred.

“One core of fascism that hasn’t changed is this creation of a sense of emergency around whiteness,” she says. “If we don’t understand that racism was embedded in fascism from the start, we are getting an incomplete picture.”

Mussolini attracted followers, mostly veterans of World War I and businessmen, by encouraging the systematic assault and killing of socialists, who were viewed as disloyal for having opposed the war and whom factory-owners saw as a threat to their power over labor. Mussolini’s regime also targeted people in Italy’s African colonies in the 1930s and Slavs during border conflicts that ensued as Italy tried to expand its territory.

While the suspected shooter seems to have been motivated by anti-Muslim, anti-immigrant sentiment, historian Robert O. Paxton, author of The Anatomy of Fascism, says Mussolini was in some ways gripped by an opposing fixation, as he was more preoccupied with who was moving away than who was coming to Italy.

“They did not have an immigration program, they had an emigration problem, which is totally different,” he says. “Mussolini tried to prevent [Italians] from leaving because it was humiliating that Italy couldn’t employ its own.”

Paxton says that someone declaring himself to be an anti-Muslim, anti-Immigrant fascist is more an ideological descendant of the Nazi Party than of the original Italian Fascist Party, as Hitler’s followers trumpeted the idea of guarding against feared outsiders who, in being cast as threats, ended up targets.

“Nazism is a kind of fascism and that’s also how it began, with Hitler wanting to adapt what Mussolini had created 100 years ago,” Ben-Ghiat says. The Nazis wouldn’t have called themselves fascists, though, because “Hitler didn’t want to be seen as a disciple of Mussolini and thought of the Italians as second to Germans,” Paxton says.

Even extremists today are often reluctant to self-label as fascists, he notes, but “the Italian fascists who invented the term used it with pride.” Particularly vocal fascists known as the squadrists demonstrated this pride by donning black shirts and marching in parades or beating up socialists.

It was after the term became associated with loss in World War II and the atrocities of the Holocaust that it became “completely tainted” even among those who still held its violent beliefs, he says. “[Modern] far-right parties generally avoid the term like the plague,” and tend to use coded replacement words. That’s also because they can get in trouble with the law. After World War Il, Germany and Italy passed laws aimed at banning propaganda promoting the Fascist and Nazi Parties. While such measures were supposed to “make sure these movements didn’t come back,” as Ben-Ghiat puts it, efforts to police them have varied, and such substitute language has enabled their ideas to come back in different forms.

Recently, however, it appears that even the desire not to be publicly associated with Mussolini and Hitler is fading in some corners of the world. The apparent words of the New Zealand suspect display that shift in stark and troubling relief.

“Fascism is taboo right after World War II but, since the 1990s and especially after 2000, when strongmen come to rule, it’s been rehabbed for a new generation,” Ben-Ghiat says.

The more time that has passed since World War II, the more Paxton thinks the term has been used more to refer to “generic tough guys.” Self-labeling can be more abstract, declaring how one feels and one’s distance from societal norms, rather than declaring an affiliation to a particular political party.

“[‘Fascist’] is rarely used for one’s self because it’s a very negative word,” he adds. “Self-labeling doesn’t really mean much of anything — except as a statement of extreme alienation.” 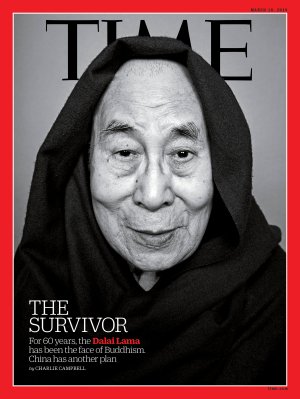 Why the Dalai Lama’s Message Still Resonates Today
Next Up: Editor's Pick