In the wake of a terror attack on two Christchurch mosques that took the lives of 49 people and injured at least 20, people have been expressing their sympathies for the victims by leaving flowers at local mosques in New Zealand and around the world.

A post by New Zealand’s public broadcasting station showed flowers left outside a mosque in Auckland.

Soon after, images of similar memorials at other mosques around the country began to appear on Twitter.

Many of the people leaving flowers have not been Muslim themselves. Rather, the floral tributes have become a way for people to express unity and solidarity in the face of Islamophobic and anti-immigration sentiment.

In London, the New Zealand War Memorial in Hyde Park Corner became a center of mourning. Several people gathered for a vigil Friday evening and to lay flowers to express their condolences.

Flowers and messages of kindness have been showing up in other parts of the world as well. One mosque in Vancouver shared images of their front gates on Twitter.

Many more around Europe and in the U.S. have begun to do the same.

Prime Minister’s Jacinda Ardern has described as a “terrorist attack” and “one of New Zealand’s darkest days.”

The attack was carried out by an Australian white-nationalist who detailed his motivations in a 74-page manifesto. The man, who is now in custody, live-streamed the horrific event on Facebook. While the original post has been deleted, social media sites have been struggling to remove footage from the gruesome video online. 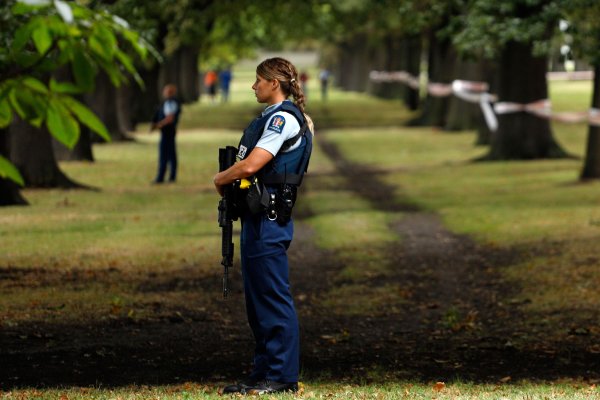 How the New Zealand Mosque Shootings Are Putting Scrutiny on the Country's Gun Laws
Next Up: Editor's Pick