Britain Votes To Delay Brexit After Chaotic Week In Parliament. Here’s What That Means

As earthquakes go in recent British politics, this one was the largest. Across three successive evenings, lawmakers handed down three scathing defeats to Prime Minister Theresa May. The scale of the early damage was unquantifiable, there was no immediate plan for how to rebuild, and nobody knew how dangerous the aftershocks would be.

But two things were clear. After two years of tortuous negotiations with the E.U., the U.K. was back to square one. And, in a turning point, lawmakers had wrestled control over the Brexit process out of the hands of May’s government.

The events played out in three stages. First, on Tuesday, lawmakers rejected the deal May had spent two years negotiating with the European Union. By doing so, they set Britain on course to crash out of the E.U. on its scheduled exit date, March 29, without a deal.

But then, on Wednesday, lawmakers voted to rule out such a “no deal” Brexit. Confusingly, that vote was not binding, and did not change the reality that Britain is legally bound to leave on March 29 if no deal has by then been agreed by Parliament.

So, to undo that paradox, lawmakers instructed May on Thursday to request the E.U. to postpone Britain’s exit date. The order, by a margin of 412 votes to 202, was an embarrassment for May, who had been steadfast in her rhetoric until Wednesday that Britain would leave on March 29. And it meant that E.U. member state governments now hold the power to allow the U.K. to postpone its departure, or force a no-deal Brexit.

With just 15 days to go before Brexit, here’s what to know about what could happen next.

Will Brexit happen on March 29?

But if just one E.U. member state vetoes May’s request to postpone Brexit, then Britain legally must leave on March 29. In the case a country chooses to veto, there are three options. The simplest is that Britain leaves on March 29 without a deal.

But there are yet more possibilities. Staring down a no-deal Brexit, U.K. lawmakers could either vote to accept May’s deal (or a slightly modified version of it) and leave the E.U. with that deal; or they could hold a vote to revoke Article 50 (the legal instrument allowing Britain to leave the E.U.) and remain a member state — in other words, lawmakers could cancel Brexit.

Still more complexity arises from the fact that the E.U. might choose to grant an extension, but only a long one, in the order of a year or more. Lawmakers in the U.K. have made clear that a short extension, of months, is more palatable. Faced with a choice between a long extension and a no-deal Brexit, there is no predicting what lawmakers or the government might choose to do.

How is Theresa May still Prime Minister?

Despite leading a divided country, a divided party, and even a divided cabinet, somehow May has remained prime minister since 2016. How has she got this far?

Part of the answer lies in the fact that nobody wants the job of finishing off the Brexit negotiations. Many members of her party covet the role of Prime Minister, but would prefer for May to see out the negotiations and then step down. May calmed the most strident voices calling for her resignation when, in December, she pledged to step down before the next election, which is currently scheduled for 2022.

But it’s unclear whether she will be able to stay in her role amid the current chaos. She is safe from an internal party challenge, having narrowly won one in December, but she could still be ousted as Prime Minister either by her cabinet resigning en masse, making her position untenable, or opposition parties calling and passing a vote of no confidence in the government.

Yes. In December, the European court of justice ruled that the U.K. could unilaterally revoke Article 50 before March 29, thus cancelling the Brexit process, allowing Britain to remain a member of the European Union on its current terms.

Could there still be a second Brexit referendum?

Maybe. Lawmakers rejected a motion on Thursday to hold a second referendum by 334 votes to 85. Nevertheless, the opposition Labour Party indicated it could change its mind and instruct its 229 lawmakers to vote for one (it told them to abstain on Thursday). The People’s Vote campaign, a cross-party group calling for a second referendum, also told its members to abstain, suggesting that Thursday was not the right time — but that another vote would happen in due course.

“I reiterate our support for a public vote, not as political point scoring, but as a realistic option to break the deadlock,” said the Labour Party leader Jeremy Corbyn after the result of Thursday’s votes came through. 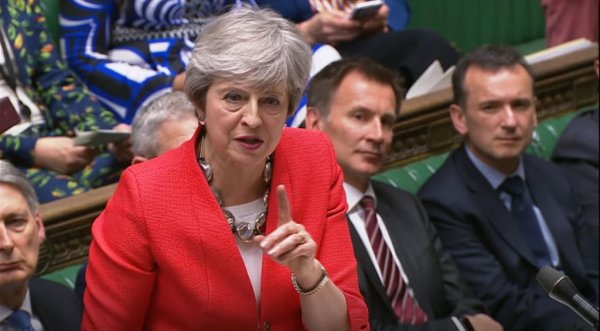 U.K. Parliament Just Turned Down Another Brexit Deal
Next Up: Editor's Pick