For more than 30 parents, federal charges related to their role in a sweeping college admissions scandal brought the consequences of their actions into sharp focus this week. But the fate of many students who were allegedly admitted under false pretenses — none of whom have been criminally charged — remains unclear, though at least six current applicants are now being denied admission.

U.S. Attorney for Massachusetts Andrew Lelling said during a press conference Tuesday that it’s partially up to individual schools to determine if any consequences against students are necessary.

“We leave that to the schools. That’s not my bailiwick. As to charges against them, we’re still considering that. It’s not an accident that there are no students charged in these charging documents,” Lelling said. “The parents, the other defendants, are clearly the prime movers of this fraud. It remains to be seen whether we charge any students.”

The indictment detailed an extensive scheme by wealthy parents to get their children into elite colleges — including Georgetown, Yale, Stanford and the University of Southern California (USC) — by bribing athletic coaches and facilitating cheating on standardized tests. According to the complaint, many students “were unaware that their parents had arranged for this cheating.”

Jon Reider, a former Stanford admissions officer and a recently retired college counselor at a San Francisco high school, says he doesn’t think students will face school disciplinary action unless there is proof they were aware of the fraud. Whether they face consequences will depend on how much the students knew and what kind of message the schools want to send, he says.

“It would sort of depend on how seriously angry the school, as an institution, is,” Reider says. “They may want to make an example of some of these kids. And they could say, ‘We admitted you under these representations — that you were a great rower or something, and you must have known. You filled out the application. You signed it. Oh, your mother filled out the application? So your signature is false?'”

A spokesperson for USC said six applicants involved in the current admissions cycle who are connected to the scheme will be denied admission.

“We are going to conduct a case-by-case review for current students and graduates that may be connected to the scheme alleged by the government,” Eddie North-Hager, a spokesperson for USC, said in a statement. “We will make informed, appropriate decisions once those reviews have been completed. Some of these individuals may have been minors at the time of their application process.”

Other schools have also said they could take action against students.

“Applicants to Stanford sign a statement verifying that the information they are providing is accurate,” Stanford said in response to the scandal. “If it is found to be inaccurate, they can be dis-enrolled from the university or have their admission cancelled, as has regretfully happened in the past.”

“Although I do not comment on specific disciplinary actions taken with respect to an individual student, our longstanding policy is to rescind the admission of students who falsified their Yale College applications,” Yale President Peter Salovey said in a letter to the Yale community Friday.

The University of California, Los Angeles said it could now take disciplinary action “up to and including cancellation of admission” if it “discovers that any prospective, admitted or enrolled student has misrepresented any aspect of his/her application, or that information about the applicant has been withheld.”

The students involved could face consequences outside academia, too. Olivia Jade Giannulli — a social media influencer and USC freshman whose mother, actress Lori Loughlin, was indicted in the scandal — lost her partnership with beauty brand Sephora on Thursday.

In the past, students found to have cheated on standardized tests or fabricated portions of their college application have faced expulsion and criminal or civil charges. But the fallout from this week’s indictment is complicated by the fact that many students were allegedly unaware of the scheme taking place on their behalf.

“It’s deniability. If you don’t know what someone else did, even though you benefited from it — it might be that the benefit gets taken away, but you certainly can’t impose disciplinary or civil or criminal action,” says Gerry Leone, general counsel to the University of Massachusetts system, which was not implicated in the scandal. As a former prosecutor in 2010, Leone brought charges against a Harvard student accused of fabricating his way into the university.

“There may be actions taken which put the students back in the place where they would’ve been prior to the fraud — which is if they can legitimately compete and get accepted, then they can compete,” Leone says. “And if they couldn’t have, then they don’t get the ill-gotten gain.”

Court documents suggest that at least one student knowingly cheated on the SAT in 2015 and participated in fabricating her athletic career. Elizabeth and Manuel Henriquez were both accused of bribing Georgetown tennis coach Gordon Ernst to designate their older daughter as a tennis recruit and facilitating cheating on standardized tests, allegedly spending at least $400,000 to get her into Georgetown. Their daughter, Isabelle Henriquez, who is not identified by name in the complaint, was admitted to Georgetown in spring 2016.

According to the indictment, a proctor “sat side-by-side with the daughter during the exam and provided her with answers to the exam questions, and after the exam, he ‘gloated’ with Elizabeth Henriquez and her daughter about the fact that they had cheated and gotten away with it.” The daughter is also accused of sending an email to Ernst with “fabricated” information about her tennis career and including false athletic information in her essay and application, according to the indictment.

“Georgetown refrains from commenting on individual students in accordance with the Family Educational Rights and Privacy Act (FERPA),” a spokesperson for the university said in a statement. “We are reviewing the details of the indictment and will be taking appropriate action.”

Ernst was placed on leave in December 2017 “following an internal investigation that found he had violated University rules concerning admissions,” the university said.

Leone says university responses are likely to vary based on their individual policies and historical precedent. 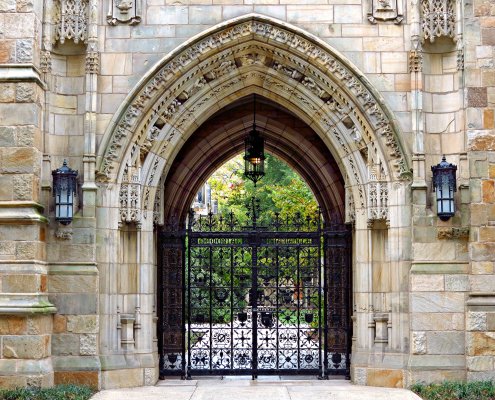 There’s a Larger Lie Beyond the College Admissions Bribery Case
Next Up: Editor's Pick