How the New Avengers: Endgame Trailer Hints At a Major Time Jump

Looks like Marvel fans may be in for a time jump when Avengers: Endgame, the sequel to Avengers: Infinity War and the conclusion of a decade of Marvel Cinematic Universe movies that began with Iron Man in 2008, hits theaters on April 26.

In a new trailer for Avengers: Endgame, the original Avengers — including Iron Man (Tony Stark, played by Robert Downey Jr.), Captain America (Steve Rogers, played by Chris Evans) and Thor (Chris Hemsworth) — mull over their time as superheroes as they plan to make one last-ditch effort to save those who disintegrated when Thanos snapped his fingers to eliminate half of all life in the universe.

But how long after that fatal snap the events of Endgame will take place is still up for debate. In the new trailer, we see Black Widow (Natasha Romanoff, played by Scarlett Johansson) sporting both a longer blonde cut as well as a never-before-seen red ombre ‘do, two styles that differ drastically from the short blonde lob she had in Infinity War. And as Vanity Fair writer Joanna Robinson pointed out on Twitter, that dramatic of a transformation likely indicates a significant time jump.

“They’ve stopped trying to conceal the big time jump (clock Natasha’s hair) which is intriguing,” Robinson wrote, adding a photo of Black Widow’s new style with the caption, “We’re in the endgame now…or…like…eventually…in a few years I guess.”

We also get the added bonus of seeing Thor meet Captain Marvel (Carol Danvers, played by Brie Larson) for the first time. 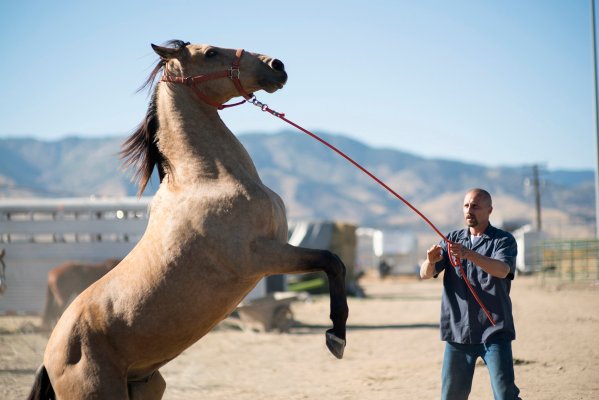 A Wild Horse and an Inmate Tame Each Other in The Mustang
Next Up: Editor's Pick