Elizabeth Holmes Got Where She Was Through Privilege. A New Documentary About Her Doesn’t See That

Four years after the Wall Street Journal reported that Theranos founder Elizabeth Holmes falsified the results of her supposedly revolutionary blood-test machine, she continues to draw attention. In the past several months, Holmes has been the subject of John Carreyrou’s best-selling book Bad Blood, a podcast called The Dropout and now The Inventor, an HBO film by prolific documentarian Alex Gibney.

In two hours, Gibney does an efficient job of recapping the rise of Theranos to a $10 billion valuation and its epic fall. In the most compelling segments, he lays out how famed inventors, including Thomas Edison, faked it until they made it–stalling for time with the public until they reached a breakthrough. Holmes, Gibney argues, just took that entrepreneurial spirit too far.

But Gibney never quite connects the dots between Holmes and the factors that facilitated her rise. The fact is, Holmes would never have been able to pull off her scam if she’d been a random Stanford dropout. She leveraged her rarefied background to sustain the lie. Though the documentary suggests that Holmes essentially seduced her famous male board members, who included Henry Kissinger and George Shultz, that seems suspect: any woman will identify Holmes as a CEO desperate for the Valley to forget her gender. (She wore black turtlenecks, lowered her voice several octaves and publicly declared she did not date–though this, too, was a lie.) The men she hustled were probably seduced by her pedigree; in the film, Theranos chairman Don Lucas says that he knew Holmes, then a 22-year-old startup founder, “came by it naturally” because her great-grandfather was an entrepreneur and her great-uncle a famous doctor–as if her bloodline, not her work, was what mattered.

Like so many tech upstarts, Holmes projected unwavering confidence, flying exclusively on private jets even while her empire crumbled. She’s a captivating antihero, maybe because it’s unusual for women to operate with that level of entitlement. But Holmes’ story works best as the ultimate example of how the privileged believe they can get away with anything–whether that’s in Washington, Hollywood or Silicon Valley. 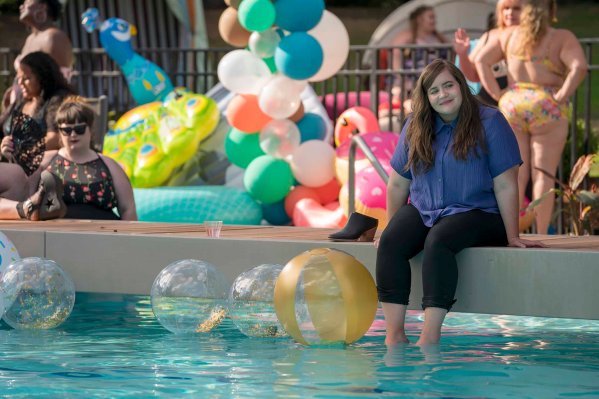 Shrill Wants to Revolutionize TV's Portrayal of Fat Women. But It Doesn't Go Far Enough
Next Up: Editor's Pick