When Laila Lalami’s 2014 novel The Moor’s Account was short-listed for a Pulitzer Prize, jurors called its tale of a 16th century Spanish expedition to Florida “compassionately imagined out of the gaps and silences of history.” Five years on, Lalami turns that same compassion to the silences of the present. In her timely fourth novel, The Other Americans, she follows an investigation into the death of an elderly Moroccan immigrant in an apparent hit-and-run and its impact on a California desert town.

Through nine narrators–from Coleman, a black detective, to Efraín, an undocumented immigrant who witnesses the crash–Lalami offers a compelling portrait of race and immigration in America. The driving force of the narrative is a classic whodunit, but more interesting questions lie beneath: What does it mean to feel alienated from your family or country? Who gets to be heard, and who is silenced?

Lalami, who was born and raised in Morocco, knows her subject intimately. In an essay on becoming a U.S. citizen after marrying an American, written in the wake of President Trump’s travel ban in 2017, she wrote: “America embraces me with one arm, but it pushes me away with the other.”

Politicians talk about dialogue in a time of polarization, but it’s rare to see what form that might actually take. Lalami offers us a model, showing how the victim’s daughter Nora, who grew up in a Muslim family in post-9/11 America, and her childhood friend Jeremy, an Iraq War veteran, find empathy for each other. For the first time, Jeremy sees himself through the eyes of someone who cannot think of him as a hero. “Long before I’d gone to war, war had come to her–a brick thrown in her father’s window, a slur written on her locker,” he thinks.

The alternating narrators occasionally overwhelm Lalami’s storytelling, since the voices do not always vary enough to capture a shift in perspective. But Lalami is remarkably skilled at rendering the interior lives of her cast. From Jeremy’s guilt over what he saw in Iraq to Efraín’s sense of being haunted by the old man’s ghost, the characters’ feelings of responsibility trouble them, and move us. “There wasn’t anything I could do. All I saw was a man falling to the ground,” Efraín says. But in America today, bearing witness is never quite so simple. 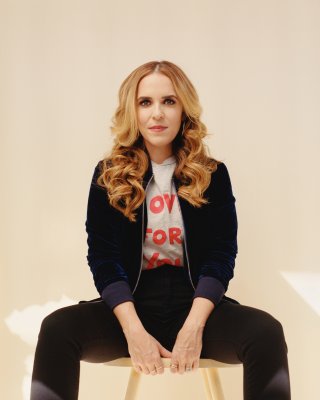 Not Everyone Is Buying Rachel Hollis' Self-Help Advice
Next Up: Editor's Pick