Maren Morris Is the Future of Country Music

It’s a cold night in New York City the evening before her album is set to drop, and country star Maren Morris is performing a stripped-down set of new songs to a crowd of fans, mostly young women, at an intimate performance space at YouTube’s office. After she begins one–an acoustic number for which she slings on a guitar over her neon crop top–she stops halfway through the first line, shaking her head.

“You’d think I’d know the lyrics,” she jokes. “I wrote them!” She starts up again, and this time she nails it. Later, she performs her lead single–the anthemic “Girl,” after which the album is titled–a second time too, thanks to sound issues. “My voice is on the fritz!” she says.

Technical troubles aside, Morris knows how to deliver. After striking gold with her debut country single “My Church” in 2016, she had a huge global hit with last year’s Grammy-nominated pop-EDM smash “The Middle,” a collaboration with the DJs Zedd and Grey, which helped make her a mainstream star. “We do a lot of fencing-in to female artists to try to have them fit what we think the mold looks like,” she says in an interview. “With ‘The Middle,’ it was actually bringing a whole world of people in saying, ‘Who’s this Maren Morris chick on this massive song?'”

For her sophomore album, Morris wrote with pop and country hitmakers. “You can be a whole spectrum of things,” she says
Columbia Nashville

On her new album, Girl, out now, Morris answers that question by defying genre once again, her twang rising over layers of glossy pop, R&B and soul. In that versatility, Morris represents a new generation of women in country who are working to transcend the boundaries of their Nashville roots.

The contemporary country-music establishment is a notoriously difficult space for women to succeed. Even Grammy-winning artists like Kacey Musgraves and Miranda Lambert struggle to get airplay. Charts are overwhelmingly stacked with men, and Spotify showcases just a scattered few female voices on its official country playlist. It wasn’t always this way: Dolly Parton, the Dixie Chicks, LeAnn Rimes and more artists once reigned, while crossover acts like Shania Twain achieved record-breaking successes. But in the past decade, women have ceded ground to a battalion of male superstars, making Morris’ success all the more impressive.

Born and raised in Texas, Morris made her way to Nashville as a songwriter six years ago. Her debut album, Hero, released in 2016, earned a Grammy nomination and helped her win New Artist of the Year at the CMA Awards. But in its wake, she made choices that broadened her appeal: “Dear Hate,” an emotional duet with Vince Gill following the 2017 Las Vegas shooting, as well as a collaboration with One Direction’s Niall Horan on his folksy solo album. She wanted to expand her reach, bringing her “flavor of country” past the bounds of the region and its built-in fan base–and, by extension, its gender imbalance. “Maren has a willingness and enthusiasm that allow her to draw outside the lines,” says Zedd, her collaborator on “The Middle.” “[She]’s clearing a wide path for women.” For her part, Morris sees a Nashville that’s starting to change, one that’s receptive to the diversity of opinions and sounds she represents. “You don’t have to be just one color,” she says. “You can be a whole spectrum of things.”

Girl reflects that ambition. There are shades of earnest soul in her unity-themed duet with Americana star Brandi Carlile, as well as stomping, boozy country on a collaboration with Brothers Osborne–yet her song “RSVP” is an unabashedly steamy R&B jam. She’s said that the title of the album is a jab at the boys’ club that makes up the charts. But Morris doesn’t want to leave country behind–she just wants everyone else to join a more inclusive party. “My definition of a country song is: It’s about real life,” she says. “It’s telling a story.” 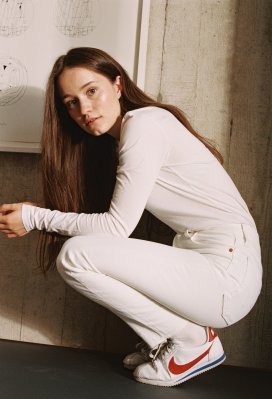 Sigrid Brings a Fresh New Voice to Pop With 'Sucker Punch'
Next Up: Editor's Pick