Zion Williamson #1 of the Duke Blue Devils reacts after a dunk against the North Carolina Tar Heels during their game in the semifinals of the 2019 Men's ACC Basketball Tournament at Spectrum Center in Charlotte, North Carolina on March 15, 2019.
Streeter Lecka—Getty Images
By Megan McCluskey

The NCAA tournament, March Madness, the Big Dance, whatever you want to call it, it’s the most wonderful time of the year for college basketball fans.

Selection Sunday has come and gone and the field of 64 Division I men’s basketball teams that will compete for the 2019 National Championship is set— with the exception of the four teams that will be determined by play-in games on Tuesday and Wednesday, of course. This year’s Final Four will take place in Minneapolis, Minn. from April 6 – 8, with the national championship title game set for Monday, April 8.

In the mix this March are three No. 1 seeds from the Atlantic Coast Conference — Duke, Virginia and North Carolina — as well as the fourth and final one-seed, Gonzaga, and a slew of other programs gunning for an upset against the four top-ranked teams.

Brackets will almost certainly be busted and at least one Cinderella story will hopefully be told as the tournament plays out, but in the meantime let’s take a look ahead at 10 of the most exciting potential match-ups that could happen in the 2019 NCAA tournament.

The Volunteers and Boilermakers may not be defensive powerhouses — their defenses are ranked 34th and 32nd in the nation, respectively, according to KenPom — but with the No. 3 and No. 5 offenses in play, this could be a high-scoring second weekend match-up to look out for.

Wabissa Bede #3 of the Virginia Tech Hokies runs past Jordan Goldwire #14 and Marques Bolden #20 of the Duke Blue Devils at Cassell Coliseum in Blacksburg, Virginia on February 26, 2019.
Lauren Rakes—Getty Images

The Hokies pulled off a decisive upset when they came up against the Blue Devils during regular-season conference play in February. Of course, the caveat to that win is that Duke’s star freshman, Zion Williamson, sat the game out with a sprained right knee. Williamson is back and slamming down more dunks than ever, but that doesn’t mean Virginia Tech won’t somehow find an answer to the Blue Devils’ 6-foot-7-inch, 285-pound forward.

When these two storied basketball programs last met in March, North Carolina’s Luke Maye hit the game-winning shot with just 0.3 seconds left to send the Tar Heels to the Final Four on the way to their 2017 National Championship. Not to mention that the 2018 CBS Sports Classic game that these two played in December came down to the final minutes — Kentucky pulled off the win. An Elite Eight match-up between the one and two-seeds in the Midwest would almost certainly be another one for the books.

Straight off a come-from-behind victory against their in-state rival Michigan in the Big Ten Tournament Championship, Michigan State is entering the NCAA tournament on a hot streak. The only bad news is that the Spartans’ Kyle Ahrens suffered a gruesome ankle injury in Sunday’s game that could keep him on the bench for the remainder of the season. As the No. 1 overall seed, the Blue Devils are going to be a force to be reckoned with for any team, let alone one that isn’t at full strength.

Phil Booth #5 of the Villanova Wildcats celebrates the 74-72 win over the Seton Hall Pirates during the Big East Championship Game at Madison Square Garden in New York City on March 16, 2019.
Elsa—Getty Images

After battling through a late-season slump to win the Big East Tournament Championship, Villanova could easily turn out to be one of the most dangerous teams ranked below the top three seed lines in this year’s tournament. On the other hand, after losing to the No. 16-seeded UMBC Retrievers in the first-round of last year — a historic March Madness upset — the Cavaliers are back at No. 1 with something to prove.

Lagerald Vick #24 of the Kansas Jayhawks shoots the ball against the Kentucky Wildcats at Rupp Arena in Lexington, Kentucky on January 26, 2019.
Andy Lyons—Getty Images

If one-seed North Carolina and current-Tar-Heel-former-Jayhawk coach Roy Williams fall to Kansas in a Sweet Sixteen game that is set to take place at Kansas City’s Sprint Center — an arena that would essentially give Kansas a home-court advantage — a Kentucky-Kansas match-up in the Elite Eight could very well be in the cards. The Wildcats topped the Jayhawks by just eight points when the two teams faced off in January, so with a spot in the Final Four at stake, this rematch would likely be a showstopper.

Rui Hachimura #21 of the Gonzaga Bulldogs brings the ball up the court against the Pepperdine Waves during a semifinal game of the West Coast Conference basketball tournament at the Orleans Arena in Las Vegas, Nevada on March 11, 2019.
Ethan Miller—Getty Images

As the losers of the 2017 and 2018 National Championships, Gonzaga and Michigan are both itching to make it back to the championship title game for a shot at redemption. But to get there, the two may first have to face each other in an Elite Eight game that would pit the nation’s No. 1-ranked offense (Bulldogs) against the No. 2-ranked defense (Wolverines).

Kenny Williams #24 of the North Carolina Tar Heels takes a three-point shot against the Virginia Cavaliers during their game at the Dean Smith Center in Chapel Hill, North Carolina on February 11, 2019 .
Grant Halverson/Getty Images

The Cavaliers came out on top the first and only time that Virginia and North Carolina met during the regular season, but it’s always a showdown when these two ACC powerhouses go head to head. The Cavaliers thrive at a slower pace while the Tar Heels like to race down the court at breakneck speed, so the outcome of this Final Four match-up would likely depend on who controls the tempo of the game

Ignas Brazdeikis #13 of the Michigan Wolverines dribbles the ball while being guarded by Aaron Henry #11 of the Michigan State Spartans in the second half during the championship game of the Big Ten Basketball Tournament at the United Center in Chicago, Illinois on March 17, 2019.
Jonathan Daniel—Getty Images

If both Michigan State and Michigan manage to knock out the No. 1 seeds in their regions (Duke and Gonzaga, respectively) — or another team does the job for them first — a Big Ten Tournament Championship rematch could prove to be one of the tournament’s most exciting games. Only this time, the Spartans and Wolverines would be competing for a chance to play in the 2019 National Championship.

No matter either team’s record or ranking, a Duke-UNC game is high stakes any time the two Tobacco Road teams meet. Over the course of college basketball history, the two schools — both of which are among the top five winningest programs of all-time — have won a combined 38 of the 65 ACC Tournament Championships, 50 regular season ACC championships and 11 National Championships. This year alone, North Carolina swept Duke to win a share of the ACC regular season championship before Duke returned the favor by edging Carolina out of the ACC Tournament with a 74-73 win in the semifinals.

All of this is to say that, for fans of either program, the idea of the Blue Devils and Tar Heels meeting in the NCAA tournament for the very first time with a national title on the line is nearly unfathomable. If these two do go head to head in the 2019 National Championship, the greatest rivalry in college basketball will skyrocket to a whole new level. 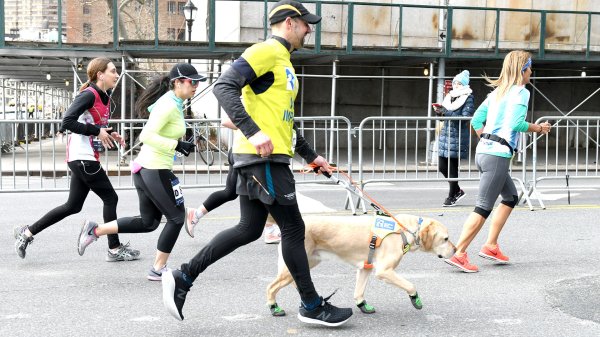 This Blind Runner is the First to Complete the NYC Half Marathon Guided Only by Dogs
Next Up: Editor's Pick