‘All This Potential Gone Forever.’ Colleagues Remember the Humanitarians Killed in the Ethiopian Airlines Crash

When an Ethiopian Airlines flight carrying 157 passengers crashed Sunday, killing all aboard, the world lost nearly two dozen “superheroes”—selfless humanitarians and peace-seekers whose work for the United Nations helped save thousands of lives across the globe, according to environmental leaders and friends of the victims.

At least 22 U.N. workers were killed when the doomed Nairobi, Kenya-bound flight went down minutes after taking off from Ethiopia’s capital, Addis Ababa, officials said. Some of them were headed to Nairobi to attend the fourth U.N. Environment Assembly, the top decision-making body on global environmental issues, which kicked off Monday with a somber moment of silence. Heads were bowed and flags were flown at half-staff, officials said, as the thousands gathered paid tribute to their fallen colleagues.

Among the dead was 38-year-old Victor Tsang, a kind and fierce fighter for women’s rights, who was about a month away from enjoying the birth of his second child, according to his colleagues and friends.

“He was the best of his generation and such a decent human being,” said Erik Solheim, the former executive director of the U.N. Environment Programme. “Victor made the world a better place. He spread sunshine wherever he went.”

Tsang, a Hong Kong native, championed gender equality and promoted sustainable energy as an ambassador for the U.N. Environment Programme, the agency said. “He was a very strong feminist,” Solheim told TIME, adding that Tsang may have been motivated to fight for the cause because of his close connection to his wife, who is eight months pregnant. The couple “did everything together” and deeply loved their 2-year-old son, colleagues said.

“He would play with his child like a child,” said Pushpam Kumar, the U.N. Environment Assembly’s chief environmental economist. “He had boundless energy.”

When he learned of his colleague’s death, Kumar said he had flashbacks of happier memories of Tsang bringing his son into his Nairobi office and expressing his excitement about his upcoming baby. But Kumar, 50, was also hit with waves of sadness. “Life is so fragile. We know that. But this was something else,” he said, adding that he had to ask himself, “Victor is no more?”

“He had a full life to go,” Kumar said. “All this potential gone forever.”

Solheim, Tsang’s former boss, said Tsang “could have achieved so much.” Solheim said Tsang was brave and determined to effect change even if it meant constantly barging into his office with new ideas. “A lot of people don’t dare to do that,” Solheim said with a laugh. “It may be strange, but the U.N. is a very authoritarian institution. But he was frank, coming with suggestions on how to do things other ways. That’s what I will remember about him.”

Tsang became “one of the strongest voices in the organization for the promotion of women,” Solheim said. He also took his activism outside of the office and spread awareness about the issue around the globe. “He had no enemies. His hard work, dedication—it would have taken him very far in life,” Solheim said. “It was a life cut short when it was starting to flourish.”

Sunday’s crash also claimed the life of Oliver Vick, a British native who worked for the U.N. Assistance Mission in Somalia (UNSOM) and helped set up elections in Afghanistan, according to the organization and his friends. “He was a very free spirit,” said Sheilagh Henry, a U.N. official based in New York and Vick’s good friend.

Vick was also a skilled worker who fought “tirelessly for peace in Somalia,” UNSOM said in a statement. He also “had political knowledge of every country he ever worked with” and was the person his colleagues could turn to for “information, for insight and for friendship and fun,” Henry said. More importantly to him, Vick was an “amazing father” to two young children—at least one of whom was born while Vick was on the job in Afghanistan, Henry said.

“The world just won’t be the same without him,” Henry said through tears.

Also killed were seven people who worked for the U.N. World Food Programme (WFP), which helps more than 90 million people in more than 80 countries each year. Its workers face perilous conditions every day they’re on the job, often rushing toward tsunamis and volcanoes and setting up camp in war zones and hostile territories as others flee, according to WFP Executive Director David Beasley. They delivered food and relief despite threats from terrorists, extremists and the worst of Mother Nature.

“They’re superheroes,” he added. “They laid their lives down for others every single day. We didn’t expect them to go down like this. This is heartbreaking.”

The seven WFP workers who were killed included Ekta Adhikari, 28, from Nepal, who was stationed in Addis Ababa. “She was the life of the office,” Beasley recalled, adding that she was also “inspiring and encouraging.” The team also lost Michael Ryan, a 39-year-old engineer from Ireland, who Beasley credits for saving thousands of people. Ryan joined the group as head of engineering in Addis Ababa in 2012. He leaves behind a wife and two children, including a 6-month-old baby.

The 157 victims in total came from 35 countries, including Kenya, Canada, Ethiopia, France, China, Italy, Britain and the U.S., officials said. It’s still unclear what caused the crash, which prompted about 40 nations—including the U.S. as recently as Wednesday—to ground all of its Boeing 737 Max 8 aircraft. It was the second fatal crash involving the model in just five months.

Environmental leaders and colleagues of the slain humanitarians pledged to forge ahead in their memory. At Monday’s assembly, Joyce Msuya, acting executive director of the U.N. Environment Programme, urged the more than 4,700 delegates at the event to remain “optimistic and bold” and to keep working toward the goal of reducing fossil fuel use and waste.

Beasley said continuing the victims’ work would be the best way to remember them. “Every single one of [them] would want us to not skip a beat. They would want us to go and do more on their behalf,” he said. “This tragedy, I believe, is letting the world know the sacrifices that humanitarians go through every day around the world. And I’m hoping that through this tragedy, people all over the world will be inspired to do even more.”

“The deaths of all these humanitarians on that plane will not be vain,” Beasley added. 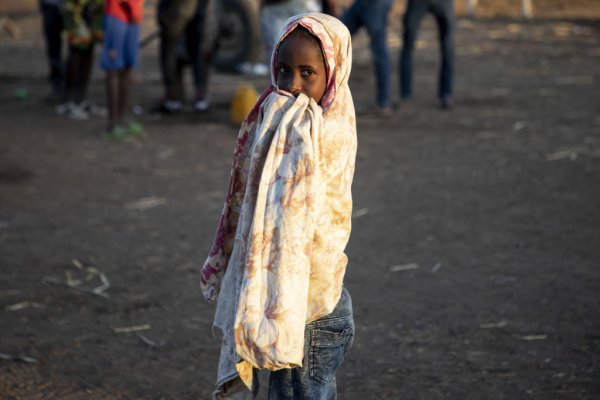 U.N. Presses for Access to Ethiopia's 'Dire' Tigray Region
Next Up: Editor's Pick