Mehman Huseynov, pictured before his Jan. 2017 trial, is leading a movement for press freedom in the former Soviet Republic
Aziz Karimov
By Joseph Hincks

Neither of the Huseynov brothers got to see their mother before she died last year. Journalist Emin Huseynov had been stripped of his Azeri citizenship and rendered stateless after he escaped the oil-rich Caucasus country of Azerbaijan for Switzerland in 2015. His younger brother Mehman was serving a two-year prison term for allegedly defaming a police officer he said had tortured him.

Denied the chance to visit his mother in hospital, Mehman was only permitted a few hours leave to attend her funeral. In a graveside statement the journalist angered authorities anew when he criticized President Ilham Aliyev and said he would continue exposing the high-level corruption that affects some 10 million Azeris. “I wanted to show them that even in the most difficult part of my life you can’t break my will,” Mehman, 29, told TIME after his release in early March.

The murder of Saudi Arabian journalist Jamal Khashoggi has drawn significant attention to how authoritarian regimes’ repress critical media. A case in point is what Reporters Without Borders (RSF) U.K. bureau director Rebecca Vincent calls a “perpetually worsening crackdown” in Azerbaijan. RSF says at least four journalists have been killed with impunity since 2005 in the former Soviet republic, which ranks 163 out of 180 countries on its 2018 press freedom index. The persecution of the Huseynov brothers, Vincent says, is characteristic of the “very personal” way Aliyev targets his critics.

On Dec. 26, a few months before Mehman’s scheduled release date, authorities bought new charges against him that his lawyer said could have extended his jail term up to seven years. In response, he went on hunger strike: he was “nil by mouth” for four days before accepting water and eventually liquid yoghurt. He broke his fast late January, when Azerbaijan’s prosecutor canceled the new charges in a rare concession to international pressure. Mehman had also inspired thousands of protesters to take the streets in what opposition figures called Azerbaijan’s largest demonstrations in more than a decade. (State police said 2,800 people attended the rally, while the opposition said there were 20,000.)

Emin Huseynov began his journalism career in 2001, two years before Ilham Aliyev took over as President, following on from his father Heydar, who had first ruled Azerbaijan as its Soviet boss, and then as the Republic’s president from 1994. In a cable released by Wikileaks, a former diplomat at the U.S. embassy in Azerbaijan compared father and son to members of The Godfather’s fictional Corleone family. In December, a British tribunal heard that in 2015, Ilham Aliyev’s daughters attempted to buy a $80 million London property that would have carried “a significant risk of money laundering.”

Persecution of dissident voices has long been a feature of the Aliyev regime. But historian Audrey L. Altstadt, who has written several books on Azerbaijan, says the repression worsened after 2010, when the ruling party gained absolute control of the legislature and passed laws that provided a pretext for “tax evasion” charges to be brought against organizations that received foreign grants. “That led to the freezing of institutional and then personal bank accounts of NGOs and media groups,” she says. “The ill-gotten wealth of the ruling family and oligarchs grew and criticism or truth-telling around it was deemed “criminal.””

Among those facing repercussions was Emin, founder of a free speech advocacy group called Institute for Reporters Freedom and Safety (IRFS). A police beating in 2008 had left him with brain injuries, according to a case filed against Azerbaijan at the European Court of Human Rights, and when the government launched another crackdown on dissidents in 2014 he went into hiding, aided by his friend and fellow IRFS journalist Rasim Aliyev. Emin spent 10 months living in Baku’s Swiss Embassy before he flew out with a Swiss government delegation who were attending the opening ceremony of the first European Games.

Two months later, Rasim Aliyev died after being beaten in what authorities claimed was an altercation over soccer. “He was murdered and it’s clear to us the investigation was not free and fair,” Emin tells TIME from Geneva.

On March 2, the morning of his release, Mehman visited the cemetery where his mother is buried. He also recorded a tribute at the grave of Elmar Huseynov — an outspoken journalist critical of the Aliyev regime, who was gunned down in 2005. An icon of freedom of expression, Elmar had inspired both Emin and Mehman’s careers. “Even though it’s been 14 years since he was murdered, I tried to show to the government nothing will be forgotten,” he says.

Since his incarceration, Mehman has lost his mother, access to his office, and much of the equipment he needs to work. But some 700,000 now follow his accounts on Instagram, Facebook, and YouTube—with many others anonymously sharing content he creates. Speaking to TIME from a friend’s car near his apartment, which he believes is under surveillance, he says he will use his platform to draw attention to the plight of other jailed dissidents in Azerbaijan. He understands the risks, he says, but “I can’t imagine my life without this work.”

The original version of this story misstated Azerbaijian’s region. It is the Caucasus, not Central Asia. 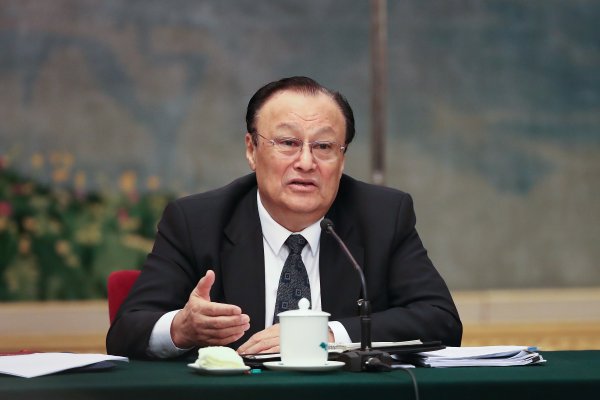 China's Muslim Detention Centers May Be Phased Out, Says Official
Next Up: Editor's Pick