Shamrocks Are Everywhere on St. Patrick’s Day. Here’s How the Three-Leaf Clover Became a Symbol of All Things Irish

St. Patrick’s Day has no shortage of iconography, but for those who celebrate on March 17 — which falls on a Tuesday in 2020 — one symbol stands above the rest: the shamrock.

The holiday, which began centuries ago as the feast day of St. Patrick, the patron saint of Ireland, has become a day in which everyone gets to be Irish — in part by piling on the shamrock gear, and maybe even picking up a “Shamrock Shake” at McDonald’s. (The treat is currently celebrating its 50th anniversary, a representative for the brand told TIME.) The phenomenal global popularity of the festival is largely a result of the United States’ adoption of it. “There’s nothing really Irish about it now,” Patrick Griffin, a history professor at Notre Dame told TIME in 2015. But while the modern version of the Irish holiday may have strayed from its roots, the shamrock is authentically Irish in nature.

“It’s a national emblem,” says Mike Cronin, a historian, professor and the academic director of Boston College’s program in Dublin.

The three-leaf clover, a type of trefoil plant, has been considered the unofficial national flower of Ireland for centuries. Irish legend says that Saint Patrick used the shamrock as an educational symbol to explain the Holy Trinity to nonbelievers as he converted the Irish to Christianity in the fourth century. This folklore solidified in the public conscience in the centuries after Patrick’s death (which is presumed to have happened on March 17). Around the 17th century, Cronin says, the shamrock’s importance began to converge with religious celebration of the saint’s feast day: Those living in poverty still wanted to look nice at church, and luckily for them, an appropriate adornment was growing on the ground outside their homes.

Eventually, the tradition of wearing the shamrock continued to catch on more widely.

The Irish botanist and cleric Caleb Threlkeld wrote a treatise on Ireland’s native plants in 1726 that explained the shamrock as the country’s national symbol, and asserted its significance in the context of St. Patrick’s Day. Threlkeld wrote: “This Plant is worn by the People in their Hats upon the 17. Day of March yearly, (which is called St. Patrick’s Day.)” Continuing to explain why the plant was relevant that day, specifically, Threlkeld said, “It being a Current Tradition, that by this Three Leafed Grass, he emblematically set forth to them the Mystery of the Holy Trinity.” (The writer then goes on to remark on the “debauchery” and “excess in liquor” that was partaken in on that sacred day.)

When a wave of Irish immigrants came to the U.S. in the 18th century, there were no shamrocks growing in New York or Boston or San Francisco. So, while they celebrated their heritage with parties and parades, they substituted the color green and images of the shamrock for the plant itself.

The first U.S. St. Patrick’s Day parade was celebrated in Boston in the 1760s, according to Samantha Bradbeer, historian and archivist for Hallmark. So when Hallmark looked to honor St. Patrick’s Day in the 1920s, the design they should use on their greeting cards was clear. “The most popular symbol was the shamrock,” Bradbeer told TIME in an email. The company actually started with postcards of shamrocks in 1910-1915, before making official cards for the holiday itself, she says.

With the plant established as a symbol of Ireland, Irish brands caught on and helped spread the idea around the world. Irish airline Aer Lingus, for example, adopted the shamrock as its logo. Even when the company rebranded this January, its CEO made clear that the shamrock wasn’t going anywhere. “The Irish emblem has been at the heart of the Aer Lingus brand for more than 80 years, and it will continue to sit proudly across all of our aircraft,” he said in a statement.

The shamrock remains one of the most popular symbols used on Hallmark products and cards for St. Patrick’s Day, and of course, Bradbeer says, all of the products focus on the color green. The Greeting Card Association cites St. Patrick’s Day as the ninth-largest card-sending holiday in the U.S., and Bradbeer says approximately 7 million cards are expected to be exchanged this year.

Though Cronin says the way we regard the shamrock as a symbol of St. Patrick’s Day has lost its religious meaning, it seems that the value of the shamrock itself is not going anywhere.

The original version of this story misstated the location of the first U.S. St. Patrick’s Day parade. It was Boston, not New York. 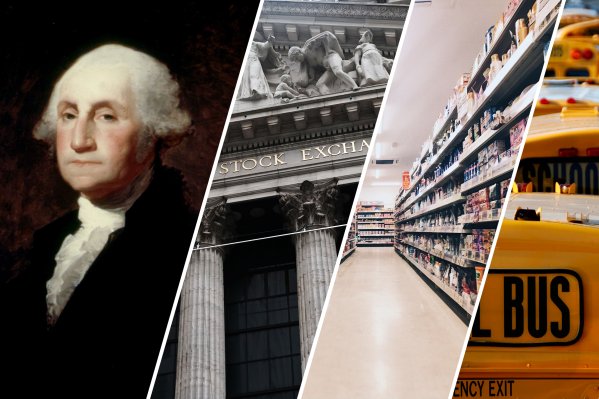 Here's What's Open and Closed On President's Day
Next Up: Editor's Pick