The organization released a statement on their Twitter on Tuesday stating that the fan, Shane Keisel, is permanently banned from Vivint Smart Home Arena, effective immediately, after “excessive and derogatory verbal abuse directed at a player during the game that violated the NBA Code of Conduct.”

The team stated that their decision came after reviewing video evidence and eyewitness accounts.

“The Utah Jazz will not tolerate fans who act inappropriately,” the organization wrote. “There is no place in our game for personal attacks or disrespect.”

Video captured an altercation between a critical fan Keisel and his wife involving Westbrook. “You think I’m playing. I swear to god,” he can be seen saying to Keisel, in the beginning in a video, linked here due to language.

Keisel and four other fans received warning cards, but were able to return to their seats for the remainder of the game.

Following the game, Westbrook told reporters that Keisel and his wife told him to “get on your knees like you’re used to,” which Westbrook said he interpreted as racial, disrespectful and inappropriate.

Two of Westbrook’s teammates, Patrick Patterson and Raymond Felton, who were sitting nearby on the bench during the verbal altercation, said that they heard Keisel make this comment as well.

Despite the accounts of Westbrook’s teammates, Keisel denied saying anything racist or profane to Westbrook, and had a different account of the exchange insisting that he said: “Sit down and ice your knees, bro.”

Westbrook has been fined $25,000 by the NBA for directing profanity and threatening language to a fan, the association announced Tuesday afternoon. 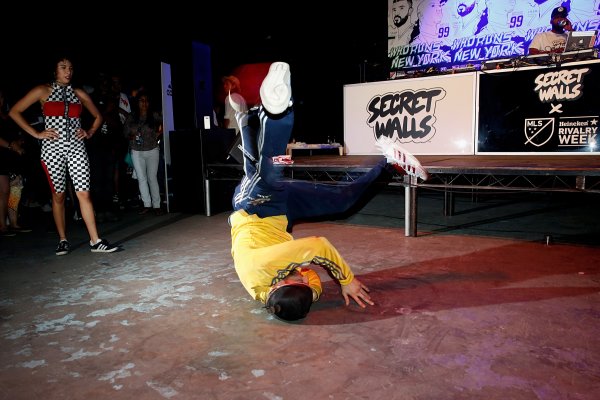 Head-to-Head Breakdancing Battles As an 2024 Olympic Sport? It's a Possibility
Next Up: Editor's Pick