A Dozen Children Were Killed in Yemen Strikes During a Two-Day Period, the U.N. Says

Strikes in Yemen killed 22 people during a 48-hour period early this week, including a dozen children, according to the U.N.

In a statement published Monday, the office of the U.N. Resident Coordinator and Humanitarian Coordinator for the war-ravaged country said as many as 30 others were reportedly injured, among them 14 children aged between 1 and 18, in the northwest province of Hajjah.

“We condemn these deaths and injuries unequivocally,” said Lise Grande, Humanitarian Coordinator for Yemen. “And we share our deep condolences with the families of the victims.”

Yemen has been embroiled in a civil war between a Saudi-led coalition and Iran-backed Houthi rebels since 2015. On average, almost 100 civilian deaths or injuries were recorded weekly in 2018, according to a recent U.N. report.

Across the country, an estimated 85,000 children under five may have died from extreme hunger or disease since the war began. According to UNICEF, eight children are killed or injured across 31 active conflict zones in the country each day.

Hajjah is one of the nation’s worst impacted provinces, with more than a million people hungry and thousands of new cholera cases reported.

“We fear that thousands of civilians are trapped between the parties and lack the basic services they need to survive,” said Grande.

Last year, a photograph of an emaciated 7-year-old girl, Amal Hussain, on a hospital bed in northern Yemen became a symbol of the country’s ongoing crisis.

Western governments have faced increasing pressure over their provision of intelligence, military and other support to the Saudi-led coalition. In November 2018, the Trump Administration announced that the U.S. would stop refueling Saudi warplanes engaged in the bombings, and last month, the U.S. House of Representatives passed a resolution to withdraw U.S. troops from the country. 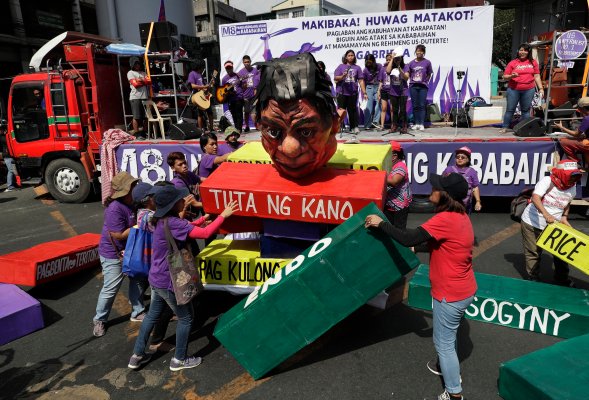 Rodrigo Duterte Calls Women 'Bitches' at Event Honoring Them
Next Up: Editor's Pick