'It’s Embarrassing.' David Beckham Did Not Care For Getting Pranked With an Absolutely Hideous Statue of Himself

David Beckham, the international soccer star, is used to accolades, including a statue built in his honor by the Major League Soccer team the LA Galaxy. What Beckham saw as a great honor, James Corden saw as great opportunity to prank his long-time friend.

On Monday night’s Late Late Show, Corden revealed that he decided that with the help of his show’s props department to create a statue, which Corden describes as “a balance between realistic and absolutely terrible” with an oversized chin and rear. The result was a Beckham statue that was reminiscent of the infamously goofy Cristiano Ronaldo statue created in that soccer player’s honor.

Corden’s team then brought the statue to the LA Galaxy stadium to unveil it for Beckham, in front of a group of actors posing as fans with a fake sculptor proudly displaying his greatest work. When they pulled the sheet off the statue, the soccer player and occasional model, looked noticeably disappointed, much to Corden’s amusement. “It’s slightly different than it was when I saw it in Chicago,” Beckham said as he looked crestfallen.

“I believe, what I did here was try to capture you in motion,” the fake artist told Beckham. The soccer icon tried to be nice, but couldn’t quite manage it: “Yeah but there was capturing me in motion but also making me…look at my chin!” While Beckham did approve of the statue’s hair, he finally admitted, “There is no way that can go in front of the stadium. It’s embarrassing.”

After a forklift tore it down, Corden came out to tell his friend it was all a prank. While Beckham was relieved, he clearly didn’t think it was nearly as funny as Corden did—or the audience watching at home. 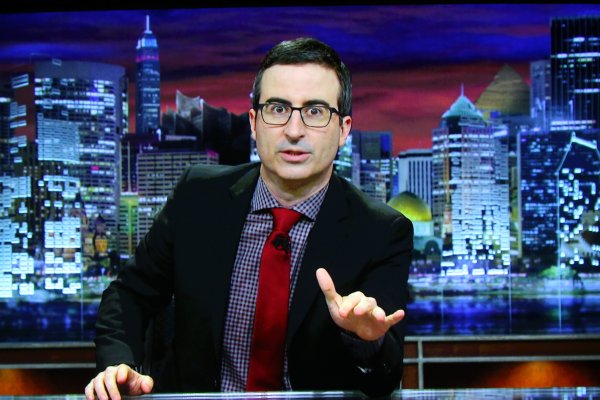