An anonymous London man might consider buying a lottery ticket after a CCTV camera picked up his very near miss with a pile of rubble falling from a roof top.

In the dramatic video, posted by on Facebook by Alexandra Şöhret Marie Hamit, and shared by the BBC, the man was strolling up the Stoke Newington High Street in east London. As soon as he passed the Stoke Vintage Café, a pile of bricks, rubble, and debris fell onto the ground covering the pavement where he stood just moments before. The London Fire Brigade, who was on the scene at around 10 a.m. on Sunday morning after receiving reports of the falling bricks, told the BBC that no one was injured in the disaster. Clean up reportedly took nearly two hours.

The BBC reports that the falling bricks were the result of a building collapsing due to windy weather. Over the weekend, a weather warning was in place for much of Southern England and Wales as 65 mph wind gusts swept through. In addition to the building collapse, the high winds damaged other buildings, knocked down trees, and disrupted travel, according to The Guardian.

The CCTV footage of the incident was posted to Twitter by local football team, Hackney Wick FC. “While the boys were fundraising this happened across the road,” the team wrote in their caption of the video. “A reminder that you can be taken at any time so be thankful for surviving another day.” 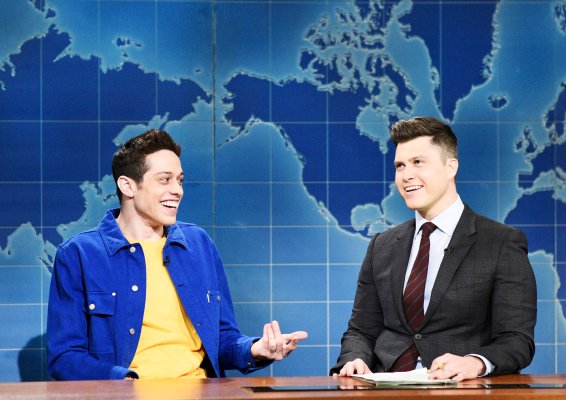