Which Airlines Fly the Boeing 737 MAX 8? Here's a List of North American Operators

By Madeline Roache and Billy Perrigo

After two fatal incidents involving a Boeing 737 MAX 8 in the past six months, several countries and airlines have grounded the aircraft until further notice. But North American carriers are sticking by the MAX 8, at least until further details are known about the latest disaster.

The Lion Air disaster appears to have been caused at least in part by issues with a system designed to prevent stalls, which occur when an aircraft is no longer generating sufficient lift. It’s too early to tell if a similar problem doomed the Ethiopian flight. But with two 737 MAX 8 aircraft involved in fatal incidents in a relatively short period of time, Boeing is now facing tough questions about the plane’s reliability and safety. In terms of commercial aircraft, the MAX 8 is brand new, having first entered service in 2017.

“Safety is a core value for everyone at Boeing and the safety of our airplanes, our customers’ passengers and their crews is always our top priority,” Boeing said in a statement. “The 737 MAX is a safe airplane that was designed, built and supported by our skilled employees who approach their work with the utmost integrity.”

As of Tuesday morning, Ethiopia, China, Indonesia, Singapore, Australia have either grounded their 737 MAX fleets or barred the aircraft from entering their airspace. Most North American airlines, however, are taking a “wait and see” approach, giving investigators time to determine the cause of the most recent incident before taking major action. Removing a large number of aircraft from service, even temporarily, can result in significant disruptions to an airline’s operations.

Here’s a look at the North American carriers that fly the Boeing 737 MAX 8, and their responses so far to Sunday’s Ethiopian Airlines disaster.

American Airlines has 24 of the 737 MAX 8 aircraft in its fleet, has ordered 76 more, and has confirmed to TIME that it will continue to fly the aircraft in the wake of the crashes.

“At this time there are no facts on the cause of the accident other than news reports,” the airline said in a statement. “Our Flight, Flight Service, Tech Ops and Safety teams, along with the Allied Pilots Association (APA) and Association of Professional Flight Attendants (APFA), will closely monitor the investigation in Ethiopia, which is our standard protocol for any aircraft accident. American continues to collaborate with the [Federal Aviation Administration] and other regulatory authorities, as the safety of our team members and customers is our number one priority. We have full confidence in the aircraft and our crew members, who are the best and most experienced in the industry.”

Southwest Airlines has 34 737 MAX 8s in its fleet. It has a longstanding relationship with Boeing and exclusively flies various types of 737s.

“We have been in contact with Boeing and will continue to stay close to the investigation as it progresses,” Southwest Airlines said in a statement. “We remain confident in the safety and airworthiness of our entire fleet of more than 750 Boeing 737 aircraft, and we don’t have any changes planned to 737 MAX operations.”

Aeromexico has six of the aircraft in its fleet (having taken its first delivery as recently as March 1) and has ordered 45 more.

AeroMexico said late Tuesday it has “decided to temporarily suspend” its use of the MAX 8. In the same statement, the company said it “reiterates that it has full confidence in the safety of the fleet” but that the “safety of its operations and the peace of mind of its customers is the top priority.”

Air Canada, which has 24 of the aircraft in use and has ordered 26 more, did not immediately respond to TIME’s request for comment. But the Canadian television station CTV reported that Air Canada said its fleet of the aircraft had performed “excellently” and had no plans to ground the model.

Canadian airline WestJet told TIME it has 13 737 MAX 8 aircraft in its fleet of 121 Boeing 737s, and will continue to fly the planes.

“We are monitoring the situation closely and will not speculate on the cause of the incident,” WestJet said in a statement. “WestJet remains confident in the safety of our Boeing 737 fleet including our 13 MAX 8 aircraft first introduced in 2017. We have flown five different variants of the Boeing 737 since 1996, and the fleet currently operates around 450 safe daily B737 departures.” 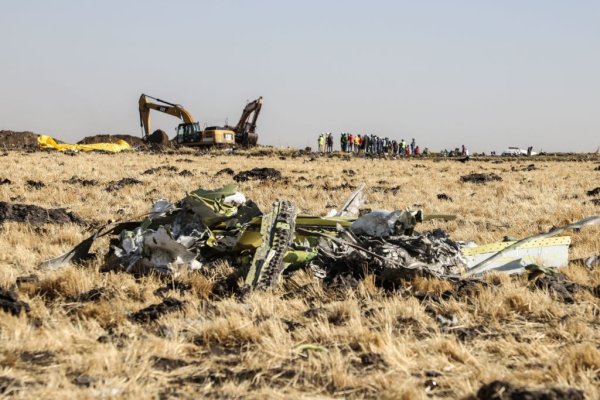 Boeing's Stock Just Dropped the Most Since 9/11 Following Fatal Crash of Second 737
Next Up: Editor's Pick