Boeing Chief Executive Officer Dennis Muilenburg faces his biggest crisis yet following the second deadly crash of a 737 Max jetliner, as some airlines grounded the best-selling plane and the shares logged their biggest loss since the 9/11 attacks.

China ordered its carriers to ground all 96 of Boeing’s newest 737 model, while Indonesia said it would also halt flights after Ethiopian Airlines Flight 302 went down in a field shortly after takeoff Sunday, killing all 157 people on board. While the flight recorders have now been recovered and must be analyzed, the disaster bore similarities to the doomed Lion Air 737 Max that crashed in October.

The 737 Max is Boeing’s most important aircraft type, generating almost one-third of the company’s operating profit and forming the backbone of many global airline fleets who use the model and Airbus’s competing A320 family on shorter routes.

“Boeing has lost control of the timetable to provide the safe, reliable solution,” said Neil Hansford, chairman of the Australian consultancy firm Strategic Aviation Solutions. “The longer it goes, the more chance Boeing has of losing orders.”

The grounding in China, followed by the Indonesian air safety regulator’s order to halt 737 Max flights from Tuesday, raises the specter of other countries following suit. South Korea began a special inspection of the aircraft, while in Europe, regulators said they’re in contact with their U.S. counterparts as well as Boeing, but that it’s too soon to take action.

While the groundings in China and elsewhere are important, most nations typically wait to act until the U.S. and Europe issue findings on aviation matters. The Federal Aviation Administration and the European Union Aviation Safety Agency oversee the world’s largest aircraft manufacturers and take the lead in ensuring the safety of their planes.

Investigators have recovered the cockpit voice and flight-data recorders, Ethiopian Airlines said Monday, a significant step forward in piecing together what happened.

Chinese airlines accounted for about 20 percent of 737 Max deliveries worldwide through January, and further purchases of the Chicago-based planemaker’s aircraft are said to have been touted as a possible component of a trade deal with the U.S.

China Southern Airlines Co. has 16 of the aircraft, with another 34 on order, according to data through January on Boeing’s website. China Eastern Airlines Corp. has 13, while Air China Ltd. has 14, Boeing says. Other Chinese airlines that have bought the Max include Hainan Airlines Holdings Co. and Shandong Airlines Co., the data show.

Lion Air, which is based in Indonesia, is one of the biggest customers, having ordered 201 Max planes and taken delivery of 14.

The single-aisle 737 Max is poised to generate about $30 billion in annual revenue as factory output rises to a 57-jet monthly pace this year, according to Bloomberg Intelligence estimates.

The disaster in Ethiopia followed the crash of Lion Air’s 737 Max off the coast of Indonesia on Oct. 29. A preliminary report into that flight indicated that pilots struggled to maintain control following an equipment malfunction. The U.S. Federal Aviation Administration is working with Boeing on a possible software change to reduce the chances that such a failure could cause an accident in the future.

Boeing responded to the earlier crash by advising pilots that the Max’s so-called angle-of-attack sensor can provide false readings, causing the plane’s computers to erroneously detect a mid-flight stall in airflow. That in turn can cause the aircraft to abruptly dive to regain the speed the computer has calculated it needs to keep flying. Pilots could counteract the sudden downward tilt by following a checklist in their training manual, the planemaker said.

The doomed Ethiopian jetliner left Addis Ababa at 8:38 a.m. local time, and contact was lost six minutes later, the company said in a statement. There were people from 35 nations on board, including 32 Kenyans, 18 Canadians, nine Ethiopians and eight Americans. The United Nations, which is hosting an environmental conference this week in Nairobi, said it lost 19 staff members in the crash.

The pilot of the ET302 reported problems shortly after takeoff and was cleared to return to the airport, said the airline’s chief executive officer, Tewolde GebreMariam. The 737 Max 8 hadn’t had any apparent mechanical issues on an earlier flight from Johannesburg, he said.

Ethiopian Airlines had five of the planes in operation as of the end of January and orders for a further 25, according to Boeing’s website. Boeing has dispatched a technical team to assist the investigation into the Ethiopian Airlines plane, which was delivered new in November to Africa’s biggest carrier, while the FAA, which originally certified the 737 Max and U.S. National Transportation Safety Board have also joined the probe.

Jet Airways India Ltd. and SpiceJet Ltd., two Indian airlines that use the 737 Max jet, and the country’s regulators have asked Boeing for information following the Ethiopia crash.

Southwest Airlines says it’s “confident in the safety of our fleet” including its 34 737 Max 8 planes American Airlines Will closely monitor the investigation via Boeing and NTSB Singapore Airlines Monitoring the situation; the 737 Max 8 flights operated by SilkAir are flying as scheduled Icelandair Says it’s had no issues with its three 737 Max 8s Korean Air Due to receive its first Max in April, is monitoring the situation Cayman Airways Grounds both its Boeing 737 Max 8 aircraft Thailand Says it currently has no plans to ground Boeing 737 Max jets China Grounds entire fleet of Boeing 737 Max 8 jets. China Eastern to talk with Boeing about losses caused by grounding. Flydubai Says it’s monitoring situation and in touch with BoeingA U.S.-ordered grounding of an entire model of aircraft is extremely rare and in the past has typically not occurred so soon during an investigation when few details are known. The last time the agency did so was in January 2013 as a result of overheating lithium-ion batteries on Boeing’s 787 model. The agency only acted after the second such incident occurred.

Muilenburg, 55, was running Boeing’s defense business during the Dreamliner’s grounding. Since he took the reins as CEO in July 2015, Boeing has dramatically expanded cash flow and the shares have tripled. That has boosted the company’s market value by $140 billion and made Boeing the biggest U.S. industrial company. 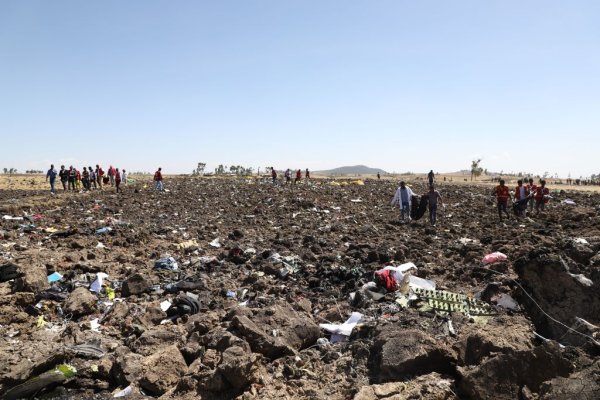 'A Big Question Mark'
Next Up: Editor's Pick