'We’re as Sick as Our Secrets.' How Eliza Dushku Is Taking Back the Power After Her #MeToo Story

This is an unusual interview. I am not meeting Eliza Dushku in a Beverly Hills restaurant or the bar of a hotel in SoHo, where celebrity profiles are usually set. Instead, I find Dushku in a coffee shop just off Harvard Square. Inside, dozens of students in hoodies hunch over their laptops, writing papers. Dushku has become one of these sweatshirt-clad students: she’s currently studying holistic psychology, a therapeutic modality that integrates mind, body and spirit, at Lesley University. After spending nearly 30 years working in Hollywood, Dushku says she’s been getting a lot of calls from friends, a tinge of concern in their voices. “So, you’re in Boston?”

Yes, she is. Because Dushku has been thinking a lot lately about the narrative of her life, and she’s decided that learning more about how to heal others is her next step. That queasy feeling women who’ve experienced harassment get every time they hear a new #MeToo story — she wants to study that, because she’s experienced it. A lot.

Eliza Dushku has played plenty of tough women onscreen — a rebellious vampire slayer in Buffy, a foul-mouthed cheerleader in Bring It On and a savvy lawyer on the CBS show Bull — but offscreen, she’s been to hell and back. She says she was molested as a child actor on the set of True Lies. For years, she struggled with addiction. Most recently, she was fired from Bull after she complained that her co-star Michael Weatherly had sexually harassed her. And she had hard evidence: astonishingly, Weatherly made some of his lewd comments while the cameras were rolling. CBS eventually paid her $9.5 million in a settlement, a fraction of what she would have made had she been able to complete the six-year contract she says the network initially proposed.

“I have never been this nervous for an interview,” she says now. “I’ve always been outspoken and honest. But I’m not used to being this vulnerable.”

I want to talk about the sexual harassment. It’s the reason I took a 7 a.m. train to Boston. But that’s the other unusual aspect of this interview: Dushku can’t actually discuss the incident or the settlement. In order to be paid for the work she had already done, she agreed to sign a nondisclosure agreement. Nobody would have known about Weatherly’s alleged behavior—how, she says, he played “Barracuda” on his phone when she walked by, how he would declare in front of the crew that he wanted to have a threesome with her, how he yelled at her, “I will take you over my knee and spank you like a little girl” when she flubbed a line — if it weren’t for CBS’ systemic harassment problem.

In August, the New Yorker published an article chronicling then CEO Les Moonves’ alleged sexual misconduct, leading the network to fire Moonves and launch an internal investigation of the company culture. Details of that inquiry — which concluded, among other things, that CBS’ handling of Dushku’s case “was misguided” — leaked to the New York Times. Dushku couldn’t comment to the paper because of her NDA, but once she saw that Bull showrunner Glenn Gordon Caron and Weatherly had given quotes, despite their settlement terms, she wrote an op-ed about her experience, which was published in the Boston Globe.

But she fears that talking about the complaint further could incite litigation. We can talk around it. And about everything that led to that moment in her long career. And how she wants to make clear that she has not been exiled in Hollywood. She lost a parent in her hometown of Boston four years ago, and moved back after spending 18 years in L.A. She had always wanted to get her college degree, specifically in her hometown, because her mom taught at Suffolk University for 47 years.

But the child-star thing happened, so now, at 38, she’s back in school. She’s living just blocks from where she grew up, where her family still lives, where she plans to raise the baby she will soon have with her new husband. She’s always loved it here and even named her production company Boston Diva back when she was 17. Under that banner she produced the movie Mapplethorpe, based on the life of photographer Robert Mapplethorpe, out now. “I need the distance to recalibrate and start a family,” she says. “But I don’t want people to think coming forward means ending your career. I could be acting. I could be in L.A. I just need to be here right now.”

You might think Eliza Dushku is a badass. Hollywood, at least, always saw her that way. Since she began acting at the age of 9, she’s played a lot of roles where she’s had to fight men, physically or intellectually. Fans often conflate the person they see onscreen with the actor portraying that character. “I remember when I started on Buffy, I would get letters that would say, ‘Watching the strength in your character made me confront my abuser,’” she says. Dushku felt both emboldened and terrified by these notes, since she had tried to do the same thing years before.

Last year, she wrote on Facebook that when she was 12 and playing the daughter of the characters portrayed by Jamie Lee Curtis and Arnold Schwarzenegger in True Lies, a stunt coordinator named Joel Kramer, then 36, molested her. (Kramer has denied the allegations.) Dushku’s guardian on set, Sue Booth-Forbes, has said she reported Kramer to a “person of authority,” and nothing was done. James Cameron, the director of that film, has said that he did not know about the behavior at the time but that he believes Dushku.

For years, Dushku abused alcohol and drugs, even as her career blossomed. “We carry trauma in our bodies. That’s where addiction comes in,” she says. “People try to numb themselves.” It got so bad that her brother wouldn’t let her spend time with her niece. That pushed her to get help; she’s been sober for 10 years and open about her struggle.

Bull was Dushku’s biggest role on a broadcast show since she starred in Fox’s Dollhouse in 2009. And when the on-set harassment began, Dushku decided to try to take it up directly with Weatherly and resolve the issue privately. Shortly after she spoke with him, she says she was fired by CBS. Weatherly, in the Times article, accused Dushku of not having a good sense of humor, claiming he was merely mimicking the comic lines Cary Grant used in movies like The Philadelphia Story. In her response in the Globe, Dushku wrote that excuse “asks us to believe that Hollywood behaviors from 70 years ago might be acceptable today.” She also writes that when her representatives spoke to Caron about her firing, Caron defended Weatherly’s behavior by saying, “What does [Eliza] expect? She was in Maxim.” (A person close to Caron denied that Caron made any such comment, and the representative declined to comment.)

She’s frustrated but not surprised. In her three decades in the acting business, she heard warnings about certain powerful men, like Harvey Weinstein. For nearly 30 years, nothing changed. “I guess what makes me angry is people knew. Important people knew,” she says. “They could have done something. And they didn’t.” (Bull, now in its third season, is the 10th most watched show on network TV. Weatherly previously starred on NCIS, CBS’ most popular drama, for 13 seasons.)

I can tell Dushku is growing frustrated with all the things she cannot say: “We’re talking in code. NDAs re-victimize people. They give more power to the powerful. And as the less powerful person, you have to live in someone else’s f-cked-up version of reality.”

Though Boston feels far from Los Angeles, Dushku is positioning herself to finally be the one with the power. She produced Mapplethorpe, Boston Diva’s first feature. It took 14 years for her and her brother to produce this biopic of the gay photographer who displayed photos of flowers in the Whitney and ones of bondage in an underground studio in the ’70s and ’80s. He might seem like an unlikely subject for Dushku. But she was intrigued by the story of an artist who was defined by controversy instead of his personhood.

Dushku is still puzzling out what her own story will be. Here’s one narrative, the one in the press: Like many women in Hollywood, Eliza Dushku experienced sexual harassment and was fired. She signed an NDA that hamstrung her from speaking out. She’s since been driven out of Hollywood.

Here’s another: Eliza Dushku accidentally fell into acting. She always imagined going to college in Boston and recently fulfilled that dream. She decided to study a subject that might help with her own healing process after a difficult past. When she saw her chance to speak out about her #MeToo experiences, she seized it. She doesn’t quite know what’s next, but she’s married and pregnant and happy. She still wants to act — her next project is a sci-fi adaptation in which she will star — but it will be on her own terms: she’ll be a producer as well. “Humans need a cohesive narrative for who they are,” she says. “And we’re as sick as our secrets. So naming our secrets — that’s a part of healing.”

The original version of this story misstated the network on which Dollhouse aired. It was Fox, not The CW. 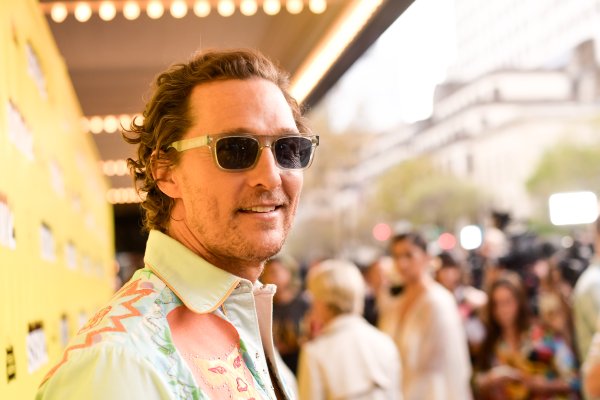 Matthew McConaughey Has an Interesting Take on His Next Role
Next Up: Editor's Pick