For years, President Donald Trump has complained that countries hosting American troops aren’t paying enough. Now he wants to get even, and then some.

Under White House direction, the administration is drawing up demands that Germany, Japan and eventually any other country hosting U.S. troops pay the full price of American soldiers deployed on their soil — plus 50 percent or more for the privilege of hosting them, according to a dozen administration officials and people briefed on the matter.

In some cases, nations hosting American forces could be asked to pay five to six times as much as they do now under the “Cost Plus 50” formula.

Trump has championed the idea for months. His insistence on it almost derailed recent talks with South Korea over the status of 28,000 U.S. troops in the country when he overruled his negotiators with a note to National Security Advisor John Bolton saying, “We want cost plus 50.”

The president’s team sees the move as one way to prod NATO partners into accelerating increases in defense spending — an issue Trump has hammered allies about since taking office. While Trump claims his pressure has led to billions of dollars more in allied defense spending, he’s chafed at what he sees as the slow pace of increases.

“Wealthy, wealthy countries that we’re protecting are all under notice,” Trump said in a speech at the Pentagon on Jan. 17. “We cannot be the fools for others.”

Officials caution that the idea is one of many under consideration as the U.S. presses allies to pay more, and it may be toned down. Yet even at this early stage, it has sent shock waves through the departments of Defense and State, where officials fear it will be an especially large affront to stalwart U.S. allies in Asia and Europe already questioning the depth of Trump’s commitment to them.

Victor Cha, a senior adviser at the Center for Strategic and International Studies in Washington, said the administration was sending a deliberate message by demanding “Cost Plus 50” from South Korea first, even though that effort fell short.

“We have a more integrated military with South Korea than with any other ally,” Cha said. “To send this message to a front-line Cold War ally is trying to say very clearly that they want a paradigm shift with the way they do host-nation support.”

Another concern is that the U.S. will fan ongoing debates in some countries about whether they even want U.S. troops. While some countries including Poland have openly advocated for U.S. troops, others like Germany and Japan have populations that have long resisted the American presence. Those forces would probably be energized if the U.S. gives what they see as an ultimatum.

“You start tipping over rocks and see what crawls out and you’ve got to be ready for it,” said MacKenzie Eaglen, a defense policy expert at the American Enterprise Institute. “You’re going to see domestic political debates wrapped around these military bases once you reopen the discussion.”

Trump has been musing about the idea that countries should pay the full cost, plus a premium, since taking office. His ambassador to the European Union, Gordon Sondland, said it’s all about making sure other countries have “skin in the game.”

“If you have countries which clearly can afford to do it and are not doing it because they think we’ll just step in and do it for them, the president has a problem with that,” he said in an interview.

Sondland declined to say which countries would be targeted and wouldn’t elaborate when asked specifically about the “Cost Plus 50” approach.

Current and former administration officials briefed on the idea, who asked not to be identified discussing the program, describe it as far more advanced than is publicly known. As well as seeking more money, the administration wants to use it as a way to exert leverage on countries to do what the U.S. demands overseas.

As evidence, they say officials at the Pentagon have been asked to calculate two formulas: One would determine how much money countries such as Germany ought to be asked to pay. The second would determine the discount those countries would get if their policies align closely with the U.S.

Germany now pays about 28 percent of the costs of U.S. forces based there, or $1 billion a year, according to David Ochmanek, a researcher at the Rand Corp. Under “Cost Plus 50,” its payments would skyrocket, as would those of Japan and South Korea.

Officials at the State Department and Defense Department declined to comment. Officials with Japan, Qatar and the United Arab Emirates said they hadn’t been approached. A German embassy spokesman said there was no discussion underway.

At the National Security Council — where officials say the idea originated — officials declined to confirm or deny the proposal.

“Getting allies to increase their investment in our collective defense and ensure fairer burden-sharing has been a long-standing U.S. goal,” NSC spokesman Garrett Marquis said. “The administration is committed to getting the best deal for the American people elsewhere too but will not comment on any ongoing deliberations regarding specific ideas.”

Disputes over burden-sharing for U.S. troops deployed overseas date back decades. Washington and Tokyo have long clashed over the presence of U.S. forces on Okinawa, for example. But the current discussion about “Cost Plus 50” goes further. It echoes a theme often championed by former White House adviser Stephen Bannon that the U.S. wants “allies, not protectorates.”

Critics argue that the demand also misreads the benefits that overseas troop deployments bring to the U.S.

“Even raising this question feeds a misinformed narrative that these facilities are there for the benefits of those countries,” said Douglas Lute, a former U.S. ambassador to the North Atlantic Treaty Organization. “The truth is they’re there and we maintain them because they’re in our interest.”

In Germany, for instance, the U.S. relies on several crucial installations: the Landstuhl Regional Medical Center and the Ramstein Air Base. Landstuhl is a world-class medical facility that has provided emergency care to U.S. soldiers wounded in Iraq and other trouble spots.

Germany is also home to the headquarters of the U.S. Africa Command. Estimating how much Germany ought to pay for those bases, which serve so many other interests, would be complicated.

In South Korea’s case, the two countries had a deal to renew their five-year Special Measures Agreement, only to see it scuttled by Trump’s insistence on “Cost Plus 50” in October. The final increase agreed on was much more modest and its duration was shortened to one year, with the expectation of another fight to come.

“There are a lot of countries that would say you’ve got it absolutely wrong — you think we’re going to pay for this?” said Jim Townsend, a former deputy assistant secretary of defense who was a career Pentagon and NATO civil servant. “I hope cooler heads prevail.” 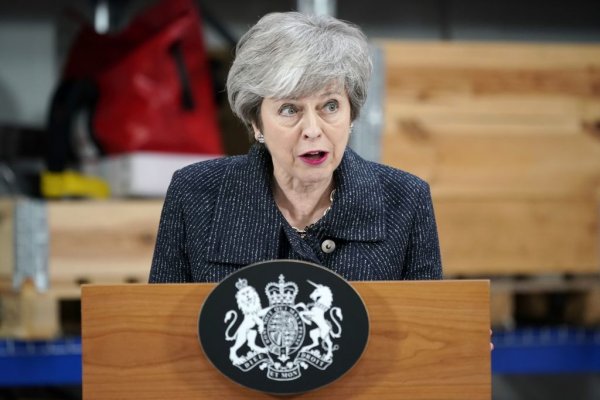 The U.K. Might 'Never Leave' the E.U. If Deal Doesn't Pass, Theresa May Says
Next Up: Editor's Pick