John Oliver Fights Back Against Robocalls on Last Week Tonight

John Oliver lashed out against automated phone calls on Sunday night’s episode of Last Week Tonight, suggesting that robocalls are so aggravating that “hatred of them may be the only thing that everyone in America agrees on right now.”

While Oliver admitted that some robocalls are useful, such as automated calls about school closings or prescription reminders, “the vast majority vary from irritating to outright illegal.” It’s not just small or disreputable companies using robocalls, either. According to Oliver, the top robocallers each year include Capital One, Comcast, and Wells Fargo, who use the technology to “chase debts.”

And it’s getting worse, too, according to Oliver, who cited statistics showing that the number of robocalls increased by 57% last year, reaching nearly 50 billion robocalls in total. Some pundits estimate that robocalls will soon account for half of American’s mobile phone calls, Oliver said. The dramatic escalation in the number of robocalls has reportedly made the obnoxious practice the No. 1 complaint to the FCC every year, totaling more than 500,000 complaints a year, about 60% of all complaints received by the FCC. “They are definitely aware of the problem,” Oliver said.

To alert the FCC to exactly how irate people are about the problem, Oliver set up a robocall to all five of its commissioners, including his frequent target FCC chairman Ajit Pai, urging them to address the scourge that is plaguing America’s phone lines. At the click of a big red button, FCC members’ phones began ringing every 90 minutes, playing a recorded message that said, in Oliver’s voice: “Hi, FCC! This is John from customer service. Congratulations! You’ve just won a chance to lower robocalls in America today. Sorry, but I am a live person. Robocalls are incredibly annoying, and the person who can stop them is you! Talk to you again in 90 minutes. Here’s some bagpipe music.” 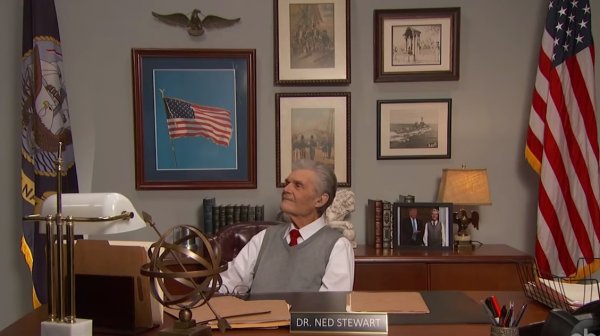