R. Kelly's Girlfriends Claim Their Parents Tried to Exploit Them to Get Money From the R&B Singer

The two women who live with R. Kelly — Azriel Clary, 21, and Joycelyn Savage, 23 — attacked their own parents as they defended the 52-year-old R&B singer against accusations that he has held them hostage.

Both women claim that their parents have tried to exploit them to get money from the controversial singer, who was charged last month with 10 counts of sexual abuse. The families of Clary and Savage have denied ever asking Kelly for money. They say Kelly has brainwashed their daughters and that Clary and Savage have exhibited signs of Stockholm syndrome.

In an interview with CBS’s Gayle King, segments of which aired Thursday, Clary and Savage staunchly defended Kelly against allegations by their parents that the singer is abusing them or holding them against their will. Clary claimed that her parents encouraged her to pursue Kelly.

“When I first met Robert, my parents told me to lie about my age. So, when I met him, he thought that I was 18,” Clary told King. “On top of that, when I was 17, my parents were actually making me, trying to get me to take photos with him, take sexual videos with him, all kinds of stuff.”

Clary denies she had sex with Kelly until she was 18 years old.

Clary’s claims echo comments made by Kelly in an angry exchange with King that aired on CBS on Wednesday. Kelly, who denied sexually abusing any women, dismissed allegations that he has held women in captivity, saying he loves and has relationships with Clary and Savage and that the women’s parents had pushed their daughters to get close to him to benefit their music careers.

“What kind of father, what kind of mother would sell their daughter to a man?” Kelly said.

Asked if Clary and Savage’s parents had “handed their daughters” to him, Kelly replied, “Absolutely.”

Clary told King her parents encouraged her to “do sexual videos with R. Kelly” so they could use it for “blackmail.”

“They said, because if they ever have to blackmail him, what they’re trying to do now, they can use it against him, which is exactly what they’re doing,” Clary said.

As Clary spoke, Savage nodded in agreement. She said, “Everything that she’s saying is true.”

“Both our parents are basically out here trying to get money and scam, because they didn’t agree on what happened, you know, with music or whatever it could be,” she said. “And they’re just very upset.”

Clary grew emotional as the interview went on. She called her father a “manipulator,” and said that both her parents had threatened her and Kelly to get money.

She then broke down in tears, saying she was crying because “you guys don’t know the truth.”

“You guys believe in some f—ing façade that our parents are saying,” she said. “This is all f—ing lies for money. If you can’t see that you’re ignorant and you’re stupid.”

The interview also became heated when King questioned the sexual nature of the Kelly’s relationship with both Clary and Savage. When King asked if they had a three-way sexual relationship, Clary said she was not going to talk about her personal life or share what she does “in or outside of the bedroom.”

As King noted that she was speaking to the women under a “very different circumstance,” Clary strongly disagreed.

“There are people all over the world who have multiple girlfriends,” she said. Both women said they were in love with Kelly.

After the interview, King said Kelly was present in the room as she spoke to the women and that he cleared his throat loudly as certain topics were brought up.

Both Clary and Savage’s parents have maintained that they did not ask Kelly for any money.

Michael Avenatti, the attorney representing Clary’s parents, issued a statement on their behalf on Wednesday, in which they denied ever receiving or requesting money.

Following Kelly’s interview with King on CBS on Wednesday, the Savage family held a press conference in which they strongly denied ever asking for money from the singer.

“We want the record to remain clear that at no point did Tim, Jonjelyn Savage ever request, ever demand, ever receive financial compensation from Robert Sylvester Kelly,” said Gerald Griggs, the attorney representing the family.

After the press conference, which was held in Atlanta, Savage called her parents and they spoke to her for the first time in what they said was two years, according to a CBS Atlanta reporter.

Kelly, who was released from jail after posting a $100,000 bail last week in the sexual abuse case, was taken into custody again on Wednesday after failing to pay more than $160,000 in child support to his ex-wife. 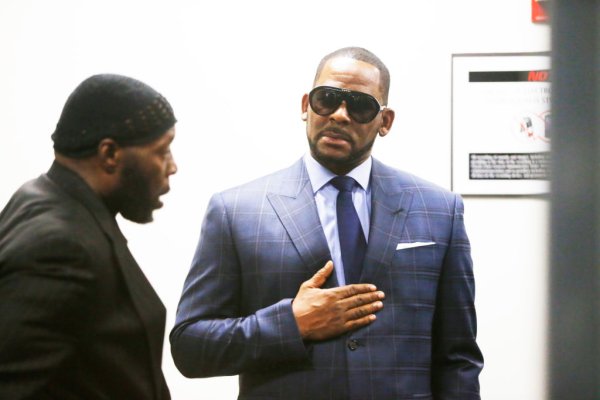 Here's What R. Kelly Says Happened to His Millions
Next Up: Editor's Pick