The Quick Read on the Protests in Algeria

Several thousand students are returning to Algiers in Algeria on March 05, 2019 and in several cities in Algeria against the fifth candidacy of President Abdelaziz Bouteflika.
Billal Bensalem—NurPhoto via Getty Images
By Ian Bremmer

Protests continue to rock Algeria, an energy-rich country that hasn’t experienced demonstrations of this magnitude in decades. The trigger is the decision of the sitting president—Abdelaziz Bouteflika—to run for a fifth term. In defiance of the protests, Bouteflika went ahead and filed the paperwork to run again for Algeria’s presidency this week. Or rather, a proxy of his did—more on that below.

Bouteflika managed to escape the 2011 Arab Spring unscathed by significantly upping the government’s welfare spending to help buy peace. That’s no longer an option. Why? The most pressing reason is that oil prices aren’t at the level where Algeria’s government can do that anymore (Venezuela’s Nicolas Maduro can certainly commiserate). A second reason has to do with the fact that Algeria’s youth—like many other young populations in the region—suffers from high unemployment. Youth unemployment will take risky reforms and years to fix; it can’t be resolved over the next couple of months.

These two issues—falling oil revenues and high youth unemployment—plague several countries. In Algeria, they’ve fueled a combustible political situation. The fact that Algeria is also a major oil producer also means that sustained political unrest in the country has the potential to affect global oil markets as well. And its geographic location in North Africa means that a politically stable Algeria has been an important player in stabilizing migration flows from Africa into Europe. If the situation spirals out of control there, there are no guarantees as to what will happen.

Then there’s Bouteflika himself, who just celebrated his 82nd birthday on Saturday. Bouteflika has been running Algeria since 1999 and until 2011 was doing so under emergency rule (a holdover from a bloody civil war with an Islamic insurgency that left more than 200,000 people dead). In 2013, he suffered a stroke and has been seen very rarely in public ever since; his last public speech was in 2014. The reality is that his handlers (which include his brother and certain key military officials) have been running the country in his absence. The prospect of reelecting an infirm, largely incapacitated elderly person—which in effect means electing his patronage network—is too much for Algerians already aggrieved by the country’s political and economic situation to bear.

The hundreds of thousands of protestors aren’t united on much beyond the fact that Bouteflika must step down. That’s a problem for Algeria in the long run, but a much bigger problem for Bouteflika and his patronage network in the short term. Authorities are bracing for more large marches later this week.

The announcement by Algeria’s ruling coalition on Sunday that Bouteflika would indeed run for a fifth term, but wouldn’t serve the full term marked a concession to protestors—and a sign that the elites propping him up are grasping at straws to cling to power in any way they can. Some question why they don’t just offer up another puppet candidate instead. The reason is there is nobody else who can ensure balance among the factions that have been profiting from Bouteflika’s presidency for years now — not to mention that anyone with a pulse now seems to pose an unacceptable risk to those same competing interests.

High youth unemployment is a problem under the best of circumstances. It’s an existential threat when nearly 70 percent of the country is under the age of 30.

“I am not saying this to scare people, no. I am not trying to take advantage of the past, but we should also remember that in Syria it also began with roses,” Prime Minister Ahmed Ouyahia. When you’re invoking Syria to calm the political situation in your own country, you know things are getting out of control.

That this is an unabashedly strong sign for democracy in Algeria. Only a subset of the protestors want to reform the country’s politics in the direction of Western liberal democracy. Most just want corruption to be addressed in some way, and that starts by showing Bouteflika the door. In other words, an Arab Spring 2.0 this is not.

From Algeria to Venezuela, petrostates are unequipped to buy off their populations like they once could. It’sgoing to be even harder as renewables become ever-cheaper. And we haven’t even gotten to the part where climate change forces millions of people to search for better lives beyond their own borders. Algeria is a unique case to be sure, but it’s also part of a narrative that’s only going to grow larger in the decades to come. 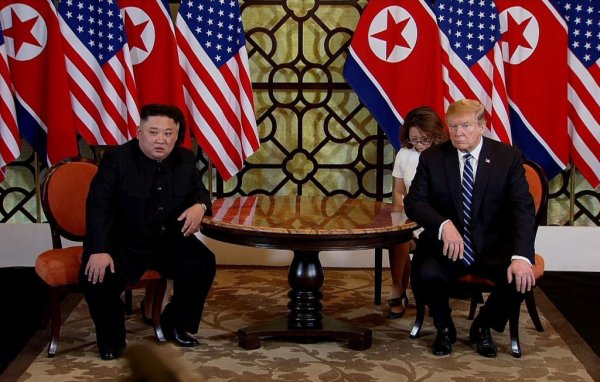 The Quick Read on the Trump-Kim Summit in Hanoi
Next Up: Editor's Pick