Here's What Went Through Gayle King's Mind When Her R. Kelly Interview Took a Frightening Turn

A striking image of Gayle King staying calm while R. Kelly, seemingly overcome with frustration and anger, stands up and raises his hand while towering over her during their interview has garnered widespread praise as people commend the CBS host for her composure in a stressful situation.

Kelly spoke with King in his first interview after being charged with 10 counts of sexual abuse last month. The controversial R&B singer angrily denied the allegations while speaking with King.

The 52-year-old has been accused of sexually abusing four victims — at least three of whom were allegedly underage at the time — according to prosecutors. Kelly, who was acquitted on child pornography charges in 2008, came under scrutiny in January when the docuseries Surviving R. Kelly explored longstanding rumors about his behavior with women.

Kelly grew increasingly emotional in his interview with the 64-year-old King. In one tense moment, he stood up and looked directly at the camera.

“I’m fighting for my f-cking life,” he cried out, as he stood and raised his arm. “Y’all killing me with this sh-t. I gave you 30 years of my f-cking career.”

King, meanwhile, did not appear ruffled by Kelly’s strong reaction.

“At no point did I think he was going to harm me,” she said on CBS after the interview aired.

The still of King keeping her cool while Kelly towers over her affected many viewers, who admired her demeanor. 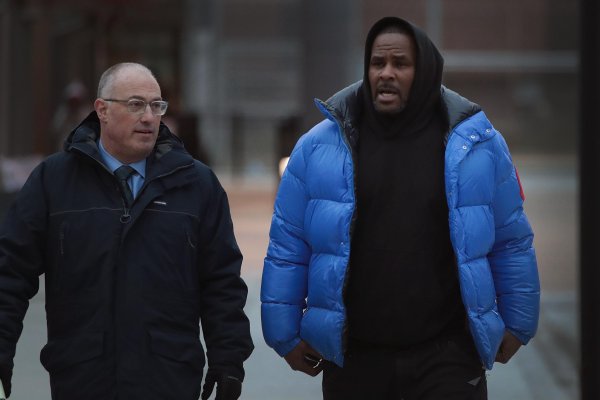