What Next for Brexit: Britain Plays the Ultimate Game of ‘Deal or No Deal’

Britain's Prime Minister Theresa May gives a press conference after a special meeting of the European Council to endorse the draft Brexit withdrawal agreement and to approve the draft political declaration on future EU-UK relations on November 25, 2018 in Brussels.
Emmanuel Dunand—AFP/Getty Images
Ideas
By Amanda Sloat

Sloat is a Robert Bosch senior fellow in the Center on the United States and Europe at the Brookings Institution. She was a Research Fellow at Queen's University Belfast from 2001-2005.

Brexit with a deal. Brexit without a deal. No Brexit. Those are the only possible destinations on the United Kingdom’s torturous journey toward determining its future relationship with the European Union. An extension, election, or second referendum would simply be a detour on the road toward one of those endpoints.

In mid-March, British lawmakers (known as members of parliament or MPs) will determine the country’s next step. British Prime Minister Theresa May, who suffered a crushing defeat when Parliament rejected her Brexit plan on January 15, has promised a second attempt by March 12. If it fails, MPs will vote by March 13 on whether the U.K. should leave the E.U. without a deal. If they believe dire predictions about a catastrophic exit, they will vote by March 14 on whether to ask the E.U. to extend negotiations. May will meet European leaders at a March 21 EU summit, where her exasperated colleagues will be eager to finalize plans. Unless there is an agreed extension, the UK will leave the E.U. on March 29 – with or without a deal.

Recent drama in London – namely, the defection of 9 Labour MPs and three Conservative MPs from their respective parties and the formation of a new Independent Group opposing Brexit – has shifted the playing field. Facing further resignations, Labour leader Jeremy Corbyn half-heartedly backed a second referendum and May promised a vote on extending the Brexit deadline. However, the fundamental problem remains: there is no parliamentary consensus on a way forward.

The main stumbling block to May’s deal is the backstop for Northern Ireland, an insurance policy designed to prevent the return of border infrastructure to a post-conflict region. (Until London and Brussels negotiate post-Brexit economic arrangements, the backstop says the entire U.K. will remain in a customs union with the E.U. plus Northern Ireland will comply with single market regulations on goods.) Parliament has demanded changes, with some MPs afraid it could trap the U.K. into a customs union with the E.U. But the E.U. has repeatedly said it will not renegotiate the withdrawal agreement, nor will it add time limits or a unilateral exit clause to the backstop. The success of May’s plan could hinge on whether U.K. Attorney General Geoffrey Cox — a Brexiteer more trusted by the Conservative right than May — can negotiate an addendum that puts into legalese the EU’s previously given assurances and sufficiently assuages concerns.

With Brexit unfolding like a choose-your-own-adventure story, predictions about the next chapter are a risky parlor game. The most likely outcome remains ratification of May’s deal, at some point. MPs could be swayed by tweaks to the backstop or by fear —either of no deal or no Brexit. If her deal is narrowly defeated, May could use the E.U. summit to seek concessions and make a third attempt before the deadline. Although the prospect of an extension request makes a no-deal Brexit less likely in March, it remains the default until there is a deal.

At this stage, virtually all paths require an extension. If MPs endorse her deal, the European Parliament still must ratify the agreement and the British parliament must adopt implementing legislation. If the U.K. requests an extension, EU leaders will likely accept a short delay — albeit with conditions — in order to appear helpful rather than punitive. The new cliff edge would probably fall before July 2, the date on which the new European Parliament — with members elected in late May —begins its term. (Others argue a 21-month extension would be preferable so the sides can determine their future relationship.) If there is no deal, both sides may want to postpone the exit date to manage the U.K.’s hard departure.

Corbyn’s newfound support for a second referendum has buoyed the hopes of Remainers. This is the only viable path for no Brexit, with the E.U.’s top court ruling last fall that the U.K. could unilaterally revoke its notification to leave. However, parliamentary math makes this option unlikely: although opposition parties back a people’s vote, the number of Labour MPs from Leave-supporting constituencies who oppose a do-over are more than double the Conservative MPs who favor a poll. There are also practical challenges, including the need for parliament to agree on the question on the ballot (the first referendum took seven months to prepare) and potentially inconclusive results (with opinion polls showing limited shifts in voter preferences).

The final scenario is new elections, a prospect that unnerves the Conservative Party following a disastrous result in June 2017 snap polls. If May cannot pass her deal given opposition to the backstop, she may be forced to pursue a softer Brexit via a permanent customs union with the E.U. Although this approach would attract Labour support, it could split her party and trigger elections.

Given the serious consequences of a no-deal Brexit – from food security and trade disruption to the Irish border and citizens’ rights – as well as the cost to British business of continued uncertainty about any form of Brexit, it’s time for MPs to make some consequential decisions about the U.K.’s future relationship with the E.U. 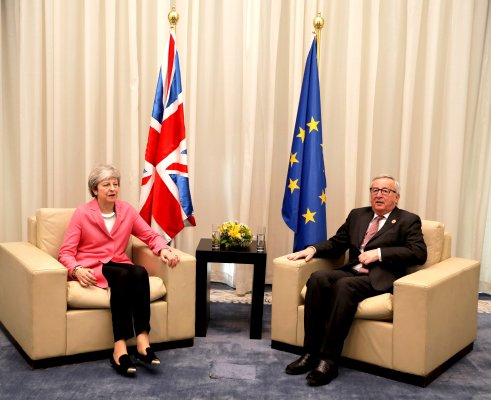