R. Kelly said the women who have accused him of sexual misconduct are liars in his first interview since being charged with 10 counts of sexual abuse last month.

In an interview with CBS’s Gayle King, which aired on CBS This Morning on Wednesday, Kelly grew angry and denied breaking any laws when it comes to his treatment of women, addressing allegations that he had sex with underage women and held women captive. He said the “power of social media” has compelled the multiple women to share stories accusing him of being controlling and abusive.

“I’ve been assassinated,” Kelly said. “I have been buried alive.”

In February, Kelly was indicted on 10 counts of aggravated criminal sexual abuse. Prosecutors allege he sexually abused four victims, at least three of whom were underage, with the accusations stemming from 1998 to 2010. The singer, who was acquitted in 2008 on charges of child pornography, came under renewed scrutiny in January after the docuseries, Surviving R. Kelly, aired on Lifetime, exploring allegations against Kelly that had circulated since the 1990s. Accusers and other former members of Kelly’s inner circle interviewed in the series shared stories about Kelly preying on young women, coercing women into sex with underage girls and taking women captive.

“They are lying on me,” he said after King named a series of women who have spoken out against Kelly. “You can start a rumor on a guy like me or a celebrity just like that. All you have to do is push a button on your phone and say, ‘so and so did this to me, R. Kelly did this to me,’ and if you get any traction from that, if you’re able to write a book from that, if you’re able to get a reality show … then any girl that I had a relationship in the past that it just didn’t work out, she can come and say the exact same thing.”

Asked if he had ever held anybody against their will, Kelly said, “I don’t need to. Why would I? How stupid would it be for R. Kelly, with all I’ve been through in my way, way past, to hold somebody, let alone four, five, six, 50, you said — how stupid would I be to that?”

Kelly, growing emotional, continued to rant. At one point, he stood up in anger and looked directly into the camera.

“Quit playing. I didn’t do this stuff,” he said. “This is not me. I’m fighting for my f-cking life.”

Kelly told King that people are “going back to my past” and are “trying to add all of this new stuff now to that.” He insisted the past allegations were not relevant to the new accusations about his behavior with underage women.

“I beat my case. When you beat something, you beat it,” he said. “You can’t double-jeopardy me like that. You can’t. It’s not fair.”

When King noted that she was referring not to the case where he was acquitted, but to the several other cases where women have accused Kelly of abuse or underage sex, the singer said, “Not true. Whether they’re old rumors, new rumors, future rumors, not true.”

Kelly said he thinks people should still buy his music, but that he’s mostly concerned with continuing to have a relationship with his children. Asked how he would react if one of his daughters accused someone else of doing what Kelly is accused of, the singer said “I would have to arrest myself after I did what I had to do.”

Kelly also addressed his current relationships with Joycelyn Savage, 23, and Azriel Clary, 21. Both women, whose parents believe have been brainwashed by the singer, live with Kelly at his home in Chicago. Savage disputed claims that she was being held against her will in an interview with TMZ in 2017. “I’ve never felt like a hostage or anything like that in that nature,” she said.

King also spoke with Savage and Clary about living with Kelly in another emotional interview. Breaking down in tears, Clary said she was crying “because you guys don’t know the truth.”

“You guys believe in some fucking façade that our parents are saying,” she said. “This is all fucking lies for money. If you can’t see that you’re ignorant and you’re stupid.”

Kelly said of his relationships: “I love ’em. They’re my girlfriends. It’s like, we have a relationship. It’s real.”

The attorney Michael Avenatti, who is representing Clary’s parents, tweeted a statement on behalf of the family on Wednesday morning. “It is pathetic and disgusting that R. Kelly has manipulated these young girls and lied to them about their families,” Avenatti wrote. “It has been his modus operandi for decades and part of his abuse.” 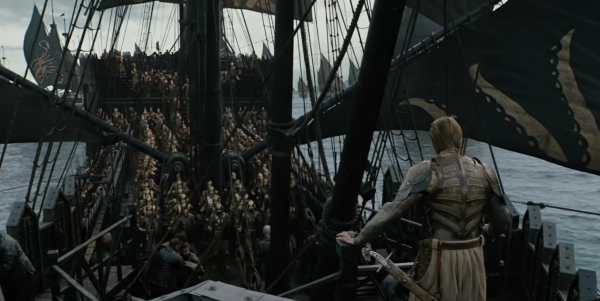 A Mysterious Character in the Game of Thrones Trailer Could Herald a Major Season 8 Twist
Next Up: Editor's Pick