China Prepares for 'Unpredictable' Year Ahead at Subdued Annual Parliament

If last year was the Xi Jinping show, the 2019 National People’s Congress (NPC) — China’s annual rubberstamp parliament — has been all about the economy.

Twelve months have past since Xi’s coronation as China’s most powerful leader since Mao Zedong at last year’s NPC, when presidential term limits were officially scrapped and Xi’s eponymous political thought enshrined in the Chinese Communist Party (CCP) charter. By comparison, this year’s NPC, which opened Tuesday, had a markedly less triumphant feel.

It’s hardly surprising. Growth had slipped to its slowest rate in 28 years while crucial exports have also shrunk. Xi’s signature Belt and Road Initiative — a Beijing-bankrolled trade and infrastructure network tracing the ancient Silk Road — has encountered opposition from Hanoi to Madrid. Governments around the world are raising concern about China’s tech ambitions, particularly security concerns regarding 5G rollout.

Premier Li Keqiang sounded a cautionary note during Tuesday’s Work Report, which forms the NPC’s opening address and is akin to a State of the Union. Next year’s growth forecast would be between 6% and 6.5%, Li revealed, the lowest level since 1990, with Li stressing “graver,” “unpredictable” and “more complex” risks ahead, while steering clear of acknowledging any missteps by the Xi leadership.

“The more pressure Xi is under the less scope he has to acknowledge mistakes,” says Steven Tsang, director of SOAS China Institute.

None of those pressures loom as large as the ongoing trade war with Washington. Li conceded that “trade disputes” had negatively impacted the economy, but insisted that Beijing had “appropriately” handled the situation. Beijing and Washington are close to finalizing a trade deal, according to U.S. President Donald Trump.

“Outside of its own long list of domestic challenges, relations with the U.S. are of paramount concern for Xi Jinping and the Chinese leadership,” says Jude Blanchette, a senior China analyst for Crumpton Group, a business consulting firm.

Tellingly, there was no mention of Made in China 2025 in the 35-page Work Report. The key strategic gambit to dominate certain hi-tech industries — such as aeronautics, Artificial Intelligence and semi-conductor chips — prompted a backlash from Washington, which has suggested it flouts WTO rules.

Li’s omission of Made in China 2025 — which featured in his previous three Work Reports — was probably “a sop to Trump but I can’t imagine Beijing ever abandoning said program’s high-technology objectives,” says Sean King, a former U.S. diplomat and now senior vice-president of political risk firm Park Strategies.

Li also announced a significant 3% cut in VAT for manufacturers to 13%, while VAT for construction and transport companies was trimmed to just 9%, in an attempt to boost private businesses. Local governments will be allowed to issue $320 billion worth of “special purpose” bonds.

But the announcement of tax cuts and infrastructure spending also signifies the government is willing to let its debt mountain — already estimated at three times GDP — grow in a bid to stabilize the economy and head off a possible rise in unemployment.

As a result, “the government’s fiscal position at both the central and local levels will deteriorate, while looser controls over lending to small companies could lead to widening bad debts,” writes Tom Rafferty, principal economist for China for the Economist Intelligence Unit.

Li also announced efforts to improve social services, particularly education and healthcare, which are much maligned and a growing source of popular discontent. The government will incentivize investment in elderly care facilities and nurseries to address the ticking demographic time-bomb of China’s rapidly aging population.

Overall, the NPC is shaping up as an attempt to steady the ship amid disquiet from within the CCP and outside about Xi’s helmsmanship in the face of unprecedented headwinds.

Still, “It’s important that we don’t confuse more outspoken grumbling about Xi’s rule with an actual organized challenge,” says Blanchette, highlighting that his “control over the military and security services still appears firm.” Ultimately, he adds, “It’s time we start imagining Xi ruling China for the next few decades.” 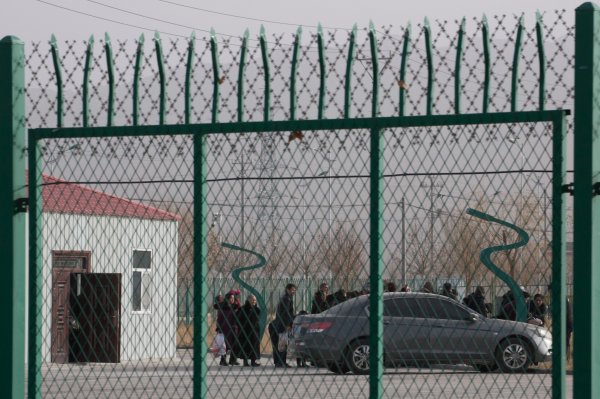 Lawmakers: Trump Admin Must Act on China's Abuse of Muslims
Next Up: Editor's Pick