A Man May Be Cleared of HIV for the Second Time in History. Here's What That Means

A man in London has become only the second person to achieve remission from HIV infection, researchers from the UK reported Tuesday. The therapy responsible has worked on only one other person who is considered to be “cured” of HIV: Timothy Ray Brown, who still does not show signs of the virus in his body after more than 10 years.

Here’s what to know about the landmark case.

How did it happen?

In a letter published in the journal Nature, researchers led by Ravindra Gupta from the University of Cambridge London and Imperial College London and his colleagues say that they used a treatment similar to the one Brown received in 2007, but with a few changes meant to make the therapy easier and less intense for the patient. The London patient, who wishes to remain anonymous, was diagnosed with HIV in 2003 but did not begin anti-HIV drug therapy, which can keep the virus below detectable levels, until 2012. That year, he was also diagnosed with stage 4 Hodgkin’s lymphoma.

To treat his cancer, he received chemotherapy and a bone marrow transplant in 2016; the chemotherapy killed the malignant and healthy cells in his immune system and blood, while the transplant gave him a fresh start with bone marrow cells from a healthy donor, which seeded a new population of cancer-free immune and blood cells. Brown had received two similar transplants to treat his leukemia; his donors were intentionally chosen because they not only matched him, but they also harbored genetic mutations that made their cells nearly impervious to HIV infection. These mutations are in a gene called CCR5, which HIV normally recognizes in immune cells and uses like a key to enter and infect them. But with the mutated CCR5, Brown’s immune cells became molecular fortresses that HIV couldn’t penetrate — which meant the transplant essentially cured him of his infection.

For the London patient, Gupta and his team also found a donor who had these mutations in CCR5. The patient remained on anti-HIV drugs to prevent the virus from replicating for nearly 1.5 years after the transplant; because HIV tends to hide in cells in a dormant phase and reactivate years later, Gupta wanted to be sure that as much of the virus as possible was destroyed with the drugs. Then in 2017, Gupta took the London patient off of the anti-HIV drugs to see if the transplant had worked as it had in Brown’s case: to push the HIV into remission. Indeed, 16 months later, his virus remains at below detectable levels, and his immune cells all contain the HIV-fighting CCR5 mutation.

Does this mean HIV has been cured?

It’s a matter of semantics, says Dr. Steven Deeks, professor of medicine at the University of California, San Francisco and one of the doctors who treated Brown. “Is that a cure? I think so.” He says he believes that some HIV still remains in the London patient’s body, but that because his immune system is now impervious to the virus, the HIV is marooned — like a castaway on a remote island who cannot swim. HIV is at its most dangerous when it is actively replicating, furiously producing as many copies of itself as possible so it can penetrate immune cells and spread infection. That’s when it can also mutate to evade drugs. Because it’s a virus, it can’t replicate on its own, but instead needs to co-opt the machinery of another cell in order to reproduce, so it can only replicate when it infects other cells. But if HIV is surrounded by a sea of CCR5-mutated cells that it can’t exploit, it’s stymied.

“Personally I think there is probably some virus somewhere in the body, but it’s absolutely trapped,” says Deeks. “It may persist there for quite some time, but who cares? It can’t grow, it can’t replicate, it can’t spread — it can’t cause any problems.”

Still, HIV has proven before to be a wily shapeshifter, and except for Brown, people who previously went in remission for various reasons for a year or so have always seen their virus start to replicate again. Even a newborn girl in Mississippi, who was treated with anti-HIV drugs minutes after being born to an HIV-positive mother and remained in remission for about four years without medications, saw her HIV return and needed to go back on drug therapy.

Could the patient’s HIV come back?

Possibly. The London patient’s immune system is now designed to block HIV’s most common path into cells, using the CCR5 receptor. But the virus is clever and comes in another form that can use a different, side entrance into cells through another receptor called CXCR4. HIV can mutate from using CCR5 to relying on CXCR4, but in order to do that, it needs to be actively replicating. For now, experts believe that any remaining HIV in the London patient isn’t able to replicate at the pace it needs to change into a different form.

Yet there may be another reason to be cautious about the London patient’s potential remission. He waited about nine years after being diagnosed with HIV to start anti-HIV drug therapy. Experts now believe that the sooner after infection that treatment starts, the better chance the medications have of hampering the virus and keeping it from hiding and lying dormant in cells. The longer treatment is delayed, the greater the chance that HIV can also mutate to use CXCR4 and CCR5 to infect cells. That means the London patient may have HIV remaining that can use CXCR4 to infect cells, giving the virus a way to start flourishing again.

Can bone marrow transplants eliminate HIV for a large number of people?

Both Brown and the London patient underwent bone marrow transplants because they needed to treat their cancer, not to treat their HIV; and both experienced side effects of rejection at varying levels, since they received cells from an unrelated donor.

Fauci sees the report of the London patient as being less about the possible benefits of bone marrow transplants in treating or even curing HIV, and more about the need to focus HIV research on CCR5. Finding ways to treat people infected with HIV with some infusions of mutated CCR5 cells that block infection seems to make more sense now. These efforts include editing the CCR5 gene in HIV-positive people and giving the genetically edited cells back to them. Scientists have already used the gene editing tool CRISPR to snip out HIV in human cells in the lab, but they are still years away from proving the technology is safe to use in patients.

Still, Fauci is hopeful that such approaches will eventually be available for HIV patients. “So many things have happened that I thought were out of our realm of possibility,” he says. “So while it’s truly aspirational, I wouldn’t say it’s out of the realm of possibility.” Both Brown and the London patient are testament to how effective such strategies in modifying CCR5 can be in thwarting HIV. 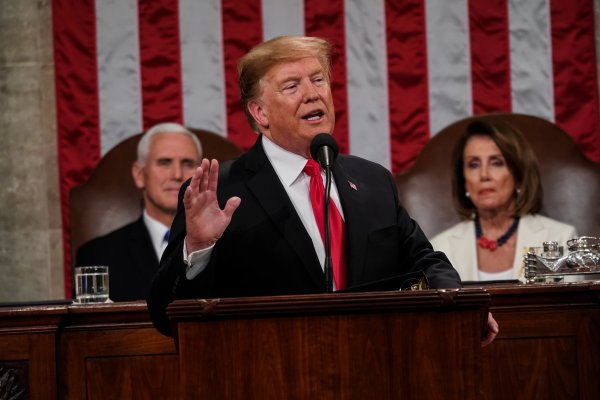 Experts Discuss Trump's Plan to End HIV in 10 Years
Next Up: Editor's Pick