Review: Brie Larson Makes a Fine Captain Marvel—But What Does It Accomplish?

Is anyone else getting tired of role models? I don’t mean real-life people who are doing estimable work every day, like Ruth Bader Ginsburg (although even her recent commodification, through no fault of her own, threatens to flatten some of her dimensions), but virtuous fictional women who are put up before us as a jaunty reminder that “Girls can do anything!” Girls can do anything and, like all children, young girls can have moments of self-doubt, times when they need reassurance. And there’s no reason we shouldn’t be seeing women superheroes on-screen; Lord knows there are enough guys. But the delivery system matters, too. And while we know that little girls (or boys, for that matter) might not rush out to see an earnest biopic of, say, Harriet Tubman, Eleanor Roosevelt or Margaret Sanger, does our sense of the power and capability of women always have to be filtered through a highly fictionalized superhero universe—as if that were the only way we could possibly bring ourselves to register the value of what women can bring to the table? Words like badass and kick-ass, used to describe women, have been trotted out so often that they’ve come to mean nothing. They tell us little about whether a woman has any sense of judgment or style or true intelligence. The idea is that it’s best just to bash your way through everything, just as so many guys do. That way, no one will ever think of you as weak.

If that’s the message du jour, so be it. But it’s also one of the limitations of Captain Marvel. Brie Larson plays the title character who, before she becomes superhero-marvelous, is an Air Force pilot named Carol Danvers. Carol gains superhuman powers after an accident (isn’t that always the way?), though the movie—directed by Anna Boden and Ryan Fleck, best known for their 2006 collaboration Half Nelson—fills in the backstory gradually, in a trickily constructed series of flashbacks. When we first see Larson’s Carol, she appears to have crash-landed in some sandy, forlorn landscape; with her is a woman who appears to be a colleague and mentor—later we’ll find out her name is Dr. Wendy Lawson, and she’s played by Annette Bening.

But we know immediately that there’s something different about Carol, because the blood dripping from her nose is blue. Not long after, we see a different version of her, a warrior in a molded uniform. We learn she is a Kree, part of a race of noble warriors, and her name is Vers, pronounced “Veers.” Vers is being trained in all the usual combat moves and “snatch the pebble from my hand” philosophies by a stern, elegant superior, who goes by the not-so-elegant name Yon-Rogg (Jude Law). The Krees’ biggest enemy? A race of shapeshifters known as the Skrull, led by Talos (Ben Mendelsohn), who hope to take over the whole galaxy, or the solar system, or something.

In pursuit of the Skrull, Vers lands on a strange planet known as C-53, though we immediately recognize it as Earth—specifically Los Angeles—of the 1990s. There, she meets a pre-eyepatch Nick Fury (Samuel L. Jackson, his skin made young and plasticky by what now passes for movie magic) and reconnects with an old Air Force colleague, Maria Rambeau, played by Lashana Lynch, who has some of the finest moments in the film—maybe because she’s entrusted with the job of just being a real person instead of a walking signboard for all womankind’s total, ass-kicking awesomeness. There’s also a wonderful marmalade cat, Goose. He’s played by several real cats and an animatronic one, and he too is best when he’s allowed to do simple cat things, rather than the requisite superhero-cat things.

Captain Marvel is acceptably entertaining, and already it has gotten the kind of inadvertent advance marketing a studio—in this case, Disney—can only hope for. Weeks before its release, Larson’s portrayal of Captain Marvel was attacked by trolls on Rotten Tomatoes who hadn’t even seen the movie. (Their dumb-ass vitriol prompted Rotten Tomatoes to remove, for the first time, the option for users to rate a movie before they’ve even seen it—which doesn’t answer the question of why anyone should ever be allowed to rate a movie he hasn’t seen, but whatever.) When the trailer was released, last fall, similar dudes—or maybe the exact same dudes—complained that Larson’s Captain Marvel didn’t smile enough. That right there is plenty to get you on Captain Marvel’s side automatically, unless you’re a Rotten Tomatoes troll yourself, in which case you probably haven’t read this far—but if you have, congratulations, and welcome to the world of actual reading!

But what kind of world do we live in, where we let the stupidity of trolls rule the subtler aspects of our own judgment? Captain Marvel isn’t a terrible movie. And Larson, a perceptive, low-key actor, carries the whole affair capably; she smiles just the right amount, which is not a lot. But she’s best in the quieter scenes—particularly those with Lynch—the ones where her mighty superhero fists aren’t radiating screaming blue streaks, the ones where she’s watching and listening to the performers around her, her face registering all kinds of emotional shifts. This brings us to the central problem of presenting superhero role models for girls on such a loud, booming canvas: These women are powerful (great!) but they’re rarely shown just being good at the ordinary things—like listening, or rendering thoughtful advice, or admitting they made a mistake—which are the things that make the real-life humans around us truly great.

Larson does get a few opportunities in Captain Marvel to be that regular, flawed-but-strong human—there just aren’t enough of them, and they’re hardly the focus of the movie. Of course, in the broader context of the Marvel Cinematic Universe, this is all just a setup for Captain Marvel’s role in the upcoming Avengers: Endgame. But by the time I got to the end of Captain Marvel—after watching Larson bash her way through phalanxes of wrinkled green aliens with her glowing fists, offer bathroom-mirror Post It-note words of encouragement to a little girl who beams at her adoringly, and hover in the air like Stan Lee’s version of the Blessed Virgin shimmering in the grotto before the future Saint Bernadette—I wasn’t thinking, Wow! Instead, I heard the voice of my own inner superhero, Peggy Lee, whispering in my ear: Is that all there is? The most heinous supervillain of all is Boredom. 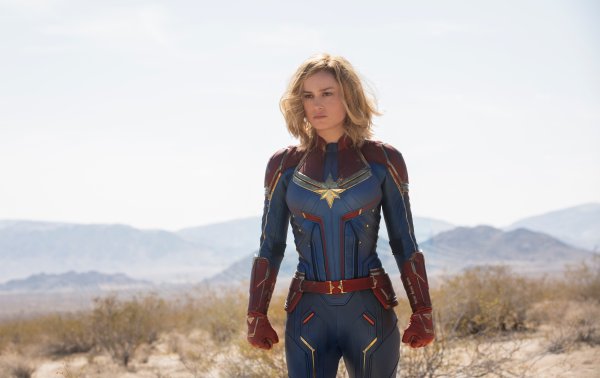 This Is Not Another Story About Captain Marvel's Gender
Next Up: Editor's Pick