U.S. lawmakers have appealed to the Trump Administration to take action against “egregious human rights abuses” in western China, where it is believed that at least one million ethnic Uighur and other minority Muslims are being held in secretive internment camps.

In a letter addressed to Secretary of State Mike Pompeo, the House Committee on Foreign Affairs said Monday that the Administration had taken “no meaningful action” since the body sent a request in August calling for sanctions that would freeze the travel and assets of officials responsible for abuse.

“The United States must stand up for the oppressed and, at every opportunity, make clear to the Chinese government that the situation [in Xinjiang] is a priority for the U.S. Government,” the letter said.

The committee said it received a reply from the State Department in September pledging to look into the request, but that nothing had since been done and the global response to the crisis has to date been “insufficient.”

The letter also called for controls on the export of technology used to both detain and surveil the minority, which resides predominantly in China’s western Xinjiang Province. Recent reports claiming that U.S. companies have contributed to their persecution are of “particular concern,” the letter said.

Lawmakers singled out Chinese tech firms Hikvision and Dahua as having “profited from the surge of security spending in Xinjiang.”

China claims that its policy of sending Muslims to so-called “re-education camps” has been an effective means of preventing homegrown terrorism.

Diplomats from 12 countries were invited to tour a detention center in Xinjiang late last year in the face of mounting international criticism. 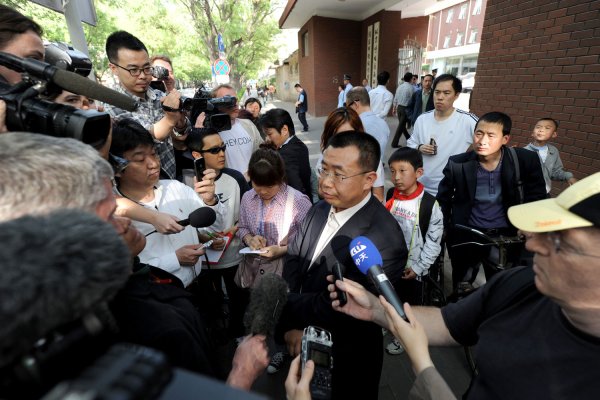 Prominent Chinese Human Rights Lawyer Gets Out of Jail, Goes Missing
Next Up: Editor's Pick