This Is Not Another Story About Captain Marvel's Gender

“You really need to know about the cat?” Brie Larson asks. The cat in question, whose name is Goose, a nod to Tom Cruise’s sidekick in Top Gun, is the constant companion of Larson’s superhero, Captain Marvel, in the upcoming film of the same name. And the thing is, I do need to ask about the cat, because even though it’s animatronic, it’s just so real, with soft fur, beady eyes and whiskers that are a little worse for the wear.

The robotic cat is actually the understudy to four real cats on set, since you can teach each cat only one trick. There’s Reggie, for closeups; Archie, for cuddly shots; Gonzo, who will walk up to your leg and nuzzle it; and Rizzo, the cat who claws at your face. (Rizzo was, perhaps unsurprisingly, the least popular feline on set.)

We’re on the set of the 21st Marvel Studios movie — the last one before Avengers: Endgame blows up the entire franchise. It’s June and 94°F in this sugarcane field two hours outside of New Orleans. There’s no air-conditioning inside the bungalow where the actors are shooting their scenes, so in between takes they take refuge in SUVs left running with the AC blasting parked beneath the shade of a willow tree. Earlier in the afternoon, the producers had to shoo away a poisonous snake from set.

So fine, I won’t keep asking about the cat, though I feel vindicated six months later when I see Goose has gotten his own movie poster. Some fans are even theorizing that the cat will save the universe when Endgame hits theaters a few weeks after Captain Marvel.

The last Avengers movie, Avengers: Infinity War, ended with a giant purple antagonist named Thanos harnessing the power of something called the Infinity Gauntlet to make his supervillain dream a reality. With a snap of his fingers, he makes half of humanity — and half of the Avengers cast — disintegrate, but not before Samuel L. Jackson’s Agent Nick Fury whips out a ’90s-style pager and sends a message to Captain Marvel.

She’s arriving just in time — both for the heroes and for the Marvel Cinematic Universe, which has grossed nearly $18 billion at the global box office, and yet has never made a film led by a solo female protagonist. Even after the blockbuster success of DC Comics’ Wonder Woman, which took in over $800 million, misogynistic trolls still target female-fronted superhero movies — a point of concern for industry prognosticators who worry men don’t want to see women kick ass.

Captain Marvel is strong enough to take them on. Touted as the most powerful superhero yet, Captain Marvel debuts in her own film on March 8 and then will most likely swoop in to save the Avengers in Endgame on April 26. But first we have to meet her: After all, every hero has an origin story.

She was born Carol Danvers, a fighter pilot who received alien powers during a mysterious accident. That incident also wiped all her memories of life on earth. In her movie, she must travel back to her home planet to uncover the secret of how she became Captain Marvel, toggling between her more logical alien identity and her human instincts. “That’s when Carol becomes herself,” says Anna Boden, who co-directs the film with Ryan Fleck. “When she embraces her humanity, flaws and all.”

She’ll do so with the help of Jackson’s Nick Fury. Jackson is an old pro at this: He will have starred in a whopping 11 Marvel films as an eyepatch–wearing government agent by the end of the summer. The film is set in the ’90s, before the character lost an eye, so in addition to having full use of his faculties, Jackson is wearing a wig, and his face is covered in dots that will de-age him in post-production so he’ll look like he just walked off the set of Die Hard.

But Fury’s makeup is nothing compared to that of Ben Mendelsohn, who plays a shape-shifting alien and the film’s villain. On set the Australian actor, who has made a career playing villains in blockbusters, is lounging on a bench, waving off a production assistant who’s fretting over his alien makeup possibly melting in the oppressive heat. He stays in character for our interview. “Captain Marvel? She’s a bit of a problem for me,” he says, a cigarette dangling from his painted green lips. “Those jazz hands of hers can really do some damage.”

The combination of a cat sidekick, a morphing alien and a superhero who can shoot beams out of her hands might sound wacky. But it’s part of a Marvel machine that’s almost certainly too big to fail. The challenge now is keeping the focus on the movie — not on the gender of its hero.

Captain Marvel wasn’t the obvious choice for Marvel’s first solo female superhero, since she’s a relative unknown outside the comic-book world. She doesn’t have the name recognition of Spider-Woman or Storm. In the comics, Carol Danvers spent decades as Ms. Marvel after gaining her powers, a conscious nod to Ms. magazine. In the ’70s, the character even left a job at NASA to run a feminist publication called Woman while wearing Gloria Steinem–inspired scarves. (Paradoxically, she spent her nights fighting crime in a getup that was basically a bathing suit.)

Carol got a much-needed promotion from Ms. Marvel to Captain Marvel in 2012 with the help of comic-book writer Kelly Sue DeConnick, who once distilled her philosophy about writing female characters to me thusly: “If you can take out your female character and replace her with a sexy lamp and your plot still functions, you’re doing it wrong.” Carol Danvers got a new military look, shorter hair, and the sort of narcissistic swagger that has long been carried by men like Robert Downey Jr. but women are rarely allowed to own.

It’s this version of Danvers that’s made its way to the big screen. Back on set, Larson assures me, “If they had presented me with a leotard, I would have walked out of the building.” Even out of uniform, she has a less feminine look than most female superheroes. Channeling Winona Ryder’s and Kate Moss’ androgynous looks from the ’90s, the costume designer has fitted her with a Nine Inch Nails T-shirt and an oversize black leather jacket.

Wonder Woman may have beaten Captain Marvel to theaters, but this new movie isn’t a copycat. Captain Marvel doesn’t wear a skirt. She’s cocky and pugnacious, not naive. Instead of a love interest, she’s got a best friend, fellow pilot Maria Rambeau. “We’ve moved past that moment in the culture where one woman in every film represents female strength,” says Lashana Lynch, who plays Maria. “We’ve come far enough to show women supporting each other.”

And Carol isn’t concerned with making her male fans feel comfortable, a point of contention among viewers who complained that the character doesn’t smile enough when the first trailer dropped. Captain Marvel exemplifies a completely different kind of female strength, one that some men may find more threatening. There’s been such a push by trolls online to drag down the Rotten Tomatoes score of the movie and ruin its odds at the box office that the review aggregator removed the option for fans to rate films before they’ve been released — a first in the site’s history.

Eight months before any of this so-called controversy arises, Larson is already exhausted just by the prospect of it. She’s had an enviable career as an indie actor, and won an Oscar for the 2015 film Room, but her small films were never the subject of such scrutiny. She’s an outspoken feminist, and she knows taking on the Captain Marvel mantle would allow her to send an empowering message to a larger audience. But she’s sick of the narrative. “I don’t feel any pressure at all to represent my gender,” she says. “That shouldn’t even be a factor. It’s just a movie.”

But how, I ask, do you reconcile the two sentiments: that this is just a popcorn flick, and that it is something that can change the culture, the way other superhero films like Black Panther and Wonder Woman did? This question rouses the generally quiet Jackson from his wicker chair.

“You see a movie with a powerful woman in it, and you realize that you are powerful too. Or you look up and somebody that was 28-year-old nobody beats some guy who’s been in Congress for 10 f-cking years, and that means there’s hope,” he says, referring to the then-recent surprise victory of Alexandria Ocasio-Cortez in the democratic primary in New York.

“No matter how hard the Good Ol’ Boy network tries to convince you that they have all the power, there’s always resistance. I try to teach my daughter that.” He turns to Larson. “I see it in you.” But then the two get called back on set: Gonzo the cat is ready for the next shot.

Captain Marvel will surely inspire little girls across the world to feel powerful. But I share Larson’s hope that soon we reach a place where we can appreciate the movie for what it is: a blockbuster in which the fate of the world may hinge on a cat. 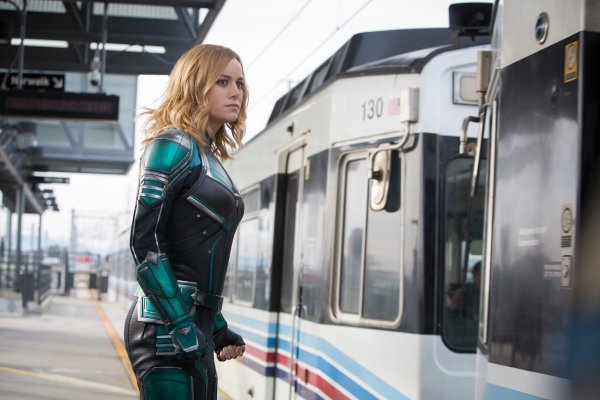 How Captain Marvel Is Breaking the Mold For Superheroes
Next Up: Editor's Pick