Wildfires, Flooding and Droughts Could Make Climate Change an Issue in 2020. Some Are Pushing for It to Be the Top One

For years, climate change has been the also-ran of presidential campaign issues, even as the threat has become steadily more serious. Vice President Al Gore, who spent the previous decade calling for action, didn’t center his campaign around the issue during his run in 2000. Barack Obama and John McCain both talked about fighting climate change in 2008, but global warming was dwarfed as an issue by Iraq and the economy. And in 2016, Hillary Clinton and Donald Trump did not receive a single question on the issue over the course of three debates.

Now, activists, environmentalists and some politicians think the dynamic has shifted, in part because voters are starting to see the effects of climate change in real time.

Wildfires are ravaging California, heavy rain is flooding communities across the country and drought has killed off crops in the heartland. Meantime, President Donald Trump, who once called climate change a hoax perpetrated by the Chinese, has galvanized Democrats and suburban moderates who are worried about his Administration’s rolling back of efforts to fight it, which has left the U.S. the only country opposed to the Paris Agreement on climate change.

But those on the front lines of climate change politics say it’s no longer enough for it to be just one of several top issues. With time running out to cut greenhouse gases in order to stave off the worst-case scenarios, they say presidential contenders need to commit to making it their No. 1 issue when they take office.

“You need to hear from the candidates that this is going to be a priority from day one,” says Christy Goldfuss, who chaired President Obama’s Council on Environmental Quality and is now a senior vice president at the Center for American Progress, adding that candidates need to acknowledge that they are willing “to use all aspects of the government.”

With the 2020 election more than 600 days away, several key players are working to push climate change to the top of the agenda, at least for the Democratic nominee. Freshman Rep. Alexandria Ocasio-Cortez of New York and veteran Sen. Ed Markey of Massachusetts put forward a broad outline of a Green New Deal which calls for the U.S. to decarbonize by 2030 — an aggressive goal that could require trillions of dollars in investment. (Supporters argue the costs of inaction would be far higher.)

Many of the best-known Democratic presidential candidates have endorsed the Green New Deal resolution, but it remains unclear to what extent they are committed to all of its parts. Minnesota Sen. Amy Klobuchar of Minnesota, for example, endorsed a Green New Deal but suggested that she might not support every plank, instead calling it “a framework for discussion.” And former Texas Rep. Beto O’Rourke, who is widely expected to run for president, said in January that he is “supportive of the concept.”

While it’s too early in the campaign to ding candidates for lacking detailed plans, many seem more animated by kitchen table issues like health care and economic inequality. That’s understandable given that most of them cut their teeth as politicians in an era when climate change ranked low on the list of voter priorities, but activists say the urgency of climate change makes such a posture unacceptable.

Washington Gov. Jay Inslee, a former member of Congress who entered the Democratic presidential primary last week, has taken a different tack, building his entire candidacy around the issue. He told TIME that he wants his run and potential presidency to serve as a “bugle call” to activate American ingenuity that will drive economic prosperity. It may have already helped raise his profile, at least, as he says he raised more than $1 million since launching his campaign despite a low national profile.

Former New York City Mayor Michael Bloomberg, an outspoken advocate for action on climate change, said Tuesday that he would not run for president, but he doubled down on his commitment to fund candidates with strong positions on the issue.

“The public is looking to their Democratic leaders for leadership,” says Sen. Sheldon Whitehouse, a Rhode Island Democrat who has pushed for climate change measures in the Senate. “You can get into a vicious cycle when Democratic leaders see climate as a No. 7 issue in the minds of the public, and so we don’t talk about it, and it stays a No. 7 issue.”

A landmark report from the Intergovernmental Panel on Climate Change (IPCC), the United Nations climate science body, shows the world needs to cut greenhouse gas emissions in half by 2030 to keep temperatures from rising more than 1.5°C by 2100, a level the agency warns will kill off the world’s reefs and unleash mass climate-related migration, among a slew of other challenges. Meeting that goal is difficult already and will grow more difficult with every passing year.

And then there’s the political urgency. If history is any guide, the next president is likely to have one shot at passing big legislation before the politics of the midterm elections take over. Climate change could easily fall to the wayside if it’s a second or third priority for the next president, as happened under Obama’s first term.

That’s where the activists come in. A group of young progressives has pushed their elected officials to prioritize climate change and endorse bold solutions. Most notably, the Sunrise Movement, an activist group led by young people, has hosted sit-ins in lawmakers offices and kept the issue in the media’s eye. “We’re pushing folks not just to pay lip service to the Green New Deal or use it as a sexy buzzword but to put some actual substance behind,” says Varshini Prakash, Sunrise’s executive director. The activists want to “ensure that the Green New Deal remains at the top of conversation.”

To President Trump and many conservatives, the activists are easy fodder for ridicule and help rally the Republican base against “big government.” But Democratic presidential candidates take the protesters seriously. On a recent Wednesday morning, activists from Sunrise toured the Washington offices of Democratic senators running for president. Grinning receptionists and staffers eager to pitch the activists on their boss’s credentials met the activists as they sang and chanted in their offices. (That’s a sharp contrast from their visits to Republican Senate Majority Leader Mitch McConnell and Speaker of the House Nancy Pelosi’s offices, where their pleas were met with arrests).

And, while national polls may not seem to favor the climate discussion, the Democratic primary is a different beast. A February poll from the Center for American Progress shows that Democratic primary voters in five early voting states see climate change as a top issue alongside health care. And a poll from Yale Climate Communications showed that voters who identify as liberal Democrats ranked climate change fourth out of 28 issues ahead of the midterm elections.

The Sunrise activists say that talking about the Green New Deal helps voters understand climate change as a kitchen table issue, too, as a warming planet exacerbates issues like unemployment and poverty. “We’re actually talking about the real life issues that Americans are facing,” says Prakash.

Ultimately, though, as the effects of climate change grow more severe, the warming planet will push its own messaging. The urgency of global warming is much easier to understand when your backyard is on fire or you’re wading through your neighborhood. And that may be what it takes for people to vote on it. 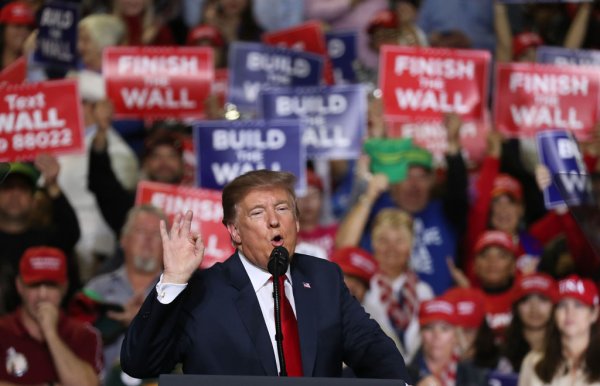 The Real Culprit Behind Trump's Border Emergency? Climate Change
Next Up: Editor's Pick