Move over, MacGuyver: some quick-thinking teens are being hailed as heroes for rescuing an 8-year-old boy who was dangling from a chairlift at a Vancouver ski resort using an unlikely assortment of items.

The nightmarish scenario unfolded when the child was riding a chairlift at Grouse Mountain and somehow slipped from his seat. His father’s hand was the only thing holding the boy up as he dangled “20 or 25 feet in the air” over the mountain, Canada’s Global News reports. That’s when a group of five teenagers jumped into action

After seeing the dire situation, one teen asked a grownup to go fetch the orange netting that the resort used to mark the ski resort’s off-limits area. The teens pulled padding from a pole and lined the net to make a soft cushion so the boy could land safely as they held the net taut. While they worked, another teenager tried to keep the boy calm as he dangled off the chairlift as panicking could have hastened his fall.

Once the net and padding were set, the teens and two nearby adults got into place, pulling the make-do safety net tight. That’s when the teen heroes told the youngster to take off his skis and managed to convince the boy’s father to let go. The father decided to trust that their idea would work, and let go of his child. The bet paid off and the boy dropped safely into the net. The child was taken to the hospital as a precaution, but according to Global News, was more than fine, as he was reportedly skiing later that afternoon.

The president of Grouse Mountain executives met with the heroic rescuers to thank the five teenagers and two adults for their quick action, and according to a follow-up story from Global News rewarded them with “Grouse Hero” passes, a complimentary season’s pass for next year as well as sweaters and hats. MacGuyver would be jealous. 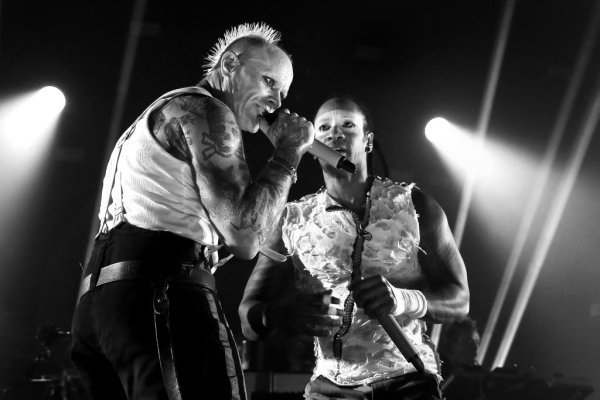 A Mom Who Accidentally Gave Birth to Prodigy's 'Firestarter' Pays Tribute to Keith Flint
Next Up: Editor's Pick