Pope Francis announced Monday that the Vatican’s archives on controversial World War II-era pope Pius XII would be opened up eight years earlier than planned, in 2020, a move seen as an olive branch to Jews who have criticized the Vatican for not doing enough during the Holocaust.

“The church is not afraid of history,” Pope Francis said, announcing the move in a speech to members of the Vatican’s Secret Archives. “On the contrary, it loves it, and would like to love it even more, like it loves God.”

Papal archives are usually opened to historians 70 years after the end of a pope’s rule, but the Church has come under pressure to reveal Pius XII’s records earlier than that, while aging Holocaust survivors are still alive.

Many Jewish groups have been calling on the Vatican to open the archives for decades. Rabbi David Rosen, of the American Jewish Committee, welcomed the news, telling Reuters it would help historians to “acknowledge both the failures as well as the valiant efforts made” during the Holocaust.

The Catholic Church has said Pius, who was pope from 1939 until his death in 1958, worked quietly to save Jews during the Holocaust, while remaining tight-lipped to protect Catholics in Nazi-occupied countries.

Indicating he agreed with that line, Pope Francis said Monday that the Pius papacy included “moments of grave difficulties, tormented decisions of human and Christian prudence, that to some could appear as reticence,” but hinted that the documents included evidence of attempts “to keep lit, in the darkest and cruelest periods, the flame of humanitarian initiatives, of hidden but active diplomacy.”

Historians will be able to judge those claims against the archival record beginning on March 2, 2020, when the church now plans to unseal the documents.

In 2014, Francis said “I don’t want to say that Pius XII did not make any mistakes — I myself make many — but one needs to see his role in the context of the time … for example, was it better for him not to speak so that more Jews would not be killed or for him to speak.”

The documents will not be open to the public, however. Researchers must hold a university degree from a five-year course, and permission must be sought from the head of the archives in a letter laying out the “reasons for the research,” according to Vatican News. 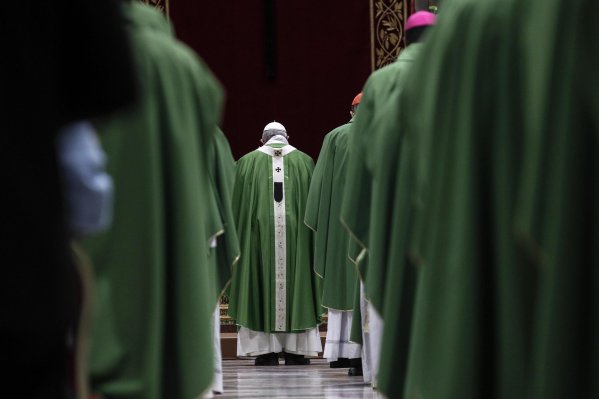 Why the Pope's Summit on Abuse Disappointed Some Survivors
Next Up: Editor's Pick