Republican Senator Rand Paul of Kentucky said he’ll vote to block President Donald Trump’s declaration of a national emergency on the U.S.-Mexico border, a move that’s likely to provide enough votes for the measure to pass the Senate and draw Trump’s first veto.

“I can’t vote to give the president the power to spend money that hasn’t been appropriated by Congress,” Paul said in a speech during the Southern Kentucky Lincoln Day Dinner on Saturday, the Bowling Green Daily News reported on its website.

Paul said of Trump’s Feb. 15 declaration, which the president said allows him to take billions of dollars from other parts of the budget to use for a border wall, “We may want more money for border security, but Congress didn’t authorize it. If we take away those checks and balances, it’s a dangerous thing.”

The House voted Feb. 26 to block the emergency declaration, but without enough votes to override a promised presidential veto. Only 13 Republicans joined all Democrats in backing the measure. The Senate has 18 calendar days from that date to consider the House measure or act on its own version.

The measure needs a simple majority to be adopted and sent to Trump’s desk, but is also unlikely to attract support from a veto-proof majority in Senate.

In addition to Paul, three other Republican senators have said they’ll vote with Senate Democrats on a resolution terminating the declaration — Lisa Murkowski of Alaska, Thom Tillis of North Carolina, and Susan Collins of Maine. With all members of the Democratic caucus apparently backing the resolution, that should be enough votes for the GOP-controlled chamber to reject the president’s action.

While a veto by Trump would be on track to be sustained, the legality of Trump’s action will also be fought out in the courts.

After a 35-day government shutdown, precipitated by a partisan fight over border security, Trump agreed to sign a bipartisan spending bill that provided $1.4 billion for physical barriers on the border — far short of what he was demanding. At the same time, he signed an emergency declaration to shift $3.5 billion from military construction accounts to the border wall. 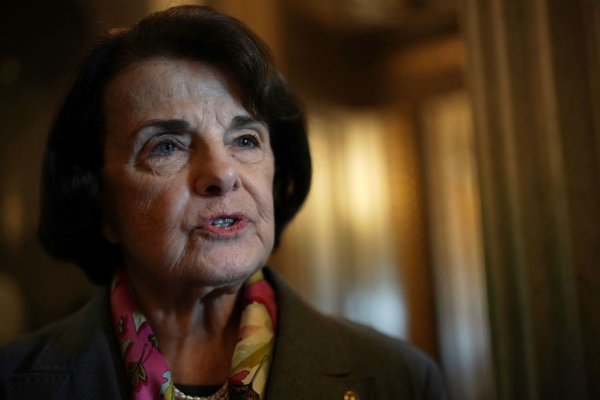 Feinstein Spars With Kids Who Support Green New Deal
Next Up: Editor's Pick