'Kim and His Evil Regime Are Responsible.' Otto Warmbier's Parents Speak Out After President Trump's Defense of Kim Jong Un

The parents of Otto Warmbier, the U.S. citizen who died in 2017 after being imprisoned by North Korea, issued a stinging rebuke Friday after President Donald Trump’s defense of dictator Kim Jong Un.

Their statement came one day after Trump’s summit with Kim in Vietnam. In response to a question at a press conference, Trump said he believed Kim when the North Korean leader said he knew nothing about Warmbier’s imprisonment.

“He tells me that he didn’t know about it and I will take him at his word,” Trump said. Kim “felt badly about it,” he added. “He felt very badly.”

Trump responded to the Warmbiers’ criticism on Friday afternoon, saying his comments had been “misinterpreted.”

“Of course I hold North Korea responsible for Otto’s mistreatment and death. Most important, Otto Warmbier will not have died in vain,” Trump tweeted. “Otto and his family have become a tremendous symbol of strong passion and strength, which will last for many years into the future. I love Otto and think of him often!”

Warmbier was arrested in 2016 for allegedly stealing a propaganda banner while on a trip to North Korea. He was sentenced to 15 years of hard labor, but entered a coma in unspecified circumstances shortly afterwards. He was released in 2017 and sent back to the U.S., but died just days later.

Fred Warmbier described his son’s condition upon his return to the U.S. “He was blind, he was deaf,” he said. He was “jerking violently making these inhuman sounds.”

Trump suggested at the summit that Warmbier’s fate could have been due to North Korea’s prison conditions, rather than the personal fault of Kim. “Those prisons are rough – they’re rough places, and bad things happen,” he said.

Human rights groups have criticized Trump’s failure criticize Kim on his country’s abuse of its population, with Amnesty International saying Trump “gave Kim a platform on the world stage only to showcase his own disdain for human rights.” 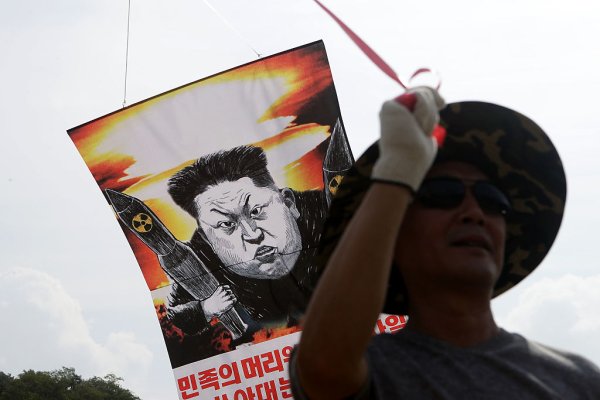 Trump Smiling With Kim Jong Un on the World Stage Shows His Disdain for Human Rights
Next Up: Editor's Pick