Justin Trudeau’s ship may be sinking, but he’s not changing course.

The Canadian prime minister plowed ahead Thursday after his former attorney general alleged, in explosive testimony aired on national television, that he interfered in the justice system by pressing to end a criminal case against an iconic Quebec construction firm. Speaking to reporters in Montreal, Trudeau insisted again his government had every right to consider the job losses that could result from a guilty verdict for SNC-Lavalin Group Inc.

The scandal has suddenly made Trudeau vulnerable, consuming his Liberals in the run-up to an election in which he’d have otherwise have been the frontrunner. He’s lost his polling lead for the first time since June, and the controversy has undermined his personal brand as a progressive leader who singlehandedly returned his moribund party to power in 2015 on a pledge of change.

“It’s very damaging and it’s very serious,” said Penny Collenette, a University of Ottawa professor who served as director of appointments under a former Liberal prime minister. Every politician wants to protect jobs, she said. “But I think the question that needs to be asked here is: at what cost?”

Trudeau’s fate depends on several factors — including whether cabinet stands by him and the Liberals stay united. Only a handful of lawmakers have voiced any measure of support for Jody Wilson-Raybould, who quit cabinet last month but remains a Liberal member of parliament. The prime minister hasn’t decided yet whether to force her out of the party’s caucus.

Any divisions within his government on the matter could be fatal for efforts to convince voters the Liberals have done nothing wrong, said Nik Nanos, a pollster with Nanos Research Group. Trudeau, at the center of the crisis and with his own popularity waning, will also need a more team-oriented campaign in the next election to win voters who may blame him for the current crisis.

“If a narrative emerges that the caucus is divided on this, that will be lethal for Justin Trudeau,” Nanos said in a telephone interview. “I can’t remember any party leader winning an election with his caucus divided. If the caucus can’t even agree, how is it that they can govern?”

The latest polls already show the Liberals have lost their lead in voting intentions. An aggregate of public opinion surveys maintained by the Canadian Broadcasting Corp. shows Trudeau’s team with 33.9 percent of the vote, below the Conservatives with 35.8 percent.

What’s hurting the prime minister is the extraordinary spectacle of a former high-ranking member of his government now emerging as its most powerful critic — and his rivals smell blood. Conservative Leader Andrew Scheer called for Trudeau’s resignation and wrote the Royal Canadian Mounted Police seeking an investigation. The police force hasn’t said whether or not it will look into the matter. New Democratic Party Leader Jagmeet Singh is demanding a public inquiry.

Among those Wilson-Raybould accused of improper pressure is Bill Morneau, who she said she spoke to in the House of Commons. The finance minister said Thursday it was Wilson-Raybould who approached him, and defended the actions of his chief of staff, Ben Chin, in stressing the magnitude of potential job losses at the company.

“My role is, and continues to be, to think about how protect Canadian jobs,” Morneau told reporters in Toronto. “I will continue do that. I think that’s critically important for us to understand in every decision we take as a government.”

Wilson-Raybould also took aim at Gerald Butts, Trudeau’s former principal secretary, who on Thursday asked to be allowed to speak to a committee of lawmakers to tell his version of events. The former attorney general — whose absence from cabinet will be filled in a shuffle Friday, according to CBC — may also end up testifying again.

But no current minister has broken ranks. Foreign Minister Chrystia Freeland told the CBC she couldn’t imagine Trudeau applying inappropriate pressure, and signaled frustration that Wilson-Raybould was now taking aim at cabinet. “At the end of the day, when you leave the room, you have to play as a united team,” Freeland said.

Infrastructure Minister Francois-Philippe Champagne said he believes Trudeau was within the “box of what’s legal” with his actions, and that no one should jump to conclusions. “We should take the time to listen to the other witnesses.” Champagne and another minister, border security chief Bill Blair, each brushed aside a question on whether Trudeau should replace key staff. “I remain very confident in the work of this government,” Blair said.

Parliament adjourns on Friday for a two-week break, due to return in time for Morneau’s March 19 budget. The path of the scandal could also depend on what Liberal lawmakers hear while away from Ottawa, in their home districts scattered across Canada.

“They’re going to get earfuls,” Collenette said. “If the truth is really two perceptions, then voters will make up their minds. But they need facts.” 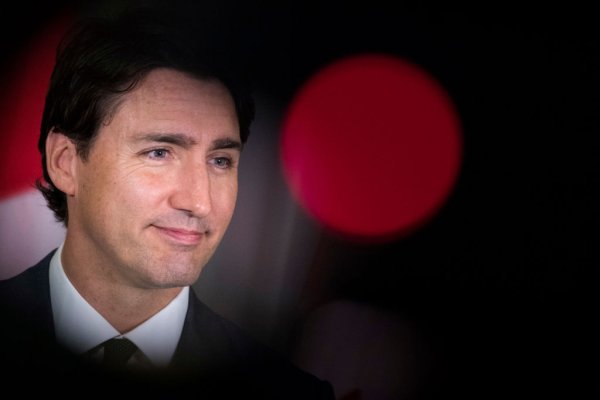 Justin Trudeau Faces His Most Explosive Crisis Yet
Next Up: Editor's Pick