Beto O’Rourke, the Texas Democrat who narrowly lost a U.S. Senate election to Ted Cruz in November, announced he was running for President in a video posted online on Thursday.

“I’m running to serve you as the next President of the United States of America,” he said. On the same day, O’Rourke embarked on a road trip across Iowa — an early and important caucus state — spanning three days and more than a dozen counties.

“This is going to be a positive campaign that seeks to bring out the very best from every single one of us,” he said, shown in the video sitting beside his wife Amy. “That seeks to unite a very divided country.”

The 46-year-old served three terms in the House of Representatives after defeating eight-term incumbent Silvestre Reyes in the 2012 Democratic primary. Before the upset, O’Rourke was an El Paso city councilman, member of a punk band and the founder of a small web and software company. He graduated from Columbia University with a bachelor’s degree in English literature.

O’Rourke’s decision to run for President is not a surprise to those who have been following him. In late February, he said he and his wife had “made a decision about how we can best serve our country” and were “excited to share it with everyone soon.” Though, running for President was not the only path people thought he might take: some predicted he might try to run for the Senate again, this time against Republican John Cornyn. Others thought he might try join an existing ticket as a vice presidential running mate.

Not all too dissimilar from former President Barack Obama, the Texan gained national name recognition relatively quickly. He raised an eye-popping $80 million over the course of his 2018 campaign — more than double that of his Republican opponent, Sen. Ted Cruz.

In that race, he campaigned on a platform that included increased background checks for gun sales, expanded Medicaid access and instituting congressional term limits. Cruz ultimately beat O’Rourke by less than than 3%, but the race was close in a state that hasn’t elected a Democrat statewide since 1994. By comparison, Cruz won his last Senate election by more than 15% in 2012.

He’s not without controversy, however. In 1998, O’Rourke was arrested for crashing a vehicle while under the influence of alcohol. The charges were dismissed after he completed a court-ordered educational program. He’s emphatically apologized for the indiscretion since, calling it a “serious mistake for which there is no excuse” in an August 2018 op-ed.

But O’Rourke, a father of three, has also been criticized for the soul-searching journey he took after his 2018 loss.

“Have been stuck lately. In and out of a funk,” he wrote in a blog post on Medium. “Maybe if I get moving, on the road, meet people, learn about what’s going on where they live, have some adventure, go where I don’t know and I’m not known, it’ll clear my head, reset, I’ll think new thoughts, break out of the loops I’ve been stuck in.

Not everybody thought his public musings would have been perceived the same had he not been a white male.

“Imagine this,” wrote senior CNN political reporter Nia-Malika Henderson in January, “a 46-year-old former congresswoman and mother of three, who just lost a Senate bid to one of the most despised incumbents, sets off on a road trip adventure to clear her head. She instagrams part of her trip to the dentist. She gives a two-hour interview to The Washington Post where she shows no real knowledge of policy. Like a first-year college student, she pontificates on whether the Constitution is still a thing that matters after all these many years,” she continued.

Regardless of impressions, however, the odds have never been more stacked against him.

When TIME profiled O’Rourke in May 2018, a friend of his told TIME that “no one thought he could win” back in his first congressional race. “But he’ll out-work anyone,” that friend said.

With a huge Democratic playing field and roughly 600 days until the 2020 election, now that claim will really be put to the test. 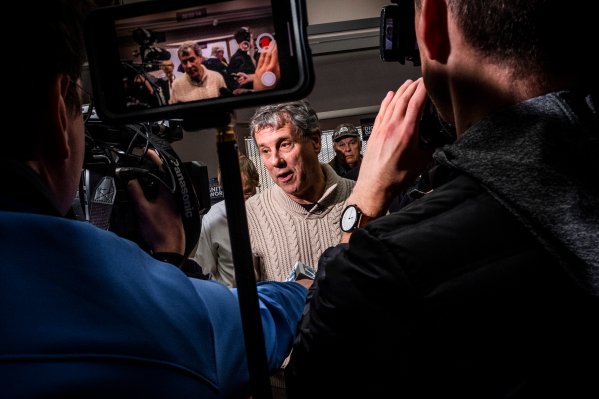 Why Sherrod Brown Decided Not to Run For President
Next Up: Editor's Pick