The Real Military Program That Inspired Top Gun Just Turned 50. Here's How Being a Navy Pilot Has Changed Since Then

Actor Tom Cruise on the set of Top Gun, directed by Tony Scott.
Pictures/Sunset Boulevard/Corbis—Getty Images
By Olivia B. Waxman

The Naval Strike and Air Warfare Center at Naval Air Station Fallon in Nevada is most famous for its connection with the 1986 movie Top Gun. Its TOPGUN program — which turned 50 on March 3 — went by that nickname long before the movie, which was made with the cooperation of the military, introduced the terminology to the wider public. The movie was a hit, prompting a surge in real-life recruiting as well as interest in a sequel (which was supposed to come out this summer, but is now not expected to hit theaters until the summer of 2020). And the school is still teaching American pilots to fly.

Originally called the United States Navy Fighter Weapons School, it was founded after a 1968 study determined that U.S. pilots needed better training, with the intention of changing the way those pilots flew and fought. And that it did, says Capt. Dan Pedersen, who is considered the “godfather” of TOPGUN for helping start the program. With his new memoir TOPGUN: An American Story out Tuesday, he spoke to TIME about the history of the program and how true to life the movie really is.

TIME: How were you involved in the founding of TOPGUN?

Pedersen: We were losing a lot of great talent in Vietnam. When I was on the USS Enterprise in 1967, we lost 11 guys in 17 days. We were getting two enemies, North Vietnamese, for every one of us that was shot down out there. Captain Frank Ault wrote a report and one of his recommendations was that they started a graduate-level school to better train pilots. So I was sent to Naval Air Station Miramar, and I recruited eight other guys to help start the program. I was 32, and the youngest of the nine was 22.

What’s an example of the kind of key changes in tactic that were taught there?

MiGs [Soviet planes] had a better turn rate, so it could get around you and shoot you down. Phantoms had great power, so we could out-fly the MiGs in terms of speed. So we decided to go straight up, go above them and fly down to a perfect position behind the MiG, and go for a tail shot. Then with tactics like that, we were getting 24 of the enemies for every one of us.

What did you like about the movie Top Gun?

The movie was 55% percent positive. The flying was superb, probably someone of the best camera photography of tactical airplanes that’s ever been done. Kelly McGillis’ character was based on a real advisor to the admiral at Miramar. She was very well thought of and went on to be the acting Deputy Defense Secretary. The academies had more people applying [after the movie came out]. If it keeps the Navy recruiters busy, I’m all for it.

It created a false public impression of what it really took and the price we paid. My guys were far more serious and cerebral than the guys in the film because there was a war going on. We actually worked seven days a week probably, starting at 4:30 in the morning. On Fridays, I let the youngest guys who lived in La Jolla out early, so they could party — that’s what young guys are supposed to do — but most of us never got home during the week. I spent many nights sleeping in my car.

[The movie] created some animosity within the Navy by making it seem like it was a golden thing to be a fighter pilot. What about the guys who weren’t flying fighters? I also didn’t care for the open competition between the guys in the movie. It’s the best brotherhood you’d ever want to be a part of. There was no beach volleyball, but we played racquetball to get rid of the stress four or five times a week.

How has being Navy pilot today changed since you started TOPGUN 50 years ago?

A lot of pilots are getting out and going to work for an airline, where they can make make two or three times the money and go home to see their family. The people at TOPGUN ought to be given more of an advisory role in the acquisition of new hardware and weapons. You don’t need politicians in Washington or civil-service people [deciding] what you’re going to fight the war with. They get too caught up with new weapons and systems that are so expensive. Then the pilots are overwhelmed with things they don’t need in the airplane. All it takes is a single bullet in the right place to do you in. 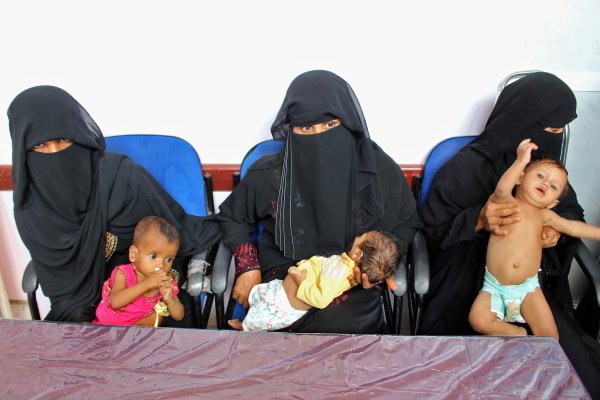 More Children Than Fighters Have Died in War Zones, Report Finds
Next Up: Editor's Pick