Thanks to the popularity of famous tidying-up guru Marie Kondo’s Netflix show Tidying Up, a number of businesses — from Goodwill to online resellers like thredUP and Poshmark — say they’re seeing boosts as Americans seek to slim down their wardrobes in the quest to spark joy.

In January, Kondo followed up her best-selling book The Life-Changing Magic of Tidying Up with the release of a reality series on Netflix. That show has provided further inspiration to clean out the closet. Or at least, that’s what the numbers posted by resellers and their anecdotal evidence conclude.

“The Marie Kondo effect is definitely having a moment,” a representative for online resale marketplace Poshmark told TIME, reporting a 64% increase in listings compared to 2018. Similarly, thredUP saw a huge shift: they shared with TIME an 80% uptick in orders of their “clean out” bags, where users can deposit whatever they don’t want to keep around and send back to the company, which helps list and sell on your behalf. They also had a nearly 50% increase in site traffic after the first of the year when the Kondo show premiered, and in a survey of over 1,000 customers, more than 60% reported that Kondo’s Netflix show was an inspiration for their cleaning.

“Everybody has sort of gotten on the bandwagon, and all sites are benefitting,” thredUP CEO James Reinhart noted to Yahoo! Finance earlier this year.

At brick-and-mortar stores, the changes are also noticeable. A Goodwill representative told PEOPLE donations were up as much as 30% year-over-year in some markets in the month of January. Buffalo Exchange, another popular storefront, told TIME that winter is normally a “quiet season for us until spring cleaning kicks in.” But that’s not at all the case this year, as stores are putting out additional racks to accommodate a 20-30% increase in inventory.

“A large majority of newer sellers and many of our regulars attribute their motivation to the Tidying Up show,” a representative told TIME. “A few years ago, with the book’s release, we also saw a new wave of sellers coming in. We’re really excited for the movement. It’s introducing many people to resale fashion and the process of recycling their clothing.” 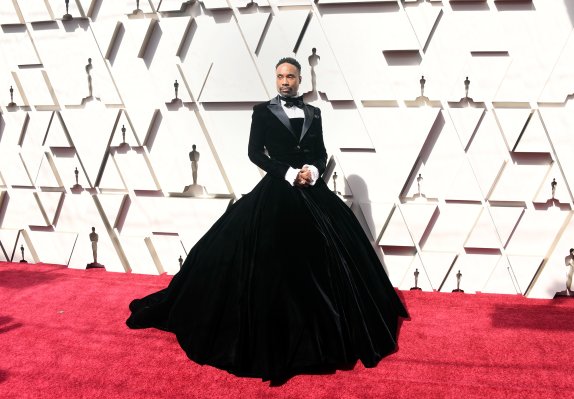 Here's Why Billy Porter Wore That Remarkable Gown to the 2019 Oscars
Next Up: Editor's Pick