A 19-year-old man has been arrested for attacking an 81-year-old wearing a MAGA hat in Somerset, N.J., prosecutors say.

Police were called to a grocery store in Franklin Township, outside New Brunswick, on Monday to investigate a report of a fight.

When they arrived, the 81-year-old told police he had been confronted by a man over his “Make America Great Again” hat as he left the store with his groceries.

A brief verbal confrontation allegedly ensued, after which the victim attempted to leave the area. As he turned to walk away, the assailant – identified by police as Ryan M. Salvagno, 19 – was able to grab the victim’s hat, prompting a struggle, according to prosecutors.

Salvagno then allegedly took the victim by the arm and threw him to the ground, tipping over the elderly man’s cart of groceries and throwing the hat to one side, prosecutors said.

Police say they found the victim suffering from “minor injuries” upon arriving at the scene.

MAGA hats, which President Donald Trump made popular during his 2016 election campaign, have become divisive – with some bars and restaurants banning customers sporting the red headwear. 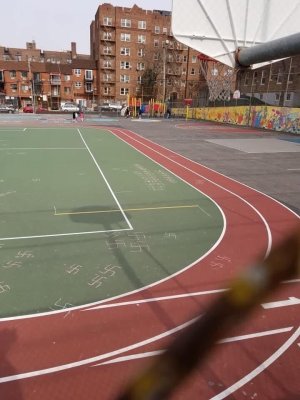