The 5 Funniest TV Shows Ever

We asked comedy greats to name the five works in their fields that influenced them the most and made them laugh the hardest. The sitcoms that Michael Schur has created over the last decade are among the most cherished in the TV landscape: Parks and Recreation, Brooklyn Nine-Nine and The Good Place. Schur has found humor in both the mundane and the metaphysical, imbuing every group of characters he creates with warmth and compassion.

The best comedy, and maybe just flat-out the best TV show, of all time. The characters were three-dimensional, the setting perfect, the actors so real and funny, the writing so sharp, and the relationships so vivid and specific. They started with the greatest comedy cast ever assembled–and then added Woody Harrelson, Kelsey Grammer, Bebe Neuwirth and Kirstie Alley.

Genre-defining and obviously massively influential. For world-building, the only show that comes close to rivaling it is The Wire. And The Simpsons is much funnier.

It was the first “grownup” show I thought was funny. That cast was ridiculous. Besides Mary, who set a standard for “sitcom lead” that everyone since has had to live up to, they rolled out Ed Asner, Ted Knight, Cloris Leachman, Gavin MacLeod, Betty White and Valerie Harper, the most underrated comedy actor in the canon.

Florence was my favorite character on The Jeffersons, so I followed Marla Gibbs to her new show like I was following my favorite band on tour. Sandra’s final-round answers, on the episode in which the Jenkins family goes on Family Feud, make that one of my all-time favorite sitcom scenes.

I recorded all the episodes on PBS and watched them over and over. In high school, my friends and I mounted a stage production of 20 or so sketches. The Python troupe members are the all-time world champs at silliness, which is still–if I’m being completely honest–my favorite genre of comedy. 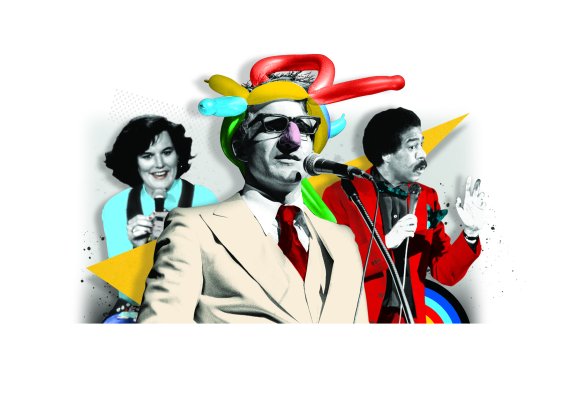 The 5 Funniest Stand-Up Specials Ever
Next Up: Editor's Pick