Why the Pope's Summit on Abuse Disappointed Some Survivors

Pope Francis celebrates Mass in the Vatican on Feb. 24, the final day of his landmark sex-abuse summit
Giuseppe Lami—AFP/Getty Images
By Ciara Nugent

Pope Francis arrived at the Vatican in 2013 promising “decisive action” on the child sex-abuse crisis that has racked the Catholic Church for at least three decades. Survivors around the world had told of horrific assaults by priests and callous cover-ups by senior clerics; in the U.S. alone, a 2004 church-commissioned report recorded over 10,000 accusations against more than 4,000 priests. Since then, the evidence has only grown. Yet advocates say Francis has offered little to restore the moral authority of the church beyond strong words.

Much then was left riding on the landmark summit the Pope called for Feb. 21–24. Nearly 200 bishops, Cardinals and other senior clerics gathered in the Vatican to hear recorded testimony from survivors, listen to speeches and hold group discussions, all with the aim of getting on the same page. As if to announce a new seriousness of purpose, the church expelled the former Archbishop of Washington, D.C., Theodore E. McCarrick, just days before, on Feb. 16–the first Cardinal to be defrocked over the sexual abuse of minors in modern times. Francis used the summit to call for an “all-out battle” against abuse, and church leaders hailed it as an unprecedented confrontation with the ugliest parts of their organization. “I am convinced that this was a moment of deep transformation,” Father Hans Zollner, one of the church’s top experts on child protection and the summit’s organizer, tells TIME.

But many activists and survivors expected more. Francis offered no detailed plan on how to prevent abuse, or binding rules on how to deal with abusers and cooperate with law enforcement. A promise to issue a new guidebook for bishops received short shrift from advocates. “Over the years, we’ve seen many church leaders write new guidelines, which are then developed, watered down, published and ignored,” says Colm O’Gorman, an Irish survivor of clergy abuse who now heads the Irish branch of Amnesty International. “There’s nothing unprecedented about this.”

The Pope’s challenge is magnified by uneven attitudes across the church’s many regions. In countries like the U.S., Canada, Australia, Spain, Germany and Ireland, the lengthy list of scandals and revelations has become part of the public consciousness, and top-level clerics are finally facing justice. On Feb. 26, for example, an Australian court revealed that Cardinal George Pell, formerly Francis’ top financial adviser, had been found guilty last year of molesting two choirboys in the 1990s.

But in much of Eastern Europe, Latin America, Asia and Africa–regions that have become crucial for the future of the church as its membership has declined in Europe and the U.S.–no such reckoning has occurred.

In areas where sexuality and sexual violence remain taboo subjects, there is less civil-society momentum to turn abuse into a church priority, and the risk to survivors for speaking up is much greater. In the Democratic Republic of Congo, for example, the watchdog group Bishops Accountability says the lone prominent survivor of abuse was ostracized by his family when he came forward. Sister Veronica Openibo, a Nigerian-born nun who addressed the summit with a scathing criticism of the clergy’s “mediocrity, hypocrisy and complacency” on abuse, later told a press conference that some African bishops “were not happy” with her focus. They “felt there were more important issues in Africa,” she said, giving child soldiers and child trafficking as examples. Juan Carlos Cruz, a Chilean survivor of sex abuse as a minor, tells TIME that he struggled for years to be believed by clergy in his country and that attitudes have barely evolved in the rest of Latin America. “Bishops generally don’t see this as a problem that plagues their particular country or church,” he says.

Some advocates believe the Pope is also afraid to rock the boat by moving too fast. He is already struggling to bridge a divide between his liberal wing of the church and conservatives who disapprove of his relaxed stances on issues like homosexuality and second marriages. “Keeping the church together is clearly his priority,” says Anna Frankowska, a lawyer at the Polish survivors’ group Have No Fear, who met with Francis ahead of the summit to present him with a report accusing 24 Polish bishops, some still active, of covering up abuses as recently as 2012. “The Pope clearly gets it, but he’s scared of upsetting bishops who don’t.”

Zollner says Francis believes he must unify the clergy on the importance of dealing with the crisis before issuing top-down rules. “The Catholic Church is not a multinational organism, like one big company where we all have the same way of talking about things,” he says.

Cruz, who was among the survivors that addressed the summit in person, agrees that the summit was a crucial first step. “I know some people are disappointed, but I always realized that this wasn’t going to be solved in a few days. I value that Pope Francis is doing this. I’m really hopeful.”

For many survivors, though, the Pope has a duty to lead concrete change throughout the church, and the summit was the time to start. “He missed the perfect opportunity,” says Matthias Katsch, a German survivor and campaigner with group Eckiger Tisch. He says a churchwide canon law on abuse is essential to achieve justice for the horrors of the past and to bring to light hidden ongoing crises. “He thinks we need to give everyone more time to understand the issue before we do that? That’s putting children at risk and leaving survivors to suffer endlessly. It’s a disaster.” 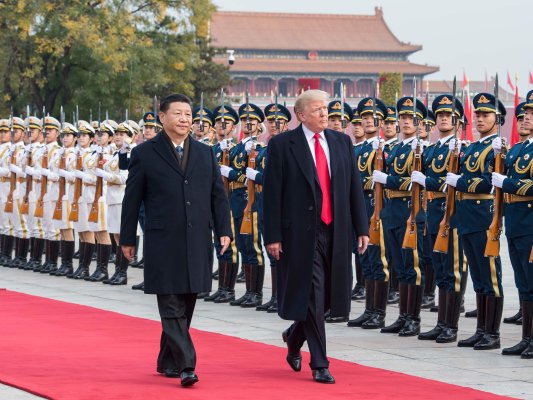 Deal or No Deal, the U.S.-China Relationship Is Beyond Repair
Next Up: Editor's Pick