At a press conference in the Vietnamese capital, Trump said talks broke down because Kim demanded that the U.S. lift all sanctions on North Korea. Downplaying the setback, Trump said negotiations would continue and that he thinks the two leaders will “end up being very good friends.”

“They wanted the sanctions lifted in entirety, and we couldn’t do that,” Trump said, portraying Kim’s proposal as a blanket removal of sanctions in exchange for the closure of the Yongbyon nuclear facility, North Korea’s most important research and production site. “We had to walk away from that.”

The offer was ultimately deemed unacceptable, Trump said, because North Korea has other nuclear weapons and missile facilities. “You have to be prepared to walk away,” he said. “We actually had papers ready to be signed, but it just wasn’t appropriate.”

Prior to Trump’s trip, the White House tried to tamp down expectations for the second summit with the reclusive dictator. However, Trump said in Hanoi that he and Kim have a “great relationship.”

Before talks ended on Thursday, Kim took the rare step of answering a question from a foreign journalist, saying, “It’s too early to tell, but I wouldn’t say I’m pessimistic. For what I feel right now, I do have a feeling that good results will come out.”

Trump landed in Hanoi early this week eager for a victory as drama was unfolding in Washington over speculation that Special Counsel Robert Mueller is preparing to issue his final report on the federal investigation into possible election interference by Russia.

Then on Wednesday, late into the night in Vietnam, Trump’s former lawyer Michael Cohen laid into the President during a five-hour testimony before the House Oversight Committee, deriding him as a “racist” and a “conman” live on national television. Republican lawmakers sought to discredit the disgraced attorney, who pleaded guilty in August to tax evasion, campaign finance violations and making false financial statements.

Asked about Cohen’s testimony, Trump said he tried to watch it from Vietnam. “I didn’t watch too much because I’ve been busy,” Trump said, calling Cohen’s accusations “incorrect” and claiming he was at the center of a “witch hunt.”

Trump conceded, however, that Cohen, “didn’t lie about one thing, he said no collusion.”

On the other side of the world, North Koreans awoke Thursday to state-owned newspapers splashed with color photographs of Trump and Kim smiling and shaking hands before their nations’ flags. In Vietnam, the front page of an English-language newspaper read: “Give Peace a Chance.”

Trump and Kim’s two-day summit was the second such meeting after their historic handshake in Singapore last June made them the first sitting leaders of the U.S. and North Korea ever to meet face to face. The encounter culminated with a vague document that raised more questions than it answered about how and when Kim would eliminate his nuclear arsenal and what the U.S. promised in return.

In Hanoi, Trump and Kim had been widely expected to sign a declaration of peace on the peninsula, a symbolic gesture that would have paved the way toward a formal treaty to end the Korean War. The 1950-53 conflict ended with an armistice, not an accord, and the bitterly divided peninsula has since lived under a fragile truce protected by a U.S.-led U.N. Command of troops stationed mostly in South Korea and Japan. 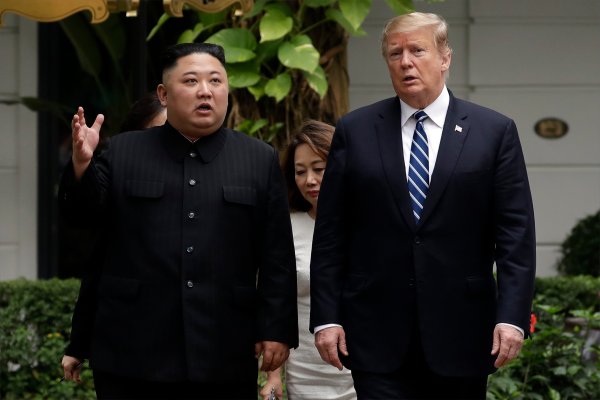 Watch: Trump-Kim Summit Ends Without a Deal
Next Up: Editor's Pick