9/11 Survivors Are Still Getting Sick. Now They're Worried They Can't Afford Their Bills

On Sept. 11, 2001, Marines veteran Charles “Chuck” Flickinger walked into the local firehouse in Lake Carmel, N.Y., and volunteered to join the rescue effort. He arrived at Ground Zero in Lower Manhattan by nightfall, and was sent underneath the ruins of the World Trade Center to look for survivors.

When he returned home three days later, his wife, Charlotte Berwind, says he was changed. For a few years, he found it difficult to speak to anyone, and his evenings were disrupted by night terrors and sleepwalking. However, Berwind tells TIME he also came home with a new sense of purpose. He returned to volunteer at the fire department, trained to become a registered nurse, and helped with the rescue effort after the 2010 earthquake in Haiti, Hurricane Katrina and Hurricane Sandy.

It was years before the couple learned the full cost of Flickinger’s volunteer efforts: He was diagnosed with cancer at the border of his esophagus and stomach on April 11, 2016, and died less than nine months later, on Jan. 1, 2017. He was 56.

Berwind says doctors gave them a clear explanation for his illness — it was certified by the World Trade Center Health Program and the Mount Sinai School of Medicine as related to his exposure to the Sept. 11 attacks. That certification could make a major difference for Berwind, since it will likely give her access to one of the biggest safety nets for 9/11 survivors and their families: the September 11 Victims Compensation Fund, which provides compensation for losses related to 9/11 exposure. As of Feb. 15, the fund has distributed nearly $5 billion for 21,000 claims for illnesses and deaths that doctors have certified were caused by the attacks, according to the Fund. The Fund’s average decision was worth $240,470.

In February, the official who leads the program — Special Master Rupa Bhattacharyya — announced dwindling funds will force them to slash future payouts by 50% to 70%, a figure that worries those still waiting for compensation, including Charlotte Berwind.

“Please don’t forget us,” says Berwind. “To [some people], 9/11 is over. It might as well be Pearl Harbor. But, unfortunately, thousands upon thousands of people are affected.”

Throughout his illness, Flickinger benefited from the World Trade Center Health Program, which provides medical monitoring and treatment services to eligible 9/11 responders and survivors at no cost. However, Berwind, 65, says she’s suffered financially since her husband’s death. Berwind supported him while he was training to become a certified nurse, expecting that he could help support her through her retirement. Instead, she was forced to take time away from her catering business to care for him through his illness. She’s now in the process of relocating to Mexico to cut down on living expenses. She’d prefer to stay near her friends and family in New York, she says, but she feels she can no longer afford to live there without full payout from the Fund.

Her lawyer, Matthew J. McCauley — a former NYPD officer who exclusively works on 9/11-related cases — says that Charlotte Berwind is in a particularly vulnerable situation because her husband was a “true volunteer.” Despite responding to 9/11, her husband was not eligible for any death benefit or pension.

“Chuck didn’t work for any agency at the time of 9/11, so he’s not eligible,” says McCauley, who also volunteered on 9/11. “The Victim’s Compensation Fund is his wife’s only resource to get compensation for his death.”

A memorial to Charles "Chuck" Flickinger, who volunteered as a firefighter on 9/11
Photo courtesy of Charlotte Berwind

For Berwind, the government has disappointed the 9/11 community by failing to keep its promises.

An added worry is that the Victims Compensation Fund program is scheduled to end on Dec. 18, 2020, and many supporters of the program warn that more people likely will get sick or die in coming years. The health impacts of 9/11 have been broader than anyone could have predicted.

Proponents of the Fund, including the firefighter’s union and advocates for first responders, say people like Berwind should be fully compensated — and that the program should be made permanent so that people who develop additional health problems, or die from their illnesses, will be protected.

Last month, a bipartisan group of New York legislators gathered with New York City firefighters and police officers in Washington D.C. to announce a bill to extend the program for 90 years.

“We must not force our 9/11 heroes to go through the same exhausting process again,” New York Sen. Kirsten Gillibrand, who is also a 2020 Democratic presidential candidate, told the crowd. “The 9/11 death toll is still growing. 9/11 first responders are still suffering … Almost every day, another 9/11 survivor or responder dies from a 9/11 related cancer.”

Officials from the Department of Justice, which runs the program, warn that people exposed to the toxins released during the Sept. 11 attacks and their aftermath may not even be experiencing the full health effects yet. For instance, the World Trade Center was known to contain asbestos, which may cause mesothelioma — a deadly disease that can take decades to appear.

The Fund, meanwhile, maintains that its hands are tied.

“I am painfully aware of the inequity of the situation,” Bhattacharyya said in a statement. I also deeply regret that I could not honor my intention to spare any claim submitted prior to this announcement from any reductions made due to a determination of funding insufficiency. But the stark reality of the data leaves me no choice. If there had been a different option available to me, I assure you I would have taken it.”

Some members of the 9/11 community, like 62-year-old Marty Singer, are frustrated that health problems that only emerged years later mean they could be stuck with expensive medical bills.

Singer was working at J&R, an electronics and music retailer, near the World Trade Center on Sept. 11, 2001. After a triage center was set up in front of his building, he helped first responders by cleaning their eyes out with saline solution and helping to serve them food.

“I was covered head to toe with white dust,” says Singer. “I didn’t really understand the implications of it.”

About 14 years later, he was diagnosed with multiple myeloma, a rare form of cancer, that doctors certified was caused by the attacks, Singer says.

Now permanently disabled, Singer says has been compensated by the program for his cancer, but is filing additional claims for respiratory and cardiovascular issues. Although he is concerned for his own future, Singer says that he is especially fearful for people who have not gotten sick yet.

Firefighters walk towards one of the World Trade Center towers before it collapsed after a plane hit the building Sept. 11, 2001 in New York City.
Jose Jimenez/Primera Hora—Getty Images NA

“I’m completely outraged at the fact that the government would even consider [ending the program],” Singer says. “It’s going to be more and more people getting sick.”

Craig Sotkovsky, 53, assisted with the rescue effort and later developed cancer. He said that he had hoped to pay off credit card bills and loans he had leaned on to get through his illness.

“Of course I’m angry, I have a wife and daughter,” Sotkovsky said. However, he added that he doesn’t regret helping at Ground Zero. “I was going to be there anyway, regardless.”

John Feal, founder of the 9/11 first responders advocacy group Fealgood Foundation, says that he and other advocates are hoping that current efforts to extend the program will create lasting changes.

“This is my 269th trip to Washington D.C. for this in the last 15 years. We have over 1,400 meetings under our belt. We’re tired, we’re sick, many of us are dying, we want to be left alone,” says Feal, who was seriously injured during the recovery effort.

“How could our country turn our backs on the people that were there to help our nation when our nation needed them the most?” Lemonda says. “It’s a promise the government has made to those people back in 2001.”

The original version of this story misstated John Feal’s last name. It is Feal, not McFeal. 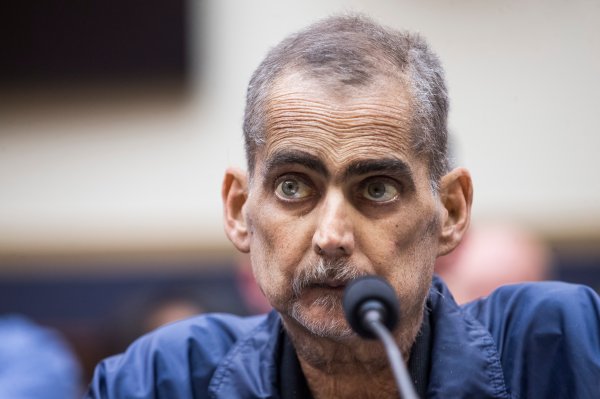