Lawmakers Clash Over Accusations of Racism During Michael Cohen Hearing

An accusation of racism led to a heated exchange between two members of Congress during Michael Cohen’s marathon testimony Wednesday.

During his testimony to the House Oversight Committee, Cohen accused President Donald Trump of racism, alleging that he had made bigoted statements about black voters and countries with black leaders.

In response, Republican Rep. Mark Meadows, who is white, pointed to one of Trump’s African-American employees and now a member of the Administration, Lynne Patton, who was in attendance at the hearing.

“She says that as a daughter of a man born in Birmingham, Alabama, there is no way she would work for an individual who was racist,” Meadows said.

Later in the hearing, Democratic Rep. Rashida Tlaib, the first Palestinian-American to serve in Congress, indirectly criticized Meadows, calling it “racist in itself” to use a black woman “as a prop” and arguing that it did not disprove the claim.

“Just because someone has a person of color — a black person — working for them does not mean they aren’t racist,” Tlaib said.

Meadows was visibly outraged by Tlaib’s statement, and demanded that her statement be stricken from the record. Under House rules, lawmakers are not permitted to impugn another lawmaker’s motives or insult them personally.

Meadows noted that his nieces and nephews are “people of color” and that “it’s racist to suggest” he would use a black woman as a prop.

Tlaib noted that she had not actually called Meadows the name racist, but was describing a certain kind of behavior as racist. She added that she was saying that if “someone” were to behave in such a way, it would be racist.

The committee’s chair, Rep. Elijah Cummings, who is black, ultimately sided with Meadows, and Tlaib clarified her comments to say that she did not intend to call Meadows racist.

During the hearing, Democratic Rep. Brenda Lawrence, who is black, also indirectly criticized Meadows for bringing Patton to the hearing.

“To prop up one member of our entire race of black people and say that nullifies that is totally insulting,” Lawrence said. 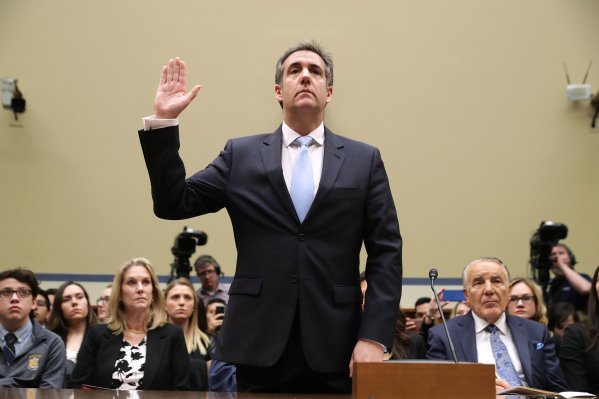 The 13 Most Explosive Claims From Michael Cohen's Testimony
Next Up: Editor's Pick